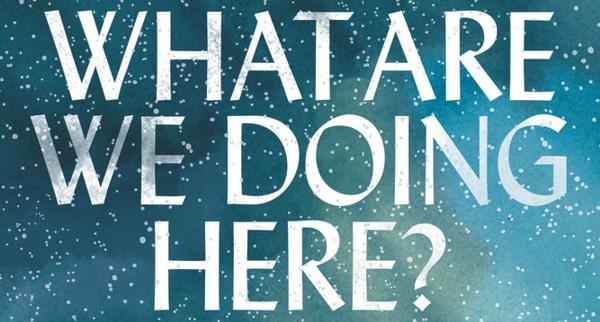 Perhaps few undergraduates have found their worldview transformed by reading a footnote in Jonathan Edwards’ The Great Christian Doctrine of Original Sin Defended, but so it was for Marilynne Robinson. Edwards’ point was that the consistency of things depends on other things. Moonlight depends on sunlight ... and certainly a profound sense of connectivity animates Robinson’s theology. God is ‘pervasively present and engrossed’ in God’s creation – a prime instance of ‘cosmic altruism’, which, for me, has a retrospective echo in Ignatius Loyola’s sense of ‘God in all things’. Ignatius and Calvin are pleasantly at one with Robinson’s frequently professed Calvinism – a clear invitation to readjust our image of both Calvin and Robinson’s beloved Puritans.

Robinson is best known as a novelist (2004’s Gilead is a wonderful piece of re-readable writing) but she has produced several books of essays and talks – five prior to What Are We Doing Here? Her title is precise: the stress is on doing, on how we proceed. So Robinson is sharply perceptive about the cultural hegemony of simplified ideas in market economics, evolution, psychology, social science. She has a soft spot for the marvels of physics and cosmology, the bewilderment of ‘dark matter’. But too often our thought systems become the ‘antibiotics of the intellect’. They reduce our sense of human capacity, largely by side-lining the elusive reality of consciousness. If the ‘explanations’ of the universe or of humankind that inhabit our cultures drift towards a ‘nothing but’, a reductionist or exclusive shape, then wonder tends to shrink. Similarly – and pointedly – if religion does not welcome wonder, then religion shrivels and finds itself in what Robinson calls a ‘defensive panic’.  One of her words of recognition for wonder is ‘beauty’, which she sees ‘as a conversation between humankind and reality’.[i]

Robinson knows that in its heyday, theology was also grossly inhibiting and side-lined a good deal of reality, but theology can use – and has used – a language of beauty, grace and peace. It does not have to proceed by way of exclusion. So the language of theology should be ‘capable, capacious and responsive’. There is a long, fine chapter on the ‘theological virtues’ of faith, hope and love. Edwards (1703-1758), one of Robinson’s favourite Puritans, quotes authors not ‘to argue from authority, rather from affinity.’ This looks like a well-discerned choice – that is, a decision emerging from experience that has been worked at and mined. Robinson herself works at, ‘reauthorizing experience, felt reality, as one important testimony to the nature of reality itself.’ For me, once again, this resonates with Ignatius’s Spiritual Exercises, which are concerned to sift imagination, desire and choices, large and small.

Robinson’s reason for writing theologically is pointed: ‘only theology supports an ultimate coherency that can embrace equally the true, the tentative, and the flawed, as reality itself embraces them’.  We are indeed ‘as intrinsic a part of reality as mice and moonlight.’

Robinson, who has been reading a fair amount of history, highlights not just literary but political connections between the English Puritans of Oliver Cromwell’s time and the Puritans of New England – some New England Puritans understandably fought for Cromwell’s Parliamentarians during the English Civil War. Robinson also imagines the American Civil War as between the Puritan north and the Anglican south. The Puritans were, for Robinson, both politically radical and deeply perceptive about God and our experience of God.

Sifting through our experience – what is of God and what is not of God? – is a major concern for what Ignatius calls ‘discernment’.[ii] And inevitably Robinson’s Puritans do much sifting: Jonathan Edwards deals with ‘inwardness’ and conscience. His Treatise Concerning Religious Affections is well aware that there are ways of ‘believing’ that turn into self and institutional deception. The ‘Great Awakening’ in America had much need of discernment, as do religious movements of our own time. Discernment, as Pope Francis reminds us, should be a central ingredient in what we are ‘doing here’.

Robinson says she has arrived at a universalism that ‘precludes any kind of proselytising.’ Well her essays are not shy of either polemic or advocacy – but God’s favour is not reducible to membership of any particular denomination. Quite so: as Robinson says, we are sometimes ‘more particular than God’. Perhaps a universalism of respect, not shy of a polemic and which favours a wider sense of humankind than is usual – a God-favoured viewpoint – would be truly good news.

The essays have a large sweep and are also full of relevant particularities, some of which are contemporary. In a moving account, Robinson’s mother and her friends become depressingly entangled in a Fox News culture. The current President of the United States receives no mention, but Robinson is delighted by Barack Obama.

One pleasing particular to report is that Robinson, born in Idaho, enjoys teaching creative writing at the University of Iowa and yes, she is writing anther novel…

[i] Another favourite word is ‘givenness’ – see Robinson’s The Givenness of Things: Essays (Virago, 2015).