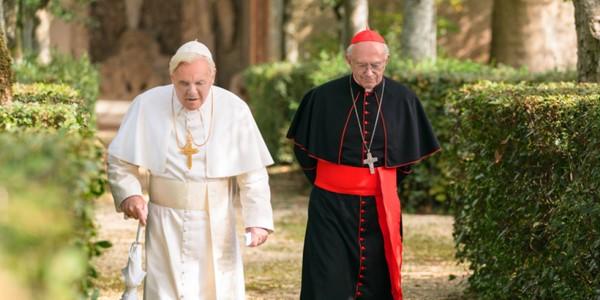 ‘With thanks to St Francis’. A nice touch at the end of the credits hints that this new film, directed by Fernando Meirelles and written by Anthony McCarten, and which begins with the story of il poverello, is rather more committed to the Catholic faith, and specifically to a Franciscan take on it, than one might have thought possible from the Vatican-blockbuster genre. Although it has been unusually well received outside Catholic circles, more than one secular commentator has felt obliged to intone a note of moral disapproval: how can the papacy be the subject of a jovial, feel-good movie? If The Two Popes does nothing else, it is a healthy reminder of the joy that is at the heart of the Catholic Church, faced as she is with all the challenges we know so well.

But it does, of course, do much else. It takes us to the heart of a credibly reconstructed Vatican City State, with all its strange allure, and leads us straight into a fictional scenario which supposedly took place prior to the astonishing resignation of Pope Benedict XVI. Preceding the announcement of his abdication on 28 February 2013, the film would have us believe that a defeated Benedict invited the Cardinal Archbishop of Buenos Aires, his runner-up in the 2005 conclave, to Rome, to size him up as a candidate to succeed him and to steer the Church on a now inevitable course of reform. The encounters of the two prelates over a few short days provide the drama as they move from frosty hostility to mutual understanding and finally friendship.

Right from the opening scene, set in a favela of Buenos Aires, we are taken on a whirlwind tour of Argentina, her Church and recent history, the papal households of Castel Gandolfo and the Vatican, as well as the inner landscape of two complex men. It is all offered up with unflagging pace, knowing humour (including a wonderful parting shot at the English language in which most of the script of this largely Italian-Argentinian-American film is written), luscious visuals and a near-perfect observation of Catholic liturgy, language and manners. The film does not dodge the difficult questions but nor are they allowed to dominate. And it will surprise no-one that the two superb actors, Anthony Hopkins (Pope Benedict XVI) and Jonathan Pryce (Pope Francis), give the performances of their careers. No wonder the present reviewer was gently moved to tears and left with a lasting sense of grace.

All of which should serve to make the discerning viewer just a little sceptical. Cinema is, after all, the most manipulative art form, and the serving-up of sentiment is usually just a technical matter. There are a number of reasons to be suspicious that this ecclesiastical drama might subtly be serving a hidden agenda. For one thing, the plot’s treatment of the Catholic religion comes awfully close to repeating a very old narrative: rigorous, doctrinaire conservative meets affable progressive and realises how wrong he has been. It is not so much a mere narrative as the foundational myth of the liberal order which has unceasingly to rehearse its reason for being by telling precisely this story and variants of it. Is this, then, just another iteration of that myth? Not quite.

Others will see another ‘buddy movie’ about an unlikely couple overcoming their disagreements and realising they can be friends in spite of temperamental differences. That’s a story with political implications too, but again, there is more going on here.

Still others will get stuck in a very reasonable objection, the Mantel Problem: shouldn’t a writer be scrupulously honest when they portray really existing human beings, especially when using them as literary devices in an argument? It’s a problem that can only be exacerbated by the fact that these two men are still very much alive and their storylines, as it were, still developing. Who is Anthony McCarten to tell us who the real Joseph Ratzinger or Jorge Mario Bergoglio are?

On this last point, one can very reasonably doubt that the playwright has either character perfectly right. Both men’s public personas are baffling in their own way; they are figures of contradiction. The gentle author of Caritas in Veritate and Deus Caritas Est was also once the legendary Panzerkardinal and ‘hard-line traditionalist’ of media lore, and prior to that the progressive reformer of Vatican II. The erstwhile authoritarian Jesuit Provincial is now the ‘wounded shepherd’ for some and a ‘dictator pope’ for others. McCarten’s script makes Ratzinger out to be a great deal more worldly than the dreamy, genial Bergoglio, so eager to cast off the trappings of power. I’d be very surprised if that were true. Nor is the film’s focus on the polar oppositions between the two Popes particularly insightful. It is the continuity of their teaching and vision – which scarcely receives the consideration that it deserves in actuality, either – that is more striking and significant.

Reasons for caution, yes. But ultimately I don’t think we need to worry. The real point is that the various narrative strands of this film and the portrayals of the two men are not ends in themselves but rather serve a bigger story, one about God. It is the living God of Christian faith who is the real protagonist here, no dead theory or abyss of silence, but a God who intervenes decisively to change lives. The presence of that God is palpable as he keeps the characters moving, often in surprising ways, as he reconciles them and as he opens the door to new futures and possibilities. The young Bergoglio’s mysterious and providential real encounter with a priest in confession, recorded poignantly if not with perfect accuracy, is the reason he is Bishop of Rome today and not a happy porteño enjoying playing with his grandchildren. If you do stay right to the end of the credits, you’ll find a wistful image of what it first meant for him to enjoy instead the company of Jesus. And that’s where we all need to end up, whatever we may think of the script’s conceits or even the merits of two great Popes.

The Church becoming synodal, part 2: The preferential option for the poor and the way forward