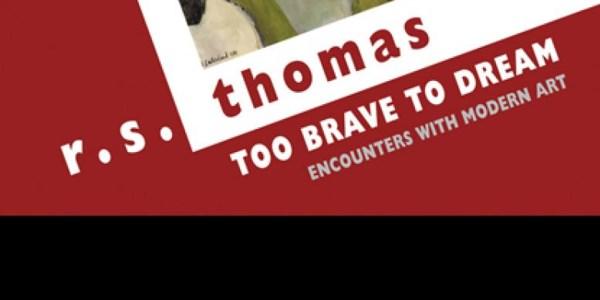 Images of spies turning over the library, upending books and shaking them to discover hidden documents, come to mind. In two books owned by the late R.S. Thomas, Herbert Read’s Art Now [1933] and Surrealism [1936] – Thomas’s library had been acquired by the R.S. Thomas Research Centre in Bangor University – there were some three dozen unpublished poems. The manuscripts, which can be dated between 1987 and 1993, are ekphrastic poetry – poems ‘about’ the paintings reproduced in Read’s books.  It was an extraordinary find.

In a handsome volume, Tony Brown and Jason Walford Davies[i] have placed these poems alongside colour reproductions of the relevant paintings (in Read’s books the reproductions are in black and white). Whether the poetry does or does not need the paintings in order to be readable is a moot point, but it is splendid to have both in one volume. There are 21 paintings from Art Now and twelve from Surrealism, plus one poem responding to a greetings card found at the back of Art Now. Some artists merit more than one picture (three from Yves Tanguy and four from Salvador Dali) and three paintings (by André Derain, René Magritte and Pablo Picasso) provoke, or evoke, two poems. The title, Too Brave to Dream, comes from Thomas’s poem on Henry Moore’s moving and evocative ‘Shelter Drawing’ of 1941.

Leaving aside the long and complex history of the word ekphrastic, the phrase ‘ekphrastic poetry’ refers to poetry which comes from the poet’s experience of looking at a painting. It’s not the same as a description of the painting, which may be more or less ‘accurate’ even if a description can also be revelatory. Nor does it seem to be the same as poetry about, for example, a ‘natural’ landscape, simply because the painting is what a painter has made and the landscape is not. However, we are ourselves ‘nature looking at nature’[ii]. So the situation is not as clear as all that. Perhaps ekphrastic poetry is indeed poetry which expresses something of what happens when a poet encounters a painting and writes poetry. Astonishingly there is some sharing of imagination, maybe between painter and poet, the reader of the poems, the postcard purchaser in the Art Gallery shop. The population of the imaginative community grows.

Two striking paintings are Jindrich Styrsky’s ‘Man Fed on Ice’ (which Thomas knew as ‘The Man of Ice’) and ‘Hlas lesa – The Voice of the Forest II’ – by Toyen (Marie Cerminova). ‘The Voice’ shows what Thomas first takes to be an owl (one of his favourite predators) but there are no owl features: ‘What name shall we give / something that has nothing / but existence to deserve / tenure?’ Here Thomas’s gaze is inwards as well as outwards: there is ‘an echo / far down in us’ which responds to what ‘looks at us’ – but does so ‘without eyes, / and without a mouth speaks.’ Here, with an acknowledged echo of Wallace Stevens, there is an inner and outer awareness which are differentiated and connected. Thomas’s imagination works both ways and sustains a pinpoint balance between what is seen and how it resonates with the person who sees, who truly looks. Styrsky’s ‘Man Fed on Ice’ suggests to Thomas, or Thomas discovers, ‘at the same time / it is not thought but / love will bring on the thaw.’ The original title (rather than Read’s ‘The Man of Ice’) suggests we might indeed wonder about what in our lives feeds, sustains and directs our imagination.

No doubt Read’s reproductions fuelled Thomas’s imagination. The introduction gives an engrossing and charming picture of the Thomas family playing cards, the cards being postcard reproductions of paintings – some 300 in the pack. Once dealt there would be bargaining, rule-keeping, identification and appreciation. It was very much a talking and looking game. Elsie, Thomas’s first wife, was an artist and a strong painterly and literary influence; Thomas did not frequent art galleries and would have seen few original paintings. Read’s reproductions would have fitted both the family game and – given their often undeniably bleak character – Thomas’s long and varied concern with ‘God’, a larger ‘problem’ than church.

Although ‘God’ appears infrequently in the new collection, the appearances are striking. Yves Tanguy’s 1936 ‘Extinction of the Species’, provokes or evokes a terrain impossible to look at: ‘…The appearance / is of a landscape God / looked at once and from which / later he withdrew his gaze.’ The ‘once’ is ambiguous about the duration of God’s gaze and make the lines rock as perception shivers. In any event Thomas – or the fictional writer of the poem – looks at what God does not now regard, or wonders about the God who does not look.

That well-considered and instructive introduction is also illuminating on the ‘autobiographical turn’ that Thomas’s poetry took on his retirement from priestly ministry in the Church in Wales. Difficulties he kept from his parishioners ‘had him now all to themselves’ (p. 19, quoting Thomas). The extent to which such homiletic reticence is good or bad ‘pastoral’ practice is a delicate question. Parishioners may have problems similar to those of the pastor and might have welcomed reflection on common issues. Even if not taken to extremes this approach can often lead to difficulties with ‘church’ – which Thomas certainly had. In a 1995 collection there are sharp enough lines: ‘We have over-furnished / our faith. Our churches / are as limousines in the procession / towards heaven. But the verities remain…’. [iii] Indeed Thomas does not over-furnish. And the ‘verities’ are few and stringent: ‘…one crumb of bread / on the tongue for the birdlike / intelligence to be made tame by.’

We live in an imagined, not an imaginary world, hence the health of our imagination is crucial. Our world is all at once empirical, full of feelings, made up of science and literature, technology and institutions, politics and religion – a myriad of different relationships. Indeed it needs courage to imagine well, to search for the place where our directed imagination and truest desires meet. What are the best narratives available? What might be what Seamus Heaney called ’The diamond absolutes’?[iv]  We need an imagination not usurped by fancy or fantasy, which can turn ‘events into experiences’.[v] Thomas was good at such alchemy. If ‘too brave to dream,’ Thomas was also courageous enough to imagine.

[ii] See Max Oelschlaeger, The Idea of Wilderness: From Prehistory to the Age of Ecology (Yale University Press, 1991).

[v] The phrase is from Ian Summerscales, Talk of the Soul, Saying God: Reflections on Meister Eckhart, Fernley Hall Lecture, 1994.

Zealot: The Life and Times of Jesus of Nazareth