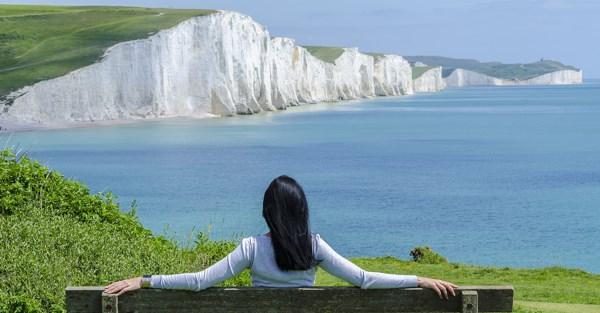 Whether you are looking forward to putting your feet up or preparing for an action-packed adventure, the benefits of a good holiday are invaluable, says Gerald O’Mahony SJ. Slowing down and gearing up can both be ways of following God’s will if they lead us towards consolation.

I have been asked to explore the biblical, Ignatian and other foundations of a healthy and positive approach to rest and holidays, encouraging readers to really make the most of whatever break they may be intending to take. One thought that comes to mind is that many people will be reading this as they try to find courage and focus to keep going at their daily work with a holiday on the horizon. But perhaps best to start at the beginning.

One Old Testament practice of rest and recreation gets a mention in the gospels: the parents of Jesus are said to go up to Jerusalem for certain feasts and they go as pilgrims in caravans, the women in one camp, the men in another. As in all pilgrimages the world over there is socialising and diversion and change from normal routines. Coming to Jesus himself, the most obvious rest break he took was to sail away with the twelve to find a lonely place so that they could be by themselves for a change. We know that it did not work out, because instead of getting a rest from the crowds they had been dealing with, they found an even bigger multitude waiting for them on the shore. However, Jesus clearly thought that going away for a break was a good plan in itself. Another appealing habit of Jesus seems to have been to escape to Bethany when life got fraught, to the house of Martha, Mary and Lazarus.

The Sabbath day was moved to Sunday, but continued to be a day of rest for Christians. The Gospel of Mark is the first one to detail what Christians know as Holy Week, starting from late on Palm Sunday and ending on Easter Sunday morning. Sunday became the holy day, the day the disciples rested from work; Sunday was the climax of the week of re-creation, so God’s day of rest was observed on that day. As Christianity moved on into the early Middle Ages, many more days, about 40 in all, were designated as Holy Days, on which employers were directed to let their employees have a rest day. Once the ‘weekend’ idea took over, most of these privileged feast days were demoted again, being remembered simply as Days of Devotion – but they had served their purpose with poor people.

Now, to Ignatius and the Spiritual Exercises: what does Ignatius say about rest and holidays? One obvious thing is the fact that he places a space between the ‘weeks’ of the Exercises themselves, and also that he tempers the amount asked of the exercitant according to how busy he has kept them and their age and state of health. The thrust of the whole 30 days is to leave the exercitant in consolation, and consolation is more restful than desolation, every time.

I am fond of mathematics, and once I devised a mathematical way of talking about consolation and desolation.

On the scale, numbers zero to three represent moods of depression, from absolute zero to number one getting better, to number two better still, to number three nearly normal.

Seven, eight, nine and ten represent working too hard, number ten being the worst, breaking point. These seven-to-ten states may be either manic or panic.

The best place of all to be is Number Five, which I call the Still Point. If I am depressed, take steps to improve up towards Five. If I am working too hard, or getting carried away in some enterprise that is unreal or manic, then the thing to do is to stop, relax and slow down. Take a holiday.

Of course it follows that there are two kinds of desolation, but only one kind of consolation. My numbers zero to three are depression, but they are desolation. My numbers seven to ten are veering towards panic over a task too great or over some manic scheme that has lost touch with reality. Seven to ten are also moods or states of desolation, but the way down to Number Five is the opposite of the way up out of depression.

The Still Point is difficult to hold, but anyone working towards it, either from up or down, is in a place of safety. To find the will of God for me, the best strategy is not to work myself to the bone and do without holidays or rest, but to aim sensitively at reaching Number Five, the Still Point.

A gospel emphasis to bear in mind is that merit has its drawbacks. The elder brother of the Prodigal Son had slaved away in his father’s field year after year, only to find that his father made more of a fuss of his wastrel young brother – the father’s desires being equated by Jesus, the storyteller, to what matters most to God. Merit was not everything. Again, the 99 sheep in another story had been good as gold, never straying at all, when back comes the shepherd making a great fuss of the lost one, calling on his friends and relations to rejoice over the find. The 99 must have felt cheated, but then, merit is not everything. Yet again, the labourers in the vineyard who had toiled all twelve hours of the day felt cheated that those who had only clocked on in the last hour received the same wage as they did. Merit was not everything. The Pharisee who had ticked all the boxes, praying at the front of the temple and telling God how he had fasted and given alms, would have been astonished to know that in Jesus’s eyes the one who went away from the temple justified was the one who did not justify himself, the sinful tax-collector. Merit is not everything. It is better by far to step back a little and reflect on what it is that God really wants.

Another set of gospel images can help us not to set too much store by success in work or success in business. It is not flattering, but it is very valuable to bear in mind as the bottom line. Consider: there are two sides to a lot of the images used by Jesus. For example, there are sheep, and there are shepherds. Now I may be a poor specimen as a shepherd, but I am still loved as one of God’s flock of sheep. I may be a poor ‘light of the world’, but God’s light still shines on me. I may be a poor servant of God, but I am still God’s beloved child. I may be less than rock-like, but God is still a rock for me. I may be a poor collector of ‘coins’ (people with God’s image stamped on them), but I am still a precious coin myself with God’s image on me. I may not be a great guide, but Jesus continues to show me the way to go. And so on – I could name several more paired images. All it needs is a firm faith to cling on to the basic gift of God, in which one is passive, and just to do one’s best with the active, apostolic side.

Take the strange tale told in Chapter 17 of Matthew’s Gospel, about the time when the tax gatherers of the temple asked Peter whether his Master paid the temple tax or not. Peter said, ‘Of course he does’, but then went to ask Jesus if he did in fact pay. What it then comes to is Jesus saying that he and Peter, as children of God, do not have to pay taxes to God. But still he told Peter to go fishing and raise the money for them both as a voluntary contribution. The story of Adam and Eve had been interpreted to mean that work was a tax or burden imposed by God (see Genesis 3:17-19). Jesus here in Matthew’s Gospel is now saying that God does not impose taxes on his own children, so therefore work is a voluntary contribution asked of a child of God, and no longer a tax.

Holidays can of course involve hard work themselves, but let it be something-different-from-work hard work. People deciding to walk the Camino de Santiago de Compostela have to have stamina. All sorts of sports and pastimes, such as skiing, involve exercise or skill. My own favourite holiday over the years was to hire a four-berth yacht in Maldon for a week and sail with three companions down the River Blackwater, out to sea, along the coast and in to visit various other rivers. It took skill and good luck, but it was completely different from anything else in my life (except that dealing with tides and winds was ultimately an object lesson in discernment!).

There are of course major obstacles that can stand in the way of taking rest, or of enjoying a holiday. What if one is poor, scarcely able to make ends meet? What if one is homeless, unable to do anything but beg on the streets? What if you are married with three small children – you can perhaps afford a holiday, but a fortnight at the seaside may be more work than being at home, and more of the same? What if one is a millionaire, able to afford a luxury holiday anytime? Is that all right by God? The questions posed in this paragraph should not, I think, be allowed to spoil whatever holiday my readers may be planning. Enjoy the break, then come back refreshed ready to cope with awkward questions. So it seems to me.

Gerald O’Mahony SJ is a writer and spiritual director.

A time to keep silence