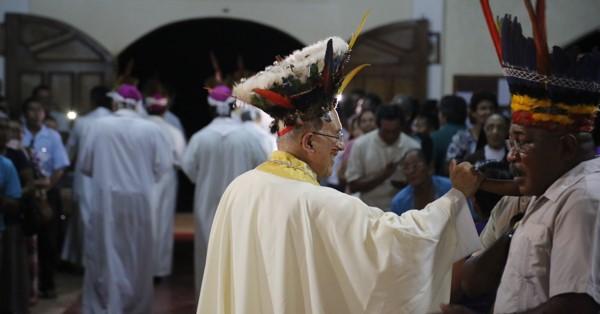 The Synod of Bishops for the Pan-Amazon Region in October 2019 will place the experience of the indigenous peoples of the Amazon at its centre. Michael Czerny SJ, Special Secretary to the Synod, explains why there is an urgent need for the Church to be present in the region with compassion and justice.

The Church is committed to modelling its presence in the Amazon on the example of the Good Samaritan: it seeks to act on the gospel commitment to compassion and justice. It must observe, understand, then reach out and act. This is the reason that Pope Francis convoked a Synod of Bishops for the Pan-Amazon Region. With the help of the Synod, it will be possible to introduce pastoral and environmental initiatives in the Amazon and thereby affirm the modes of being Church that such actions entail.

This readiness for commitment is usefully synthesised in the final chapter of the working document for the Synod, the Instrumentum Laboris (IL),[1] which sums up the challenges and hopes of a prophetic Church in the Amazon basin. The horizon against which this vision takes shape, without which there can be no justice and no life, is the fact that ‘everything is connected’, as Pope Francis explained in Laudato si’ (§138). The social and the natural cannot – and the environmental and the pastoral must not – be separated. Dangerous compartmentalisations – intellectual and spiritual, economic and political – have put human life in jeopardy on Earth, the common home of humanity.

The upcoming Synod is committed to helping heal the ruptures in a part of the world where the consequences of contemporary misconceptions and pernicious practices are particularly serious. It is time for the Church to grapple with this challenge. Hence the wording of the Synod theme, ‘New paths for the Church and for integral ecology’, and the title of the final chapter of the Instrumentum Laboris, ‘The prophetic role of the Church and integral human promotion’. Both speak about dimensions or dynamics that must go together in the Church’s mission: pastoral ministries, human promotion, integral ecology, new paths and prophetic roles.

Like Laudato si’ with its extensive historical, scientific, economic and pastoral exposition, the IL also provides a lengthy analysis of current conditions in the Amazon. In the words of Pope Francis: ‘Amazonia is being disputed on various fronts... There is neo-extractivism and the pressure being exerted by great business interests that want to lay hands on its petroleum, gas, wood, gold and forms of agro-industrial monocultivation’.[2] The IL adds:

The manifold destruction of human and environmental life, the diseases and pollution of rivers and lands, the felling and burning of trees, the massive loss of biodiversity, the disappearance of species (more than one million of the eight million animals and plants are at risk), constitute a brutal reality that challenges us all. Violence, chaos and corruption are rampant. The territory has become a space of discord and of extermination of peoples, cultures and generations (§23).

The conditions in the Amazon have various causes. Local and multinational interests support and encourage public or private investments at the cost of devastating impacts on the Amazon’s environment and its inhabitants. However, a key starting point is that indigenous peoples see their territories being threatened: they are undermined by interests that exploit them and are often denied the title to their own lands.

This is in contravention of international law and conventions.

The United Nations Declaration on the Rights of Indigenous Peoples (adopted on 13 September 2007), to which the pope has referred on several occasions, contains rights as important as the right to self-determination, by virtue of which indigenous peoples determine their political status and freely pursue their economic, social and cultural development (art. 3). In the exercise of their self-determination, indigenous peoples have the right to autonomy in matters relating to their internal and local affairs (art. 4). And article 6 of the 1989 Indigenous and Tribal Peoples Convention 169 of the International Labour Organization (ILO) concerning Indigenous and Tribal Peoples in Independent Countries gives rise to their right not to be affected by legislative or administrative measures which may affect them directly without first being consulted ‘in good faith and in a manner appropriate to the circumstances’ in order to obtain their free, prior and informed consent.[3]

The disparity of forces and, in many cases, the flagrant disrespect for constitutional rights, as well as the imposition of a so-called model of development, are continually causing great social upheavals in many indigenous communities: vulnerability, deteriorating relationships, migration, unemployment, violence and hunger. The lack of recognition, demarcation and title of the territories (a sine qua non for personal security, community stability and cultural survival) has led to an alarming number of martyrs in the Amazon. ‘To question power in the defense of territory and human rights is to risk one’s life, to step onto the path of cross and martyrdom.’ (IL §145)

The IL cites that 1,119 indigenous people were murdered between 2003 and 2017 for the broad reason that they were ‘defending their territory’.[4] In fact, these murders are sometimes attributed more specifically to drunkenness, domestic violence or local disputes. In general, though, they should be understood as consequences of environmental as well as social and structural deterioration, problems flowing from the lack of demarcation of indigenous territories and their invasion by powerful outside interests.

The Church in its pastoral role works closely with victims, and in its prophetic role opposes abuses. It is called to be ‘the advocate of justice and of the poor’, as Pope Benedict XVI reminded the bishops of Latin America and the Caribbean.[5] The Church’s presence is, in reality, ‘a prism through which one can identify the fragile points of the response of our States and societies as such to urgent situations and over which, independently of the Church, there are concrete and historical debts that we cannot avoid’.[6] By ‘seeing with a critical conscience’, as the Church does wherever it ministers, it observes ‘a series of behaviours and realities of the indigenous peoples that go against the Gospel.’ (IL §144)

How should the Church react? Papal writings since Pope Leo XIII’s Rerum Novarum in the 1890s, the documents of Vatican II and a continuously growing body of Catholic Social Teaching all provide clear guidance. In response to a dominant model of society that leads to exclusion and inequality, and an economic model that kills the most vulnerable and destroys our common home, the mission of the Church must include a prophetic commitment to the dignity of every human being without distinction, and to justice, peace and the integrity of creation.

As Pope Francis states so clearly, ‘I believe that the central issue is how to reconcile the right to development, both social and cultural, with the protection of the particular characteristics of indigenous peoples and their territories. [...] In this regard, the right to prior and informed consent should always prevail’.[7] Speaking to the indigenous people of the Amazon at Puerto Maldonado, he said: ‘I consider it essential to begin creating institutional expressions of respect, recognition and dialogue with the native peoples, acknowledging and recovering their native cultures, languages, traditions, rights and spirituality’.[8]

In the Amazon, the ‘good living’ (buen vivir) of the indigenous people depends on the just demarcation of their territories and on scrupulous respect for the same. Politics, in the words of Pope St John Paul II, ‘is the use of legitimate authority in order to attain the common good of society’.[9] The basic political task is to assure a just social order, and the Church ‘cannot and must not remain on the sidelines in the fight for justice.’ (Evangelii Gaudium §183, cf. Deus caritas est, §28) So the Church stands with indigenous people as they seek to care for their territory.

With all these great difficulties and dynamics, threats and promises in our minds and also in our prayer, let us recall the words of Pope Francis that serve to open this final chapter of the IL. ‘From the heart of the Gospel we see the profound connection between evangelization and human advancement, which must necessarily find expression and develop in every work of evangelization.’ (Evangelii Gaudium §178)

Michael Czerny SJ, Under-Secretary to the Vatican’s Section on Migrants and Refugees, is serving as Special Secretary to the Synod of Bishops for the Amazon in Rome in October 2019.

This article first appeared in Italian in L’Osservatore Romano on 1 August 2019.

[1] Working Document for the Synod of Bishops for the Pan-Amazon Region: http://www.sinodoamazonico.va/content/sinodoamazonico/en/documents/pan-amazon-synod--the-working-document-for-the-synod-of-bishops.html

[5] Address of Pope Benedict XVI to the Inaugural Session of the Fifth General Conference of the Bishops of Latin America and the Caribbean (13 May 2007): http://w2.vatican.va/content/benedict-xvi/en/speeches/2007/may/documents/hf_ben-xvi_spe_20070513_conference-aparecida.html

[8] Pope Francis, Meeting with Indigenous People of the Amazon.