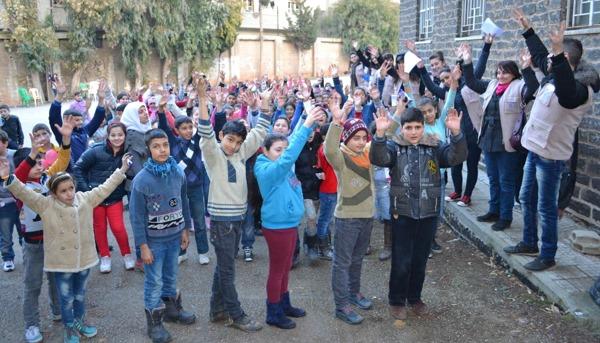 Headlines broadcasting the latest developments in Syria are now a daily occurrence, but how well do they convey the reality of life for the Syrian people at the moment?  Earlier this summer, Frances Murphy heard Fr Ziad Hilal SJ in conversation about the ‘crisis of humanity’ through which the Syrian people are living. Fr Ziad shared his personal experience of life in Homs and described the work of the Jesuit Refugee Service in Syria.

‘The media often give a bad image of the Syrian people, but it’s not true,’ Syrian Jesuit Fr Ziad Hilal told a crowded hall at Farm Street Church in July. ‘In Syria there are good people and civil society is very strong.’ It’s a point he comes back to repeatedly over the course of the one and a half hours he spends in conversation about the current situation in Syria and the work of the Jesuit Refugee Service (JRS) in the country.

He provides plenty of evidence of this goodness and strength as he talks about the JRS-run and volunteer-staffed centres in Homs which now provide education to more than 3,000 of the city’s children – Muslim and Christian. One such centre, the Al-Moukhales Centre for Social and Psychological Support, was established in 2012 and in addition to its educational work, it provides medicine, hygiene packages and physiotherapy to the city’s most vulnerable people and distributes an incredible 1,700 meals each day in the Old City, an area in desperate need.

The Old City was seized by opposition forces in 2012, by which time Fr Ziad had already been working with JRS in Syria for three years – after joining the Society of Jesus in 1995 he left his home country to undertake studies in philosophy, theology and education before returning in 2009. The focus of JRS’s work in Syria when Fr Ziad first joined them was helping the Iraqi refugees who had fled into their neighbouring country during the sectarian conflict in the south of Iraq in 2006/7 – and many of them are still in Syria, along with Palestinian refugees. When Syria’s internal conflict began in 2011, much of JRS’s work was redirected to assist internally displaced persons in Syria.

A key figure in this work was Fr Ziad’s brother Jesuit, Fr Frans van der Lugt, a Dutchman whose commitment to the Syrian people led him to remain in the Jesuit church in the Old City even when that area was under siege. He was a mere 900m from another of the Society’s churches in Homs, where Fr Ziad lives, yet the two men could not see each other for two years. And it was in his residence that Fr Frans was shot and killed in April 2014. He had been urged several times by his fellow Jesuits to leave Homs, but his response was always the same, as Fr Ziad recalls: ‘No, my place is here. I came to Syria to help the Syrian people not only at the best time but also in the worst time.’ The place where he was killed is now something of a holy garden, where people from all over the country began coming to pray within two days of his death.

Fr Frans is not the only priest to have paid a high price for his courage in the face of the crisis in Syria. Italian Jesuit Fr Paolo Dall’Oglio was kidnapped in March 2013 and no official information has been received about him since. The same is true of two bishops and two Syrian priests who were also kidnapped two years ago. And Fr Jacques Mourad, a Syriac Catholic priest, was kidnapped from his residence in May this year, having chosen to stay with the local community rather than flee the imminent arrival of Islamic State.

Making such stories known is important, says Fr Ziad, ‘because in Syria there are not only bad people, but also holy people. There are maybe a thousand people like Fr Frans. They are living with the people, helping the people and seeking peace and reconciliation in Syria.’ He is keen to stress his gratitude to organisations such as JRS, Aid to the Church in Need, L’Oeuvre d’Orient and Pax Christi, who have been helping the Syrian people since the beginning of the conflict in the absence of any systematic support from the international community. Fr Ziad is, in his own words, ‘not a political man’, and so he offers no political analysis of the conflict in Syria or the international response to it. But he is happy to talk about the reality of the situation as he sees it, and in doing so he clears up a lot of misconceptions and raises numerous questions.

Half of Syria is now in the hands of Islamic State and recent figures from UNICEF list 12.2 million of the country’s inhabitants as ‘in need’. Fr Ziad speaks of approximately 2 million Syrian refugees in Lebanon; 1 million each in Turkey and in Jordan; and more elsewhere in Europe, the USA and Canada, with more leaving and estimates changing every day. ‘In the beginning [of the conflict], a lot of Syrian people said, “we will stay here, it is our land, it is our culture, our civilisation”, but they are tired, exhausted after these four years and now where is the hope for them? I was in Homs when Islamic State took Palmyra, and now it is very difficult. We lose our houses. We lose our work. But now we are losing our civilisation, our culture and it is very hard for us.’

‘The international community, in my opinion, aren’t doing a lot. They don’t have a plan for Syria... Why are governments across the world doing nothing to stop jihadists entering Iraq and Syria through Turkey?’ He attributes a lot of this perceived neglect to a media misdiagnosis of the cause of the Syrian crisis as a problem between Christians and Muslims. ‘The problem is about fundamentalist thinking, not about Christians or Muslims,’ he says repeatedly, and Muslims suffer as much as Christians at the hands of Islamic State. ‘Where Islamic State enter, they kill not only the Christian people but also the Muslim people – all the people who don’t want to collaborate with them. This is the truth. When they entered into Palmyra, they killed the people who don’t want to collaborate with them – Christians and Muslims.’

The result of this is that ‘the problem in Syria is not just one for Christians or Muslims; it is one for humanity. It is very important today to tell the international community that the best way to help Syria, to have peace, is not only to think about [helping] the Christian people to leave Syria. If we have peace the Christians will stay, all Syrians will stay.‘ As for those Christians that leave, Fr Ziad worries that international support for them is not as strong as they might hope. Those Christians who flee Syria for Europe, including several from Fr Ziad’s own parish, are not readily helped by their fellow Christians – ‘nobody in Europe thinks like that.’

The painting of the crisis in some parts of the media, then, as a religious conflict is not only inaccurate – ‘Believe me, a lot of Muslim people support the Christian people and the Christian people support the Muslim people’ – but it feeds the agenda of those who wish to shirk any kind of responsibility for the welfare of the Syrian people by distancing themselves from their situation. But Fr Ziad has a word of warning – albeit a softly-spoken one – for anyone who would treat events in Syria this way. He describes the plot of the 2009 film The Box, in which a family find themselves presented with a box containing a single button. If the button is pressed they will win $1 million immediately, but elsewhere in the world one person about whom they know nothing will be killed. They wrestle with the decision and end up pushing the button...but what they don’t reckon with is when the box might be moved to somewhere else in the world, placing their own lives at the mercy of a decision of someone unknown to them. ‘This is the story,’ says Fr Ziad. ‘It is not only the Syrian story, it is the world story. A lot of people abroad now are putting their finger in the box because they need their commercial [enterprises] – they need their arms to be sold, their money to be circulated, etc. This is the problem, a problem for our world today.’

That the Syrian people sense an indifference to their struggles on the international political scene is no surprise given that insufficient help has been forthcoming to allow them to meet the rising cost of food, or to provide fuel to help the country’s population survive the exceptionally cold winter just passed. But it is organisations such as JRS that provide a counterbalance to this. In addition to the afore-mentioned support for the people of Homs, they help even more people in other of Syria’s big cities – approximately 13,000 families in Aleppo and 9,000 in Damascus. Support from JRS and other humanitarian organisations means that, ‘Although we speak about a lot of things destroyed in Homs, life in Homs hasn’t stopped. We have schools, we have work – not for all the people, but most of the people go to school, university, work every day.’

JRS’s mission is to continue helping those who are most in need in a polarised environment, drawing on the strength of civil of society to help them do so. People come together from different sectarian origins, and economic and social backgrounds, crossing the line of fire to help people in need, and this bringing people together is in itself a fundamental dimension of JRS’s humanitarian work in Syria. ‘Through that experience, helping people in need, we believe that we are able to plant the seeds of future reconciliation,’ says Andrea Lari, International Development Officer for JRS. ‘People are sick and tired and desperate of the violence, of the war. This is enough. We should push all that have the capacity to influence those that are supporting the fighting forces, at different levels.’ The voices of the victims of the conflict, says Lari, need to be heard.

Fr Ziad says that the aim of JRS’s work with young people in Syria is ‘to grow up a generation for peace, not a generation for war’. This moving mission statement speaks at the same time to the sad reality that the conflict in Syria has infused the mentality of a whole generation, and to the dedication of those who refuse to settle for anything other than peace. Testimonies, such as his, of those who see Syria with their own eyes, rather than through a media lens which seems to filter out the truth – both good and bad – should be shared and act as a wake-up call to all of us who think that this isn’t our problem. As Fr Ziad says: ‘It is big crisis of humanity.’

Find out more about the work of the Jesuit Refugee Service:

Living in a time out of shape