Skip to main content
Photo by Number 10 at flickr.com 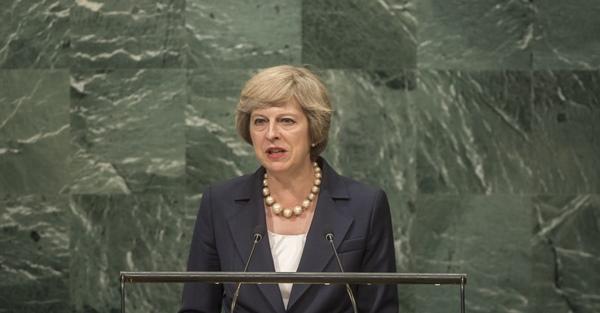 Theresa May delivered her first speech to a Conservative Party Conference as Prime Minister of the United Kingdom at the beginning of this month. Joe Egerton argues that her message should be seen in the context of a centuries-long struggle to bring justice to those who are neither rich nor powerful, a struggle in which the sixteenth century Jesuit Robert Parsons played a leading role.

Theresa May’s speech to the Conservative Party Conference in Birmingham[1] can be seen as initiating the latest campaign in a conflict that has been raging across the United Kingdom for centuries. The underlying malaise to which she has drawn attention and that she seeks to address has not changed from the condition that the Jesuit Robert Parsons set out to alleviate in the sixteenth century – half the nation enjoys immense prosperity at the expense of the other half.

Towards the end of her speech, the Prime Minister spoke of walking out of her office and passing the portraits of her predecessors. She singled out some who had changed this country for the better. The first she named was Benjamin Disraeli, ‘who saw division and worked to heal it.’ This is an unmistakeable reference to his novel, Sybil, or The Two Nations.[2]

Disraeli’s central beliefs are articulated in a dialogue set in the ruins of Fountains Abbey in Book 2 of Sybil. Disraeli’s description of society – and diagnosis of its ills – is one that resonates through the Prime Minister’s speech, and is explicitly Christian:

‘It is a community of purpose that constitutes society,... without that, men may be drawn into contiguity, but they still continue virtually isolated…. men are brought together by the desire of gain. They are not in a state of co-operation, but of isolation, as to the making of fortunes; and for all the rest they are careless of neighbours. Christianity teaches us to love our neighbour as ourself; modern society acknowledges no neighbour.’

Disraeli held that the dissolution of the monasteries, and the re-allocation of the abbey lands that had funded the monastic welfare state to what was to become a new aristocracy, tore England in two. This echoes the analysis of Robert Parsons in his Memorial on the Perfect Reformation of England[3], and we have good reason to think that Disraeli was indebted to Parsons in making his argument.

The influence of Robert Parsons

Disraeli’s father, Isaac, was a significant scholar of the religious disputes in the reigns of James I and Charles I, and possessed one of the greatest private libraries. That library would certainly have contained copies of both Parsons’ Conference on The Next Succession and the Memorial, and Benjamin read voraciously in that library. The Society of Jesus and its founder are held in remarkable respect in Disraeli’s novels, especially Coningsby, which contains a semi-autobiographical passage in which a Jesuit makes an appearance as a tutor whose career resembles Parsons’ own. The Jesuit is named Rebello – and Parsons was branded a rebel by Elizabeth I and James I. Consider also that Disraeli was the leader of a group called Young England, a group that included Catholics who we know held Parsons’ works in high regard. We have good reason, then, to believe that the similarity in views between Robert Parsons and Benjamin Disraeli – on the welfare of the people, the centrality of Parliament, the legacy of Thomas Cromwell and Henry VIII and the importance of the Church as a deliverer of welfare[4] – are not a coincidence but a result of Disraeli’s reading of Parsons.

A preference for the poor

Underlying the analysis shared by Parsons and Disraeli, and by Theresa May in her Birmingham speech, is the gospel message of a preference for the poor. Reading St Luke, St James or the prophet Amos, we tremble at the warnings that the privileged who exploit the poor are destined to hellfire. The vicar’s daughter may not have threatened anyone with eternal damnation but there was not much comfort for the rich in this:

People with assets have got richer. People without them have suffered… A change has got to come. And we are going to deliver it.

Although there was a very sharp passage on tycoons who exploit services paid for from taxes but pay none themselves, nothing quite matches this assault on the denial of the best education to the less well off:

If you’re rich or well off, you can have a selective education for your child. You can send them to a selective private school. You can move to a better catchment area or afford to send them long distances to get the education you want. But if you’re not, you can’t. I can think of no better illustration of … why ordinary working class people think it’s one rule for them, and another for everyone else. Because the message we are sending them is this: we will not allow their children to have the same opportunities that wealthier children enjoy. That is a scandal and we – the Conservative Party – must bring it to an end.

The Prime Minister in Birmingham addressed the same problems that Robert Parsons addressed: a nation where the prosperity of one half means the misery of the other half; where the poor are denied access to the opportunities that come from an excellent education[5]; where there is a desperate need to provide practical help for those in need.

The Prime Minister has confronted her party and the nation with a very uncomfortable truth. It is little surprise that the applause was less than that won by Margaret Thatcher in her day. It is unsurprising that concerns are being expressed in some quarters, as is doubt about how much can be achieved.

Disraeli eventually formed a majority government in 1874. It enacted more social legislation than any other administration in the nineteenth century. This is how, in Sybil, written thirty years before he became Prime Minister, he described England at the coronation of Queen Victoria:

‘This is a new reign,’ said Egremont, ‘perhaps it is a new era.’

‘I think so,’ said the younger stranger.

‘Well, … say what you like, our Queen reigns over the greatest nation that ever existed.’

‘Which nation?’ asked the younger stranger, ‘for she reigns over two.’

The stranger paused; Egremont was silent, but looked inquiringly.

‘Yes,’ resumed the younger stranger after a moment's interval. ‘Two nations; between whom there is no intercourse and no sympathy; who are as ignorant of each other's habits, thoughts, and feelings, as if they were dwellers in different zones, or inhabitants of different planets; who are formed by a different breeding, are fed by a different food, are ordered by different manners, and are not governed by the same laws.’

‘You speak of... ‘ said Egremont, hesitatingly.

‘THE RICH AND THE POOR.’

At the start of her premiership, Theresa May has openly recognised the problem that Parsons and Disraeli addressed. The Rich and the Poor are two nations. Theresa May has said she means to change this. We should all hope and pray that she succeeds.

Joe Egerton is a former Conservative candidate and attended the Birmingham conference. He is currently standing in a primary election to choose a Conservative county council candidate for the centre of Canterbury.

[2] Published in 1845, the middle novel of a trilogy exploring the state of Victorian England.

[3] Disraeli’s complaint against Thomas Cromwell’s dissolution was that it had both destroyed the institutions that provided education and welfare (care for the sick and support for the destitute) and plundered the wealth that the monasteries held in trust for the people. Parsons certainly made these complaints but he also denounced the change in religion – ‘the monstrous heresy and rapinage of Henry VIII.’ Nobody believed then or believes now that the monastic system could have been left untouched to meet the challenges of the 16th century. That supremely competent administrator, Cardinal Wolsey, himself a serious reformer, suppressed smaller, failing monasteries to found colleges; the protestant Queen Anne Boleyn was willing to destroy the monastic institution for religious reasons but demanded that the wealth released all be used for charitable purposes – thus falling out with Cromwell who was determined to use the wealth of the monasteries to enrich a new class of royal servants who became in time a new aristocracy.

[4] In an essay known as the General Preface written in 1870, Disraeli explained that he and his Young England associates had in the 1840s hoped that the Church would take on the task of social reform and the alleviation of poverty, but that after 1845 the loss of key men to Rome had made this hope vain. It is clear from both Endymion and Lothair that the man Disraeli thought (in 1845) might lead the charge was the then Archdeacon of Chichester, the indomitable Cardinal Manning. When Disraeli formed a majority government in 1874, his Home Secretary, Richard Cross worked closely with the Radical Liberal Mayor of Birmingham, Joseph Chamberlain, to pass legislation enabling councils to take on the role that Parsons and Disraeli had earlier hoped that properly financed dioceses could do. Theresa May admires institution builders: she has named both Chamberlain and Attlee (for creating the NHS) as political heroes.

[5] When in the reign of Henry VIII cathedral foundations replaced the schools of monasteries that had served the cathedrals, preference was given to the ‘sons of gentlemen’ and the sons of artisans and labourers were only allocated places that were not claimed by the sons of the well-to-do. Cardinal Pole, as Archbishop of Canterbury, changed this rule for the King’s School in Canterbury and used his legatine powers to order all cathedral foundations to follow suit. Parsons was no great admirer of Pole but his call for a grammar school in every town was designed to provide for all.

Conservatives and the Common Good

Put to the test