Skip to main content
Photo by Catholic Church England and Wales at flickr.com 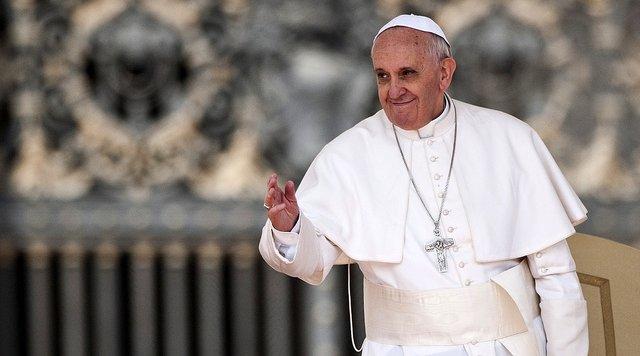 Ahead of Pope Francis’ visit to the Holy Land from 24-26 May, the Jesuit priest who is responsible for Hebrew-speaking Catholics in Israel shares his hopes for the visit.  ‘Words create worlds, and we need new and creative words from the Holy Father to break out of the prisons of ideology, violence, war and hatred that the words we use today have created,’ says David Neuhaus SJ. (Interview by Victor Edwin SJ).

Victor Edwin SJ: What do you expect Pope Francis’ visit to Israel, Jordan and the Palestinian territories to achieve in terms of peace in the Middle East?

David Neuhaus SJ: The pope is primarily coming to commemorate the historic embrace of Pope Paul VI with Orthodox Patriarch Athenagoras of Constantinople in 1964 in Jerusalem, putting an end to centuries of bitterness and enmity. Pope Francis will embrace Patriarch Bartholomew [the current Orthodox Patriarch] here in Jerusalem, sending a message to the Christian world that our divisions are a source of scandal and render our witness inauthentic. He will meet with the political authorities in Jordan, Palestine and Israel, and of course stress the importance of justice, peace, pardon and reconciliation, and surely address the instability throughout the Middle East. By putting evangelical words on our situation and speaking from his heart, as he does so well, I am sure he will help us see more clearly what we need to do to promote peace.

VE: What impact will the pope’s visit have on Christian-Muslim relations in the Middle East?

DN:  Pope Francis will be visiting two countries that are predominantly Muslim - Jordan and Palestine; and in Jerusalem he will surely visit the Haram al-Sharif, the principal Muslim shrine, as did his predecessors on their visits in 2000 and 2009. The pope’s addresses to the Muslims he meets will certainly again express the teachings of Vatican II, the values we - as Christians and Muslims - share, the common struggle to make a better world, and the necessity of teaching mutual respect.

VE: Half a century ago, Pope Paul VI made a visit to Jerusalem. He had an historic meeting with Ecumenical Patriarch Athenagoras, the spiritual leader of Orthodox Christians. That meeting was considered to be an important milestone in ecumenical relations.  Pope Francis is expected to meet the present Orthodox Patriarch Bartholomew at the Church of Holy Sepulchre in Jerusalem. How will this ‘togetherness’ of Pope Francis and Patriarch Bartholomew promote ecumenical relations in the Middle East?

DN: This meeting is at the centre of the pope’s pilgrimage. It was proposed to the pope by Patriarch Bartholomew on the day after the inauguration of his papacy. Christian unity is essential to the well-being of Christians in the Middle East, who are a minority and are becoming increasingly fragile through the ongoing instability. We hope that this embrace, not only with Patriarch Bartholomew but with Patriarch Theophilos III of Jerusalem and all the other Church leaders, will be a sign that the centuries of division are drawing to a close and a new age of Christian unity and solidarity begins.

VE: What is the impact of this meeting on the relations between the Catholic Church and the Russian Orthodox Church, another important and influential Church?

VE: How could the pope’s visit promote relations between Jews and Christians?

DN: Pope Francis has a very close relationship with Jews, going back to his days as archbishop in Buenos Aires. Jews are following this pope closely: they are impressed by his directness, his engagement with others and the clarity of his call for dialogue. The visit will give another opportunity to show the Jews that the Church is absolutely intent on reconciliation, dialogue and cooperation to mend a broken world.

VE: Pope Francis has described his visit as a ‘pilgrimage of prayer in the footsteps of Jesus Christ’.  How do you, a Jesuit involved in interfaith, intercultural and ecumenical relations, view this ‘pilgrimage’?

DN: As a Jesuit, I will be especially interested in the way the pope speaks, presents his thoughts and helps us think beyond where we are. Popes Paul VI, John Paul II and especially Benedict XVI helped us clarify our own thinking as Christians, how we are to conceive of our identity and mission. Words create worlds, and we need new and creative words from the Holy Father to break out of the prisons of ideology, violence, war and hatred that the words we use today have created. This is true in our interreligious relations as well as in the intercultural, ethnic and national spheres.

VE: Often the relation between the Vatican and Israel is described as icy. Will this visit ‘defrost’, to some extent, the chilly relations?

DN: There are three central issues in Vatican-Israel relations that sometimes create problems:

1.    The negotiations on the status of the Church that have been dragging on since 1994. We are hoping that we are reaching an end to this exhausting saga and that the visit of the Holy Father will illustrate that the Church is an integral part of what the Holy Land is.

2.    The situation of Christians in the State of Israel. Although Christians enjoy a large degree of religious freedom - freedom of worship and freedom to run their own churches, schools and institutions - there is also a rather widespread anti-Christian sentiment based upon Jewish religious prejudice and historical memories of persecution of Jews by Christians. More importantly, there is discrimination against non-Jews, particularly Arabs, in the State of Israel, and many Christians suffer from this. We hope that the pope’s visit will create a greater awareness that this discrimination must be fought.

3.    The lack of peace between Israel on the one hand, and Palestine and the rest of the Arab world on the other, creates a situation in which the Church is sometimes critical of one side or the other in a continuing situation of violence. We hope the pope will open up minds and hearts with his message of peace.

VE: Recently, the EU envoy to Israel, Lars Faaborg-Anderson, warned that Israel’s rapid settlement expansion plan would destroy hopes for peace. How does the Vatican’s renewed effort for peace in the Middle East address some of these complex questions?

DN: The Holy See has maintained a discourse of sanity in the ongoing war that is the backdrop to the occupation of Palestinian lands and the continuing colonisation through settlement building. The Holy See has consistently called for negotiations, respect for the rights of each party and the end to violence. The Holy See, as a voice of morality and integrity, has an essential role in keeping alive the voice of sanity in the name of an express love for Israelis and Palestinians, Jews and Muslims... The Church is also aware that only justice and peace will ensure the wellbeing of the Christians in Israel/Palestine and throughout the Middle East.

VE: What is the mission of the Jesuits in the Land of Abrahamic Religions? What are the real possibilities for the Children of Abraham - Jews, Christians and Muslims - to live in peace?

DN: Our primary mission is to live with and in service of the local Church. In fact, Jesuits here are involved in both the Palestinian Arabic-speaking Church and the Hebrew-speaking Church in Israel. Our role is to help form those who will lead, and so we teach in the Catholic University in Bethlehem and in the diocesan seminary; we are involved in the formation of the religious and giving retreats. We, too, must participate in the search for a language that adequately describes our reality from the point of view of the gospel and Church teaching, and breaks with the language that is predominant, a language of contempt and enmity. As Jesuits, we are engaged not only with Christians but are also deeply engaged in general society both with Muslims and Jews.

DN: We need to make sure that it does. Unfortunately, the initiatives of the educated elites and the civil authorities do not get down to the grass roots level. Although relations between Muslims and Christians are good on the day-to-day level, the increasingly militant language of radical Islam, with its black and white categories, is more successful with a large number of people, with disastrous results.

VE: In what ways do you think that Indian Jesuits could partner with the Jesuits in the Middle East for the mission of the Society of Jesus?

Fr David M. Neuhaus SJ serves as Latin Patriarchal Vicar within the Latin Patriarchate of Jerusalem. He is responsible for Hebrew-speaking Catholics in Israel as well as the Catholic migrant populations. He teaches Holy Scripture at the Latin Patriarchate Seminary and at the Salesian Theological Institute in Jerusalem and also lectures at Yad Ben Zvi. He spoke to Victor Edwin SJ for Jivan, the magazine of the Jesuits in India.

The religious landscape in Sweden

A time to dream

The Church becoming synodal, part 2: The preferential option for the poor and the way forward