Skip to main content
Photo by US Papal Visit at flickr.com 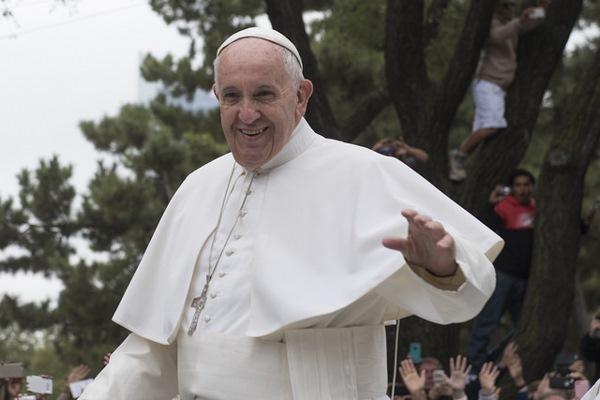 When Pope John Paul II visited Chile in 1987 he was welcomed as a ‘messenger of life, pilgrim of peace’ – Nathan Stone SJ remembers it well. How did Pope Francis live up to these same accolades on his visit to Cuba and the United States?

I was there in April 1987 when Pope John Paul II visited Chile. It was quite the affair. Chile was small, far away and off the beaten track. Whenever an international figure of any stature came to town, it was a big deal, but John Paul was the Vicar of Christ. The whole country came to a standstill. City buses actually halted their service. The characteristic Santiago smog miraculously disappeared, and people walked everywhere for a few days. It was our papal pilgrimage. Whan that Aprill with his shoures soote… We have rather medieval tastes, when it comes to religion. April is early autumn in the southern cone, bright sunny days with hope of rain on the way. We love a long walk, especially if there are tales to tell.

The local Church had some input into the Holy Father’s speeches so that they would ring true in context. John Paul’s Spanish was relatively good and he had that charismatic baritone, trained in the theatre. There were memorable lines: ‘Love is stronger.’ That comes from Saint Paul’s Letter to the Romans, of course, where it says that love is stronger than death, understood in context as a censure of the culture of death promoted by the Pinochet regime.

John Paul also said, ‘the poor can’t wait’. Immediate attention to the needy was a priority in the Church’s social teaching. The poor had no resources with which to weather a bad spell. The implication was that the wealth-first, trickle-down economic programme, the original motivation of the military coup, had left something to be desired.

The local Church also wrote a papal hymn. Everyone learned it by heart and sang it to the pope everywhere he went. He loved it. He remembered it for decades and he would sing a few bars for Chilean visitors forever after. ¡Mensajero de la vida, peregrino de la paz![1]

There were a couple of tense moments. Water cannons doused protesters at the outdoor Mass in Parque O’Higgins.[2] And, at the National Stadium, the Holy Father exhorted the nation’s youth to renounce the idols of money, power and greed, to which a crowd of 90,000 assented with a rousing cheer. The last item on that list, after the impressive dramatic build-up, was, ‘Do you renounce the idols of sex?’, to which the crowd’s response was a disconcerting, unanimous silence; then a playful, ‘No!’ The faux pas was blamed on the clandestine communist youth league who had faked 20,000 tickets for the event, but there aren’t that many groups of Latin American youth who will categorically renounce sex on the spur of the moment like that, even if they are good, practising Catholics. It was a cultural mishap.

There was some concern among local Catholics (still a majority, back then) that the papal visit would be utilised by the regime as tacit Vatican approval of more than a decade of torture, disappearance and arbitrary execution, the dictatorial repertoire for saving the homeland from an already waning threat of communist world takeover. Protocol required that a meeting between heads of state be arranged at the Presidential Palace. The pope was advised not to step out on a certain balcony with the Presidential Usurper because it would create an embarrassing photo opportunity. It was the place where democratically elected presidents had traditionally received visiting nobility in order to present them to the cheering masses.

Pinochet had never had a meeting with such a high profile figure. Even his attempt to visit Ferdinand Marcos in the Philippines had been thwarted. He was an international pariah, and the Holy Father stepped out on the balcony with him. That photo is still around, long after the catchy papal hymn has been forgotten.

That legacy is perhaps one of the reasons why some Americans have been shocked and dismayed to discover, on the occasion of the recent papal visit to the United States, that this pope was not a paid-up member of the Republican Party. Pope Francis has insisted that he is not a leftist, that he speaks for the Church in upholding official teaching and, whenever possible, advocating Christian compassion in public policy. This is what makes climate change, immigration reform and the scandal of homelessness high priorities on the papal agenda.

But, in spite of Pope Francis’ 70 per cent approval rating before the visit, his priorities are not necessarily high on the agenda of many of the American faithful. A large number of the people to whom the Church now finds herself catering are a wealthy, powerful and, strangely, puritanical brand of Catholic. Finding common ground with evangelicals, for instance, used to be a problem. The papacy itself was contentious. In the weeks before the Kennedy assassination in 1963, the Pastor of the First Baptist Church in Dallas made a point of reminding his congregation every Sunday that a man who obeyed the pope was unfit to be President of the United States. Now, after decades of globalised conservative ideology, the issue seems to have vaporised.  Evangelical Protestants and third generation Catholics are voting as a bloc in the USA.[3]

Some American Catholics were scandalised that Pope Francis publicly shook hands with President Obama – not because the American President is responsible for the Guantanamo prison, for secret renditions and drone strikes, but because of his effort to provide universal public health services, known as ‘ObamaCare’. The grand moral polemic that has been fabricated, tabloid-style, over health services offering birth control[4], is just a distractor from more fundamental debates about the common good, and how that should be funded.

Then, Pope Francis went off to speak before both houses of Congress. It was a monumental opportunity to make a call for justice, peace and reform. In heavily accented English, he called for a more charitable America. It was edgy, and powerful.

Pope Francis comes from a contemplative school of Catholic Christianity in which one makes every effort to adopt the Lord’s criteria as his or her own. The Gospel was intended to be contemplated and internalised so that all disciples could come to identify with Christ and respond as he would do in every situation, thus advancing the cause of the Kingdom of God on earth. Pope Francis has taken this seriously.

His predecessors were perhaps more vocal about the finer points of metaphysics and intrinsic moral value. Those play out in the internal forum. But the Gospel says, ‘Blessed are the peacemakers’. That means getting off the plane in Havana and risking angering more than a million Cuban-Americans. It also changes the electoral panorama in Florida, a swing state in American Presidential elections.[5]

During most of his visit, the Holy Father spoke in Spanish because his English is not very good. It was perceived as a gesture of solidarity with Hispanics, who are America’s fastest growing minority but by no means a homogenous group. Chicanos are Mexican-Americans: US citizens with good educations, English skills and passports. They don’t like being confused with undocumented immigrants. Puerto Ricans live in New York. They have a special legal status because Puerto Rico is a US possession. Cuban Americans tend to be the wealthy who fled Fidel’s revolution in 1959. They have legal status and they vote consistently Republican, because Republicans talk tough on communism.

Then there are undocumented immigrants who don’t vote. They hang together and create local subcultures: culinary, linguistic and religious. There was once a sense of shame for how the Irish and the central Europeans were processed on Ellis Island in the shadow of Lady Liberty, but their modern-day equivalents process themselves, on foot, through the deserts of west Texas and Arizona and a large section of American society wants them all to go home and wait in line for their visas. Only about 60,000 visas for unskilled labour are available each year. That means the wait in line can last about three lifetimes

And now, we have a Latin American Pope. Argentines speak with a flair that American Hispanics find colourful. The Argentine Church has always been theologically and pastorally conservative. We are discovering that that can also mean radically Catholic in a good way.

The key to understanding Pope Francis is not trying to figure out whose side he’s on. His is the inspiration behind the Second Vatican Council. Over the centuries, we had trapped ourselves in a labyrinth of rigid structures and fears. In 1963, departure from the Church’s tradition wasn’t on the agenda. The objective was a return to our origins, to rediscover the charisma of the early Church which birthed a Eucharistic faith in the constant presence of the Risen Christ, our guiding light.

A good shepherd doesn’t follow his sheep. He leads them. Jesus always had a lot to say. The crowds loved him, but the authorities sent him to Calvary for rabble rousing. That’s how it is, sometimes. God bless Pope Francis. May he shake us out of our spiritual lethargy, and get us back on track as disciples and missionaries of good news for the homeless, the prisoners, the immigrants and the refugees.

Nathan Stone is Jesuit priest, American by birth and Chilean by adoption. He studied theology at the Pontifical Catholic University in Santiago, and Literature at the University of Texas in Austin.

[1] ‘Messenger of life, pilgrim of peace’

[2] The father of the nation was Bernardo O’Higgins, and yes, he was Irish.

[4] A bigger issue will certainly be abortion on demand. Catholics consider this is not health care because pregnancy is not an illness. Republicans have made this a huge campaign issue for the last thirty years, and not one has introduced legislation that would revoke legal abortion, or facilitate avoiding it. (There is still no provision for paid maternity leave in the USA.)

[5] We remember that a court battle over the recount in Florida put Bush Jr in the White House in 2000.

iWitness: ‘Our Pope’: What John Paul II means to Poles

A time of choosing: Conversion and discernment in the mind of Pope Francis

St Henry Morse SJ: ‘A saviour of life unto life’
Alfred Delp: committed to Christ
‘The Fight Between Carnival and Lent’
‘Give them something to eat’: The Christian approach to food aid
Ignatius and the Stars