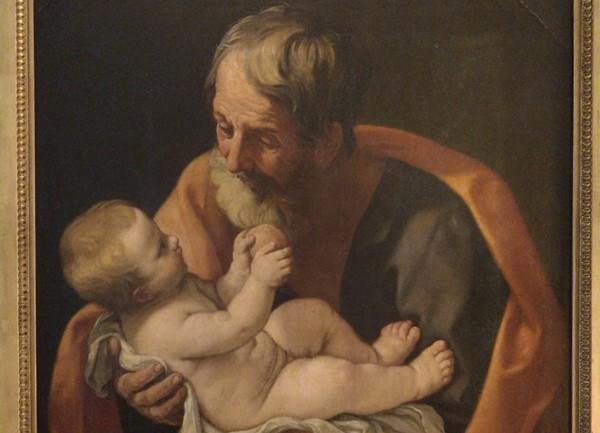 ‘Saint Joseph reminds us that those who appear hidden or in the shadows can play an incomparable role in the history of salvation,’ wrote Pope Francis recently, reflecting on the figure of Joseph in the light of the efforts of so many people during the Covid-19 pandemic. James Hanvey SJ finds Joseph stepping out of those shadows and inviting us into the light of the Christ child in a 17th century painting.

We need only ask Saint Joseph for the grace of graces: our conversion.[i]

What happens when generations meet? At the visitation, it is Elizabeth who recognises Mary’s uniqueness and allows her to speak out her prophetic joy in the Magnificat. Luke allows us to hear both women. Each is filled with the Holy Spirit, and their witness reaches across texts and times to bring us into their company and make us part of their community of faith. With Elizabeth, Mary knows she is not alone. Together, each generation provides the ground for the other and gives faith its continuity and strength. But what of Joseph? Somehow, he always seems to be in the background. Yet, for Matthew he is necessary. It is Joseph who provides a home, a protected place in the community in which Christ can be a child and grow; grace can mature. Like every Jewish father, it is he who will present the Christ child at his circumcision and in the religious rituals that mark his passage into adulthood. He, too, is that ‘just’ man who stands, like Mary, in the great tradition of God’s faithful.

In Guido Reni’s portrait, Joseph steps out of the shadows and comes into the light. An Italian painter of the Baroque period, Reni does not have many works. He seems to prefer to repeat themes with slight adjustments. He is not only a master at capturing a moment, he captures an effect. In ‘Saint Joseph and the Christ Child’, we can see his art at its height.

Joseph holds the Christ child in his arms, supporting the length of the body with his hands. The touch is not only strong but gentle. The father and the child are held in each other’s gaze, light from the baby illuminating the face of Joseph whose love absorbs it and reflects it back. There is certainly adoration here, but Reni also communicates a mutuality. When Joseph gazes at the infant Jesus, adoration is quietly lost in a tender love. Isn’t it the look of every adoring father, completely wrapped in the miracle of life that has been entrusted to him? He is delighting in the child who, relaxed, radiates happiness and a playful contentment, secure within the protecting circle of Joseph’s embrace.

Like every baby with a new object, the child holds up the apple in a gesture that is presenting it for our observation – the child is not looking at it for he, too, remains totally absorbed in Joseph. Although the apple is a clear symbol that the Fall is now something of the past, in the hands of this infant Christ, it is presented to us as the promise of redemption. Reni achieves this symbolic change in a subtle way: he manages to make it a natural object of playfulness – there is sense of curiosity, not one that will ultimately lead to deception, but the promise of a new innocence.

In the same way, the chubbiness of the baby only serves to emphasise the very reality, the physicality, the human flesh of Jesus. Again, it is a very natural picture of any healthy and alert baby. But Reni wants us not only to know that the incarnation is real, he wants us, too, to touch it, to feel the weight of the child. This is no symbolic or docetic representation of a god disguised as an attractive child to claim our affection and devotion. Such gods never grow into adults, nor will they ruin the effect by being placed on a cross. But the Christ child that Joseph cradles in his arms is a very recognisable, well-nourished, lively baby. Joseph becomes our guide to the truth for we know he will not be deceived nor will he wish to deceive us. Without a word, but in his holding of him, the absorbed, attentive, searching gaze upon the child’s face, we know that he would soon expose an illusion. In Joseph’s arms this child is real, he is human; his flesh is our flesh. In the gesture, too, there is another truth which Joseph keeps for us. As we see and feel the reality of the baby in Joseph’s arms, we can also feel the child’s life and energy. This is not a sleeping infant, but one that is alert and reaching out, eager to touch the world. The way in which Reni angles Joseph’s holding of the Christ-child suggests that he is offering the child to us to hold as well. This is not a possessive embrace, but one that presents the baby to us, to our world, to all who want to take him in their arms and into their hearts – to hold him, for he is given to us as well.

For all the lines of age and care on Joseph’s face, Reni does not give us another Simeon. It is true that we are presented with fragility: the fragility of the infant and the fragility of a man near the end of his life. Yet, Joseph is neither looking back to a past nor gazing into an unrealised future. He is looking immediately into the face of the child, beholding him ‘face to face’. In this, he is reminding us that the promise is already fulfilled, and in the eternal life that the child offers us, we, too, will see him ‘face to face’.

If, like the infant Christ, we look into the gentle worn face of Joseph, we know that this is a man will take up the responsibilities of fatherhood entrusted to him. Whatever the cost, he will care for, protect, nourish and respect the son he has been given and wife whom he did not expose or reject in her hour of need. But this we already know from the gospel’s account: Joseph is that good man who trusts the way in which grace works in another. He will protect it even though it will disrupt his life. He does not fear the cost.

And so, in this portrait of Joseph and the Christ child, Reni not only binds them together in a mutual gaze, he places them in a circle of light that their love for each other creates. It is defined by the flow of Joseph’s cloak in which they are both wrapped – suggestive of its own type of manger and swaddling bands. It is a circle of light which the darkness does not disturb nor penetrate. Through faith and love, Joseph is inviting us to enter the circle; to see and wonder at the God who has made himself a child who needs to be held.

In our world of absentee fathers and confused masculinities, Reni gives us a portrait of a tender strength at the service of a vulnerable life. He has given us the portrait of a just man who is not afraid to remain hidden, but on whose fidelity and courage we can depend. He has given us a glimpse of a father’s heart.

Hail, Guardian of the Redeemer, Spouse of the Blessed Virgin Mary. To you God entrusted his only Son; in you Mary placed her trust; with you Christ became man.

Blessed Joseph, to us too, show yourself a father and guide us in the path of life. Obtain for us grace, mercy and courage, and defend us from every evil. Amen.[ii]

James Hanvey SJ is Secretary for the Service of the Faith for the Society of Jesus.

Painted spaces: Art for a Covid-Advent. 2. ‘The Annunciation’ by Fra Angelico