Skip to main content
Photo by Dean Sas at flickr.com 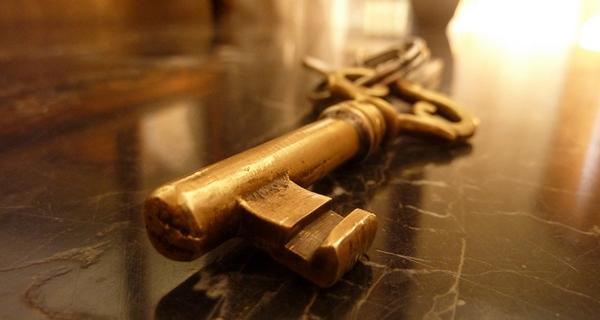 When I lived at home, the ritual of ‘locking the big door’ was often delegated to us children as we were going to bed.  The ‘big door’ was actually a pair of storm doors, but the exciting part of the job was that there was a very large key to open and shut them.  That key was a means of protection from and a way out to the outside world. When I first came across the phrase ‘Key of David’, my model was our big door key.  Many years later I was visiting a castle and in one of the rooms there was a display of locks and keys, including some absolutely giant ones. Those keys then became my idea of the Key of David.  And they helped me to model my understanding of that passage from Isaiah 22:22:

What did the key of David do? It opened the door into the King’s palace. It also closed the door to the King’s palace. A rope was put through the key and it hung over the shoulder and down the back of the keeper of the key, who was in a very powerful position indeed. In the passage from Isaiah, we hear that this power has been abused by Shebna, who is replaced by Eliakim as the new key holder.

In the letter to the Church at Philadelphia in Revelation 3:7-12 we read:

These are the words of the holy one, the true one, who has the key of David, who opens and no one will shut, who shuts and no one opens:

‘I know your works. Look, I have set before you an open door, which no one is able to shut. I know that you have but little power, and yet you have kept my word and have not denied my name.’

The one who now holds the key of David is the Risen Jesus and the words of the prophecy of Isaiah are alluded to here. What does the Key of David open now? The Key has opened the door to the heavenly Kingdom and the door remains open because of the Philadelphians’ proclamation of the name of Jesus.

This is not the only time that a key is mentioned in the Book of Revelation.[i] Towards the end of the preamble to the seven letters, we read:

I would suggest that the content of these two verses from Revelation taken together come close to our fourth antiphon, O Key of David

O Key of David, O royal Power of Israel,controlling at your will the gate of heaven:Come, break down the prison walls of deathfor those who dwell in darkness and the shadow of death;and lead your captive people into freedom. 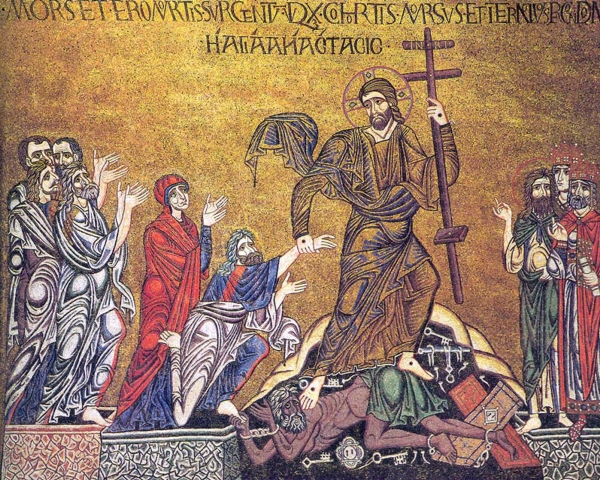 In the picture from Saint Mark’s in Venice, we see the risen Jesus leading the captive people into freedom. It is Adam and Eve and their descendants that he is drawing out of the prison walls of death and the darkness. We also see him bestriding the figure of Hades whose scattered keys are now useless, because the key that opens the gate that has imprisoned the captives is the cross of the Risen Lord.

Why do we pray this antiphon in the lead up to Christmas, when it is much easier to associate Christ’s journey into the realm of darkness and death – his descent into Hell, as the Apostles’ Creed has it – with Holy Saturday? Well, the language of keys can help us to express something fundamental about Jesus and about the Church.

At Caesarea Philippi, in Matthew 16:13-20, Jesus gives the keys to the Kingdom of Heaven to Peter, together with the power of binding and loosing. Is Peter another Shebna or another Eliakim – is his task to block undesirables from getting in? Surely not: the kingdom to which Jesus gave Peter the key is one in which undesirables were welcome, and Jesus had strong words for those who did not share this vision:

But woe to you, scribes and Pharisees, hypocrites! For you lock people out of the kingdom of heaven. For you do not go in yourselves, and when others are going in, you stop them. (Matt 23:13-14)

But if there is only one person with the key – Peter – how are the scribes and Pharisees able to lock people out of the Kingdom? There is a clue to this in Jesus’s reference to the power to bind and loose which he gave to Peter along with the keys. Jesus later expands on this:

This time Jesus is addressing the whole community, not just one individual, and this teaching follows an exploration of forgiveness in the community, which concludes:

..if the offender refuses to listen even to the church, let such a one be to you as a Gentile and a tax collector.

At first sight or hearing, this seems to be a formula of exclusion, but the praxis of Jesus towards tax collectors and Gentiles subverts its apparent meaning. In the gospels, we see over and over again people being healed and restored to their family and community. Not only that, but we hear the parables of Jesus which have the power to unlock our imagination and move from the ordinary, from the everyday, to a place of transformation.

Pope Francis in Amoris Laetitia talks at length about the logic of the Gospel being to integrate, to let people in, not keep them out:

The logic of integra­tion is the key to their pastoral care, a care which would allow them not only to realize that they belong to the Church as the body of Christ, but also to know that they can have a joyful and fruit­ful experience in it. They are baptized; they are brothers and sisters; the Holy Spirit pours into their hearts gifts and talents for the good of all. Their participation can be expressed in differ­ent ecclesial services, which necessarily requires discerning which of the various forms of exclu­sion currently practiced in the liturgical, pastoral, educational and institutional framework can be surmounted (§299).

If the logic of Jesus’s – and by extension, the Church’s – ministry is to integrate, to include rather than exclude, we should pay attention to the binding and loosing phrase. If we have the power to bind people and exclude them, then we also have the power to loose people and free them to enter the kingdom – so if we choose to do the former, is that not a failure of what we are called to do? In this recent Year of Mercy we will have pondered the difficulty of forgiving others or even allowing ourselves to be forgiven. To give into this difficulty is to freeze ourselves and others in a place of exclusion, locking people out. There is a quotation from the great Jewish philosopher Emmanuel Levinas that we need to hear:

God is not able to forgive wrongs done against other persons: only the person wronged can offer forgiveness. This is a consequence of taking responsibility seriously.

Even if we do not entirely agree with this, to take it seriously is to begin to draw people in from exclusion and darkness, to use the power of the Key of David to let them in. The newness of the child whom the antiphons celebrate challenges us to begin again not to remain locked into destructive patterns.