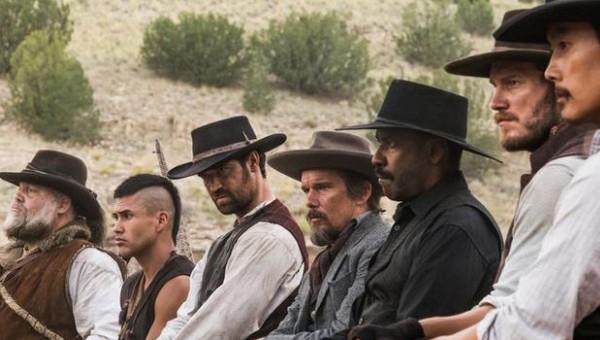 The original and much-loved The Magnificent Seven is itself based on Akira Kurosawa’s classic 1954 film, Seven Samurai. Thus, in Antoine Fuqua’s latest film, we have a remake of a remake. One always wonders what the purpose is of such projects. Is there a particular issue that can be mined now, which perhaps could not be explored when the original was made? Is there something to be said about contemporary society through the themes and characters of the film? Unfortunately, this version of The Magnificent Seven doesn’t fulfil either of those objectives – the aim seems to be to cash in on the popularity of its predecessor.

Each of the Seven incarnations tells a simple story: a poor village is held to ransom by merciless thieves and so seven outlaws are hired to save the oppressed town. Haley Bennett’s Emma is the grieving woman who urges the group to come and protect the village. With the likes of Denzel Washington (as lead gunslinger Chisholm), Chris Pratt (a drunken Faraday) and Ethan Hawke (as the wavering Goodnight Robicheaux) in the gang, and Peter Sarsgaard chewing the scenery as arch-villain Bogue, the film has drawn attention and expectation to itself. Behind the camera is the director of Training Day and Shooter, so we know we are in for a hard-edged, explosion-filled spectacle.

And yet, such is the clamour to identify the unique aspects of each of the magnificent seven that too little time is given to the sense of dread and panic of those in the village. The audience may find some empathy for the lead characters –if only because of who plays them – but very little pathos is engendered for the village population whose livelihoods are at risk. It appears as if everyone is merely waiting for the big shoot-out at high noon.

This film – even down to its closing credits which are straight out of the Golden Age – definitely harks back to a bygone era. Unfortunately, its freshness, too, is gone: very little is offered here that is new, except perhaps a pseudo-theology of retribution before mercy. When Emma first hires the outlaw crew, she is in search of righteousness; however, soon enough she declares that ‘[she]’ll take revenge’. So perhaps the real relevance of this remake of The Magnificent Seven is the fact that it comes to cinemas during the Year of Mercy, positing a violent, compassion-free alternative to Pope Francis’ insistence on mercy as the divine language.

A burnt-out church provides the hollow backdrop to a war fought on the dusty streets outside a prostitute-filled saloon. A ferocious Christianity is professed by many characters, but each remains entrenched in a thirst for blood and a desire for ‘righteous’ murder. This is the type of film which shamelessly, if implicitly, proposes that God blesses a ‘shoot first, seek forgiveness later’ ethos. The black-and-white morality in which the film drapes itself is enhanced by Mauro Fiore’s cinematography: harsh contrasts of crushed blacks and searing light are used throughout. This is a merciless world, where revenge precedes forgiveness, and the way of the gun trumps the way of the cross.

And so, this remake might well suit those who enjoy a typical Western, or who are hankering for some big screen action and glib one-liners. But those who are entrenched in Pope Francis’ call for mercy might well find the film problematic on many levels.