Skip to main content
Photo by youssef naddam on Unsplash 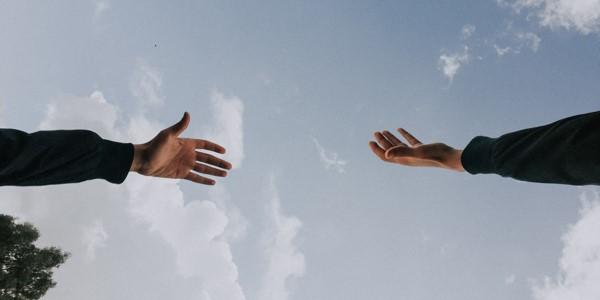 Ignatius of Loyola believed that love ought to express itself in deeds rather than words, but what do those deeds look like when we are asked to separate ourselves from one another? Tim McEvoy asks us to consider human limitation and divine possibility during a time when we are all called to enter into our own ‘passion’.

What does ‘love your neighbour as yourself’ look like in a lockdown scenario? This is a question that has been with me in recent days and that continues to challenge. In the face of government and medical advice to socially distance or even isolate ourselves completely, how do we continue to fulfil that most urgent and fundamental of commandments? To a cradle Catholic brought up on parables such as the Good Samaritan, to be told to avoid contact with others deliberately and cross over to the other side of the street feels painfully counter-intuitive even when the clear and essential reasons for it are understood.

One of the cruellest aspects of the Coronavirus pandemic seems to be that, at a time when the consolation of human contact is needed by so many more than ever, it is the very thing that we are asked to forego. What form can love take when deprived of its touch, its immediacy, its flesh and bones? How do I still respond compassionately and humanely to the needs of others around me, even though physically separated from them?

These are big questions that might challenge each of us in different ways. Of course, love takes many and varied forms depending on the concrete circumstances in which it finds itself. For Ignatius of Loyola, love was primarily about action and ought to express itself in deeds rather than words. A better question in that case might be: what is the most loving thing to do in the reality of the here and now, within the limits of what is possible? As Gerry W. Hughes SJ once wrote, ‘God is in the facts’, and so however unwelcome or unchosen the facts of our life and experience are now, how we respond to them is within our grasp.

Many people, it need not be said, are going about responding to the needs of their neighbour right now with courageous and compassionate action. Those health professionals tasked with caring for the sick and dying are simply doing their jobs, what is required of them, and are meeting an urgent need at no slight risk to their own health. As are transport workers, police officers, teachers, supermarket staff, those working to produce and supply food and other essential supplies to our homes and hospitals, to name but a few. The response of communities and individuals in creative new ways to care for and console the vulnerable and lonely in our midst is both humbling and inspiring. For others of us, how we might respond in our own context may be less obvious and be a matter for careful individual and communal discernment.

It may be challenging to discover that the most loving course of action for us at the moment is to protect our own health and bodies – particularly if we fall into an ‘at risk’ category – or to separate ourselves and our families physically from our community and those we most love in order to slow the spread of disease. Such actions demand self-denial and, even, loving self-sacrifice. It can feel profoundly disempowering and go against the grain of our natural desire to help and be of use to others. Such experiences of what we might call ‘passion’ – in the sense of feeling ‘passive’, being ‘done unto’ rather than doing – can nevertheless be loving if entered into intentionally.

For Christians this is part of the mystery of human suffering and the trust that God can be discovered and experienced intimately with us in all things – even in the darkest moments of our lives – and that, with God, we can also be profoundly united in solidarity with the suffering of others. In Ignatian language, this is the experience of the ‘Third Week’ of the Spiritual Exercises, when the retreatant chooses to accompany Jesus during the period of his being ‘handed over’, his Passion, suffering and death, and discovers that Jesus, too, accompanies us through our own trials. The spiritual gift or grace that is asked for at this time is compassion: literally ‘to suffer with’ Jesus out of deep, committed, personal love. Our compassion for God emerges in response to the compassion of God-with-us.

It is hard not to be challenged by the many, often heroic, examples in the past of saints who have chosen this same path during periods of sickness, war or natural disaster. Many have made that radical choice to accompany others in their time of trial, discerned within the reality of their present needs and circumstances. Many ordinary men and women continue to do so, those ‘saints next door’ as Pope Francis puts it.

In his history of the first years of the Society of Jesus, Jesuit historian John O’Malley highlights not a few such examples. Visiting the sick and supplying the physical and spiritual needs of those most affected by famine, flood or disease was an intrinsic part of the early Jesuits’ self-identity and mission – an early form of their engagement in social justice, as it would much later become known. Direct physical or financial assistance was a daily dimension of their work whether they were begging for alms, clothing or accommodation, or setting up new institutions to provide such care when it didn’t already exist in the community. ‘Wherever the Jesuits went, they eventually found their way to the hospitals,’ O’Malley writes, visiting, feeding, tending the sick and hearing confessions.[1]

Such direct contact came at great personal risk during the repeated plague epidemics in sixteenth-century Europe. In the plague outbreak in Perugia in 1553, Jesuits remained almost alone to nurse and minister to the sick and dying in hospitals and in their homes. They frequently found themselves filling a gaping hole in society where medical and pastoral attention was desperately needed in an age before the welfare state and modern healthcare provision was even dreamed of.

Yet even in these circumstances, wisdom and discretion were required. When Diego Laínez – one of Ignatius’s first companions – became General of the Society it was discerned that a more cautious policy was required. However, even with this in place, a number of Jesuits continued to put themselves in harm’s way during the plagues in Rome in 1566, 1568 and in Lisbon the following year, when seventeen Jesuits died while accompanying plague victims.[2] Clearly this was a difficult matter and a dangerous dimension to ministry that required ongoing review of practice.

In more recent times, we might learn from the example of Pedro Arrupe, the Superior General of the Society of Jesus in the years immediately following the Second Vatican Council who, more than any other, put social engagement back at the forefront of Jesuit ministries worldwide. It was he who founded the Jesuit Refugee Service in 1980 in response to the migration crisis that followed the Vietnam war.

As a Jesuit missionary in Japan, Arrupe witnessed first-hand the devastation wrought by the first atomic bomb explosion in Hiroshima in August 1945. Making use of his previous medical training, he turned the Jesuit novitiate there into a makeshift field hospital to care for the wounded and dying at a time when the effects of radiation were barely comprehended. The harrowing experience would be forever etched into his memory. Regarded by many as a ‘second Ignatius’, a second founder of the Society, Arrupe – a Basque, like Ignatius – was similarly a man of action moved by intense love for God and for his neighbour.

Yet Arrupe also learned from his, perhaps equally striking, experiences of passion. The powerlessness and lack of freedom that he experienced following a debilitating stroke in 1981 proved to be one of the defining features of his life. Partially paralysed and with severe speech impediment, his ministry for the last ten years of his life consisted of praying for and with his brother Jesuits and those they accompanied. One of his prayers from these last years continues to speak into the experience of many today who find themselves in situations beyond their control, whether through illness, infirmity or external circumstances:

More than ever, I now find myself in the hands of God. This is what I have wanted all my life, from my youth. And this is still the one thing I want. But now there is a difference: the initiative is entirely with God. It is indeed a profound spiritual experience to know and feel myself so totally in his hands.[3]

Sometimes action – generous, even self-sacrificial – is required of us. At other times, we are asked to walk a different path. Compassionate accompaniment of others may take unusual or unexpected forms. There may come times in life when our primary means of expressing love for others and our world is to pray for them and surrender what we cannot do or control to God.

Whatever our situation and whatever means lie at our disposal, we might ask ourselves how best we can respond humanly and compassionately to the needs of those around us at the present time. What is the most loving thing to do in the reality of my here and now, within its human limits and its divine possibilities? What is certain is that no expression of love – however small or seemingly insignificant – is wasted. As Pope Francis, another great follower of Ignatius, puts it:

No single act of love for God will be lost, no generous effort is meaningless, no painful endurance is wasted. All of these encircle our world like a vital force. Sometimes it seems that our work is fruitless, but mission is not like a business transaction or investment … it is something much deeper, which escapes all measurement … The Holy Spirit works as he wills, when he wills and where he wills.[4]

Call and response in St Ignatius and St Francis

Laudato si’ and Covid-19: Can praises still be sung in a strange land?