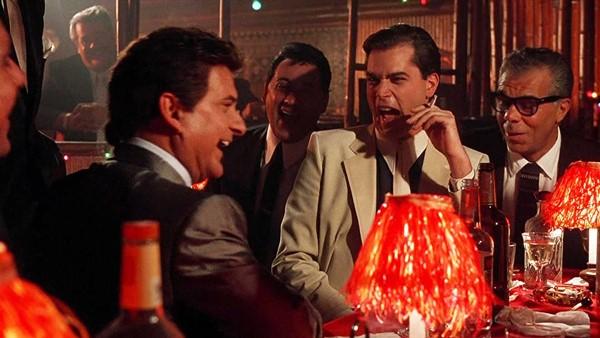 If you have found yourself spending more time in front of the small screen in recent weeks, you are certainly not alone. Jake Martin SJ suggests that ‘instead of seeing film and tv as an “escape”, we can instead look to integrate it into our spiritual practice’. How can we learn to identify the films and programmes that are leading us towards consolation rather than desolation?

Goodfellas (Martin Scorsese, 1990) is one of those films that film-lovers adore referencing thanks to its highly quotable screenplay and its technical brilliance. Many a wine-filled or not-so-wine-filled evening has culminated in recitations of the film’s most audacious sequences.

So what better way to pass the time during a lockdown than by watching Goodfellas all over again? I looked forward to seeing those wonderfully kinetic and quotable scenes that I had repeated over and over with my friends through the years. But as I discovered one recent dark night alone in the Jesuit community television room, those ‘fun’ scenes bear down a lot heavier on the soul when viewed within the larger context of the entire film – and in the midst of a pandemic. Sitting in the dark as the closing credits rolled across the screen, I felt no sense of fun, no sense of energy, and absolutely no desire to quote or re-enact any part of the film I had just watched. I felt empty.

Of course, context plays a part; in more stable times, it’s easier to distance oneself from the film’s not-so-hidden nihilistic core and focus instead on its unreal, almost cartoonish romanticising of humour-infused violence. It’s much harder to ignore the film’s inherent pessimistic view in these days of uncertainty, when vulnerability in its various manifestations has become our primary existential mode of operating. What I’m trying to say is that there is a time and a place to watch a film, and right now is not the time for films that leave us feeling sad and hopeless.

So, what kind of films should we be watching during this time when memberships and viewers on various streaming platforms such as Netflix have increased at a staggering rate? Well, suffice to say hyperviolent films about the underworld are off the table, but that still leaves a lot to choose from. As has already been said by many before me, one of the areas that the lockdown does not inhibit is our chance to develop and cultivate our relationship with God. These days of lockdown are a chance to grow and to go deeper spiritually.

For many of us in the days before Covid-19, film, television and other forms of new media were something very much separate from our spiritual realm; but then we had more tangible resources, such as our parish community, retreat centres, classes, etc., which we can only access now in a limited way. Just as we see various new means of coming together emerging across various social media platforms, so too must we begin to think creatively about how to nurture our souls from within the confines of our home. So, instead of seeing film and tv as an ‘escape’, we can instead look to integrate it into our spiritual practice.

What I’d like to suggest is that we watch film with discerning hearts, not just passively taking in whatever comes before our eyes, but actively engaging with the text of the film in a spiritual way. Before we do that though, we need to discern between the wheat and the chaff, that is, distinguishing between those films that can move us spiritually and those films that are going to leave us feeling empty and unfulfilled.

In the Rules for Discernment of Spirits, St Ignatius distinguishes between two interior movements: consolation and desolation. Ignatius says that spiritual consolation is a movement within the soul which causes profound love for God and also manifests in an increase in hope, faith and charity (SpExx §316). Spiritual desolation causes the converse to occur, wherein the soul feels far apart from God, filled with despair, fear and rage (SpExx §317). My experience of watching Goodfellas was one of desolation; I walked away from it feeling hopeless and morose. I also realised that at this time in my life I need to be more discerning about what I watch and choose films that are consoling. When I say consoling films, I don’t necessarily mean ‘feel-good’ films, because a film does not have to make us feel good to console us; nor am I specifically speaking of ‘comfort’ films – because that which comforts us is not always good for us, as anyone who has eaten a tub of ice cream at midnight after a break-up can tell you. What I mean is those films that will serve to bring me closer to Christ and increase my faith, hope and charity.

I should say this does not necessarily mean just watching The Passion of the Christ (Mel Gibson, 2004) and The Ten Commandments (De Mille, 1956) on a loop; indeed, explicitly religious films have at times done more harm than good. Over the course of the next few weeks, I hope to introduce you to a handful of consoling films, each different in their genre, style and themes, and thereby assist you in beginning to be a spectator in a different, more engaged way. I hope to challenge you to be more discerning in both your viewing choices and your viewing behaviours. By becoming more engaged spectators we can turn the process of film-watching into an experience that does not just ‘pass the time’ in the midst of a lockdown, but one that becomes a spiritually enriching practice that deepens your faith and brings you closer to Christ.

Jake Martin SJ is a doctoral student in film at Trinity College Dublin and a regular contributor to America.