Skip to main content
Photo by Nick Johnson at flickr,com 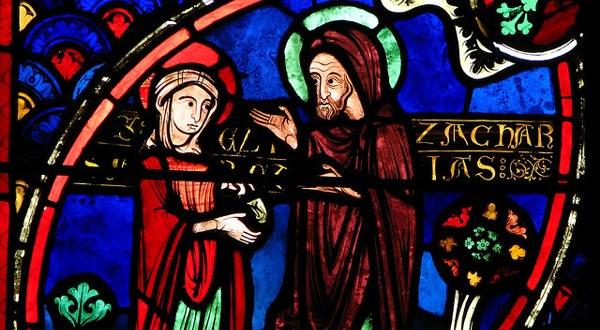 As Christmas approaches, we sidestep from tracing Jesus’s ancestry through Matthew’s genealogy to spend some time with those relatives of Jesus with whom Luke opens his gospel. How does Luke place Zechariah and Elizabeth in the wide lineage of salvation history, and how does their son, John the Baptist, carry this forward? John Moffatt SJ helps us to further investigate Jesus’s familial line – Jesus: Who Do You Think You Are?

The gospels are texts with long roots, consciously tapping into the narrative and language of the Old Testament to create something distinctive and new, and yet organically one with what has gone before.   In the opening chapters of Luke’s Gospel, the echoes of Old Testament phrase and incident are particularly dense.  We are told that the central characters, Zechariah, Elizabeth and Mary are related to one another by blood and marriage, and have that much of a common, family ancestry.  But more than this, thanks to Luke’s careful use of rooted language, all that they say and do reveals how deeply they belong to and represent the wider tradition of the whole faithful people of Israel at this turning point of its history.

Both Zechariah and Elizabeth come from priestly families.  Zechariah belongs to the section that traces its ancestry back to Aaron through Abijah.  Elizabeth is described simply as ‘from the daughters of Aaron’.  We can begin by dwelling a moment on the resonances associated with Abijah, Zechariah’s ancestor.   In 1 Chronicles, the service at the sanctuary of the Lord is being rationalized under David.  The priestly families, descended from Aaron, are divided into twenty-four groups; one of those groups is headed by Abijah. (1 Chronicles 24:7-19)

That scene is set in the glory days of David’s reign.  However, there is another priestly Abijah mentioned in Nehemiah, from a very different context and era.  This ancestor takes us to the time of return and rebuilding after seventy years of exile.  The Temple is a ruin, and a great work of restoration and renewal still lies before those who have made the journey out of Babylon to find their home.

The work of the sanctuary and of the priesthood led by Aaron is described devotedly from the end of Exodus, and all through Leviticus.  There is much about ornament and dress, but more importantly there is a work of praise and sacrifice on behalf of the people.  The priests mediate the relationship between the people and the presence of God within the Holy of Holies.  There is no separation between things of human concern and divine concern – offences against one another are offences against God, and offences against God have repercussions for the whole people.  The rituals of the sanctuary allow a constant work of reconciliation and a restoration of lost balance, the forgiveness of sins individual and collective.  Furthermore the priests have a role in the physical health of the community.  Sickness is never a purely private or secular affair and the priests again have a role as mediators, allowing back into the community those who have been quarantined.

By naming Mary as Elizabeth’s cousin, Luke implies that Mary and her son, too, share something of the priestly spirit.  As we have seen it is a spirit which not only leads people to God in offering sacrifice and praise, but also mediates healing, reconciliation and the forgiveness of sins.  It is just such a ministry that John the Baptist will take from the Temple into the desert, and Jesus, in his turn, will take out into the streets.

The Temple itself, the restored descendant of the Exodus sanctuary, is a constant reference point in the opening and closing chapters of Luke’s Gospel and the opening chapters of Acts.  It is here that Luke sets the first revelation of the Good News.   We begin by witnessing a privileged moment in Zechariah’s life as a priest (Luke 1:8-23).  He is chosen from his family section by lot to offer the evening incense sacrifice.  To do this he must enter the sanctuary itself and stand before the veil concealing the Holy of Holies.  In that climactic moment of closeness to the most sacred place on earth, wreathed in the incense of the evening sacrifice, he sees Gabriel, angel of the Lord and receives ‘good news’: the improbable message that his wife, Elizabeth, will conceive and bear a son.

Zechariah’s cautious demand for a sign earns Gabriel’s rebuke.   His enforced silence itself, ironically, becomes the sign that good news has genuinely been brought to him and to the whole people.

And there is another key.  The story of an ageing couple without child places Zechariah and Elizabeth beyond any one blood-lineage and locates them in a wider lineage of salvation, the lineage of those whose lives have been touched and lifted up by God.   Again and again in the narratives of Israel and Judah, God has saved his people by raising up rescuers: priests, judges, prophets, kings, warriors.  But again and again that narrative of salvation for the whole people begins with the narrative of salvation for faithful, humble individuals.

Thus the story of Samuel, prophet and last of the Judges, begins with Hannah pouring out her heart before the Lord and begging him to take away the shame of her barrenness.   Hannah’s prayer is heard. Her later words of triumph at the power of God to make the barren fruitful and raise up the lowly will be echoed in the Magnificat, the great New Testament hymn placed by Luke on the lips of Mary as she encounters her older cousin, now six months pregnant.  The personal triumph of the vindicated woman, whose ‘shame has been taken away’ prefigures the rescue that God will bring to his people through the new child.

We can trace this lineage still further back.  There is the mother of Samson, the hero who will live like Elizabeth’s son, a Nazirite, and protect God’s people from their enemies.  Rachel, the beloved wife of Jacob, is long barren, until at last she conceives and bears Joseph, who will return from the dead to rescue his father and brothers in their time of need.  Last but not least are Abraham and Sarah, who laughs when she hears the prophetic voice of three strangers saying that she shall bear a son.  Yet from her the whole people of God shall be born.

The personal vindication of the barren wife heralds a saving gift for the whole people.  Elizabeth carries the prophet who will announce the call to repentance and prepare the way for the Lord.   In her sixth month she anticipates that message as she speaks prophetic words of her own to her cousin, recognising her as the ‘Mother of my Lord’.   The meeting of the two cousins to help each other in their need is at one level simple and homely; at another, it declares the deeper pattern of God’s work with his people.

When at last John is born, Zechariah’s speech is set free. He too becomes a prophet.  In the Benedictus he sings of that saving work performed throughout the whole history of God’s people and about to take a new turn in his own time.

John himself, carries all this history and this promise, and does so as a child of a priestly line.  There is a modern theory that he may have spent some time with the Essene communities in the Judaean desert before he began his preaching and his baptism.  Whether this is so or not, the thought helps us see John within the movements of his age.  There were other men of priestly family who rejected the rule by the Jerusalem elite and sought to recreate the essence of the Temple and its purposes elsewhere, out in the wilderness, away from Herod’s magnificent esplanade.

In John the magnificence of the cult dwindles to the sound of a voice in the wilderness, declaring the abiding word of God.  That voice takes us back to the age of the Consolation of Isaiah and the return of the exiles, a people waiting to be restored by the grace of God.  The water flowing from Ezekiel’s visionary Temple becomes John’s Jordan, bringing a first baptism of peace and pardon to the ordinary man and woman, and making the bitter waters sweet.

Mission is the heartbeat of the Body of Christ