Skip to main content
Photo by scottgunn at flickr.com 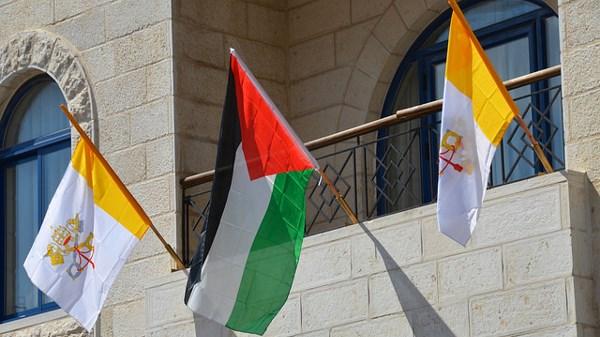 Last week’s headlines about the Vatican’s recognition of ‘the State of Palestine’ don’t do justice to the rich and complex history of the Church’s commitment to the Holy Land, its people and places, says David Neuhaus SJ. He describes how the Holy See’s discourse on the Israeli-Palestinian conflict has developed over nearly 70 years.

In recent days, Palestine and Palestinians have been very present in the Vatican. On 13 May 2015, the Holy See announced that the comprehensive accords with ‘the State of Palestine’ were being submitted for ratification to the respective authorities after the bilateral negotiations between the two sides had achieved their goal. On 16 May, President Mahmoud Abbas visited Pope Francis and was received as a head of state. On 17 May, Pope Francis canonised the first two Palestinian saints of modern times, Carmelite Mary of Jesus Crucified (Mariam Bawardi) and Marie-Alphonsine Ghattas, foundress of the Sisters of the Rosary.

Some have rejoiced with the Palestinians, seeing these steps as important progress in recognising the suffering of the Palestinians and their legitimate rights. Others have been dismayed at the consequences these events might have for relations with the State of Israel and the implications for dialogue with Jews. It is important to put the events of the past days into historical perspective, recognising the development of the Catholic Church’s position on the Israeli-Palestinian conflict. The Catholic Church has been following closely the developments in Israel and Palestine for decades.

After 1948, the Holy See repeatedly expressed deep concern both for the status of the Holy Places and the destiny of the Christian Palestinians, many of whom lost their homes alongside their Muslim compatriots in the first Arab-Israeli War in 1948. When Pope Paul VI visited the Holy Land in 1964, meeting with both Israeli and Jordanian political authorities, he made no explicit mention of the State of Israel or of the Palestinians. The Second Vatican Council inaugurated a new age of dialogue with the Jews; Nostra Aetate clearly explained: ‘(I)n her rejection of every persecution against any man, the Church, mindful of the patrimony she shares with the Jews and moved not by political reasons but by the Gospel's spiritual love, decries hatred, persecutions, displays of anti-Semitism, directed against Jews at any time and by anyone.’[1] The document made no reference to the contemporary political realities in the Holy Land.

As dialogue with the Jewish people developed, the demand by Jews that the Church recognise the State of Israel was insistent. However, the Church pointed out that while it understood the ‘religious attachment which finds its roots in Biblical tradition’, Catholics need not make ‘their own any particular religious interpretation of this relationship’. ‘The existence of the State of Israel and its political options should be envisaged not in a perspective which is in itself religious, but in their reference to the common principles of international law.’[2]

Pope Paul VI was the first pope to affirm explicitly the Palestinians as a people rather than simply as a group of refugees. In his Christmas message in 1975, he said: ‘Although we are conscious of the still very recent tragedies which led the Jewish people to search for safe protection in a state of its own, sovereign and independent, and in fact precisely because we are aware of this, we would like to ask the sons of this people to recognize the rights and legitimate aspirations of another people, which have also suffered for a long time, the Palestinian people.’

Although Pope John Paul II received Chairman Yasser Arafat, leader of the Palestine Liberation Organisation in a private audience in 1987, it was the beginning of the peace process between Israelis and Palestinians in the early 1990s that led the Holy See to establish diplomatic relations with both the State of Israel (in 1993) and the Palestine Liberation Organisation in lieu of a future State of Palestine (in 2000). It seemed then that the conflict was ending and that soon the two sides would agree on the permanent and internationally recognised borders of the two states, Israel and Palestine. Alas, it was not to be.

Before hopes for a resolution of the Israeli-Palestinian conflict were yet again dashed with the entry of Prime Minister Ariel Sharon into the Haram al-Sharif, the precincts of the Al-Aqsa Mosque, and the beginning of the Second Intifadah in September 2000, a Basic Agreement was signed by the Holy See and the Palestine Liberation Organisation in February 2000. The agreement called, ‘for a peaceful solution of the Palestinian-Israeli conflict, which would realize the inalienable national legitimate rights and aspirations of the Palestinian people, to be reached through negotiation and agreement, in order to ensure peace and security for all peoples of the region on the basis of international law, relevant United Nations and its Security Council resolutions, justice and equity.’[3]

Pope John Paul II’s visit to the Holy Land in March 2000 was ground-breaking as it set in place the gestures that were repeated by the pontiffs who followed in his footsteps. John Paul II was concerned with expressing the fullness of what had been achieved in the dialogue with the Jews, the fruit of Nostra Aetate, without forgetting the Church’s concern for the Palestinians and the commitment to working for justice and peace. The pope not only visited Israeli and Palestinian leaders, Jewish and Muslim shrines, but also went to Yad VaShem, the monument that commemorates the victims of the Shoah, and Aida Refugee Camp, where Palestinians have been languishing since 1948.

Pope Benedict XVI, during his visit in 2009, further developed the conceptual clarity of the Church’s teaching on the conflict that has afflicted the Holy Land for almost seven decades. Without flinching, he evoked over and over again the Church’s vocation to build bridges rather than walls. In clear words he addressed the distressing reality of the Holy Land where walls are more in evidence than bridges: ‘Let it be universally recognised that the State of Israel has the right to exist, and to enjoy peace and security within internationally agreed borders. Let it be likewise acknowledged that the Palestinian people have a right to a sovereign independent homeland, to live with dignity and to travel freely. Let the two-state solution become a reality, not remain a dream.’[4]

The Holy See has developed over the past decades an important discourse on the conflict between Israelis and Palestinians, a discourse that takes into account the Church’s commitment to the Holy Land and its Holy Places, to the Christian communities, to a theological understanding of the Biblical tradition, to the dialogue with both Jews and Muslims, and to the Church’s mission to promote justice and peace. The Church continues to seek a way to proclaim the gospel values of justice and peace, reconciliation and pardon in Israel and Palestine.

This might indeed be the time to remember the words spoken by Pope Francis as he played host to Presidents Peres and Abbas in the Vatican last Pentecost:

We know and we believe that we need the help of God. We do not renounce our responsibilities, but we do call upon God in an act of supreme responsibility before our consciences and before our peoples. We have heard a summons, and we must respond. It is the summons to break the spiral of hatred and violence, and to break it by one word alone: the word ‘brother’. But to be able to utter this word we have to lift our eyes to heaven and acknowledge one another as children of one Father.[5]

[2] Notes on the correct way to present Jews and Judaism in preaching and catechesis in the Roman Catholic Church (1985), VI, §1.

[3] Basic Agreement between the Holy See and the Palestine Liberation Organization (2000), Preamble.

‘He shall judge the poor with justice’