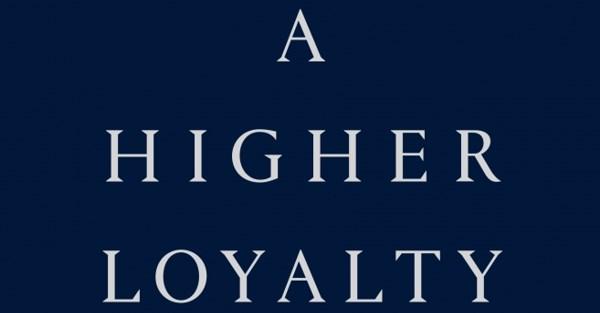 The publication of this book by the FBI director who was dismissed in May 2017 by President Donald Trump had me intrigued.  I thought that a train journey back from Glasgow to London and a half-price offer on the book would combine to provide me with a few hours of perverse amusement at tales of the boorish behaviour of Mr Trump.  At the moment, this form of entertainment seems to be the only way to alleviate the deep depression at the state of leadership at the highest level in the United States.  It was not a very edifying indulgence on my part and, happily, my expectations were not met by the literary fare served up.  For this book is no journalistic hand-grenade in the pattern of Michael Wolff’s Fire and Fury, but a well-written bombshell, part autobiography and part commentary on the ethics and culture of leadership; a fascinating read about the recent history of high level law enforcement and legal issues at state and federal level in the United States.

At the heart of the book is James Comey’s own story about the development of his career, starting from his childhood and his schooling. His narrative is interspersed with reflections on what he has learnt on the way, particularly from the leaders under whom he has worked, and the ethical framework that keeps him tethered to an authority greater than that of his immediate boss or of his own ego (a framework that he later suggests Trump does not possess).  Comey has learnt lessons in life from his family; from particular traumatic and painful experiences, including the loss of his son; from the example of good mentors (and, indeed, from the bad examples of Mafia bosses whom he prosecuted); in the culture of workplaces; and, apparently, though it is very understated, from his and his wife’s attention to Christian texts.  The way he describes his upbringing and work is refreshingly clear and inspiring, in contrast to the crude rhetoric of Trump and his party (‘Lyin’ Comey’).  Comey goes out of his way to stress his constant concern for the truth.  This might have made him sound cloyingly saintly; however, his explanations of how he developed that concern, partly from times when he felt guilty about not speaking out, give the narrative an authentic tone.

It is not a book, as the press might have it, primarily about Donald Trump.  It is well over two thirds into the book before any description of the arrival of Mr Trump at the White House appears.  However, the build up to Comey’s work under Trump, particularly the stories of his work on the cases of Mafia bosses, gives a huge crescendo effect to the shock of his encounters with Trump and his eventual sacking as FBI director.  Along with others, I was dubious about the motives of someone in Comey’s position immediately ‘telling all’ soon after his dismissal.  However, for those concerned about the management of the White House at the present time, it is not hard to understand how keeping silent on what he had recently witnessed would be, for Comey, a crime against the truth.

Although the contents of Ignatian leadership courses offered in various Jesuit institutions are not very well known to me, I would recommend A Higher Loyalty as good material for reflection on leadership in general and indeed on church leadership in particular.  Several years ago, Comey discovered how effective certain exercises that we often use in Ignatian reflection could be in helping staff to review important commitments or decisions in their lives – imagining oneself to be at the end of one’s life, looking back and reflecting on what would have been the better choice, for example.  Comey has quite often chosen lower-paid government jobs for their element of service rather than the private sector jobs that make the top rates.  He talks of leaders’ needs to balance self-confidence with humility.  He sees and promotes the importance of diversity in learning and the involvement of others.  He stresses the need for laughter and balance in our lives, as Pope Francis has done.  And, in contrast, Comey explains how the style of Mr Trump’s leadership reminds him of the loyalty codes that he encountered in his dealings with the Mafia. It seems to me that the scourge of clericalism, where it exists, could well be considered in the same vein – namely, a dangerous building of a non-challenging culture around a leader.

It will be fascinating to see how this book reads in a year or two’s time as the present presidency further unfolds.  While there is an overwhelming silence from political opponents to Trump, as no one dares waste their ammunition on him, it has taken a supposed political neutral to highlight the severe shortcomings of the present regime by calling all to a higher loyalty.

Understanding the ‘Imago Dei’: the thought of Barth, von Balthasar and Moltmann

This Changes Everything: Capitalism Vs the Climate