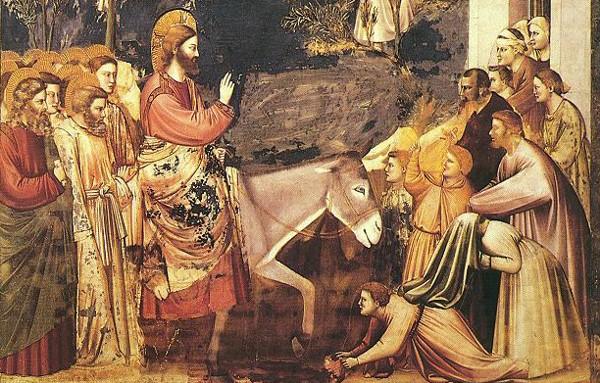 Rob Marsh SJ imagines himself in the place of Andrew, to whom Jesus is speaking in the gospel reading for the fifth Sunday of Lent, and gives voice to the medley of emotions at play in the disciple and the one whom he has followed so loyally. By considering the dynamic between them, we can join with Andrew in preparing to witness a glory the promise of which bewilders yet sustains him.

I’m Andrew, Peter’s brother. We’ve met, remember? I’m with Jesus. I like to tell people that I was the first one to know him. You remember? I used to be with John, the Baptiser, until he sent us looking for someone greater, remember, someone to set things finally to rights, settle with our Roman friends once and for all. It was three years ago I almost ran into him, Jesus, on the street and stammered some stupid question about where he lived. He must have thought me a right fool. But he just smiled and took me along with him. Did we talk that afternoon?! And not only then. I’ve stayed with him these three years, three long, dusty, confusing years. I’ve wondered, sometimes. Would I have stayed if I’d known what was going to happen? I don’t know. But first-disciples have a responsibility, an example to set for the others. And until this afternoon I’ve always thought I understood him.

Hmm … this afternoon. We’re all dead beat. Him as well. We’ve been too long on the road. Too long hiding from every prying eye that might turn us over to our own priests, of all people. Since the incident with Lazarus, we’ve had a price on our heads – at least on his – and it’s taking its toll. He’s been so quiet since then. Not like him, who always has a story to tell. Quiet. Brooding … Troubled. I sat with him in those days after we ran from Bethany. Sat with him as he stared out into the desert haze. Just there, at his side, as a good first-disciple should be. And I knew this was make or break – his last choice, his last chance at glory. Lazarus had been the last straw. And the rumours were of a deal between our people and theirs to get rid of him, make an example of him. But we knew we had the popular support, we knew that he only had to say the word and the people would rise up behind him and kick out the Romans, army and all! I knew, at any rate. I told him as he sat there, ‘this is the time, this is your hour.’ Everyone knew it, too. The word was buzzing around the countryside – ‘What do you think? Will he come? Will he come to Jerusalem for the Passover?’

I told him, it’s now or never. ‘You may as well walk away, go back home, if you don’t do it now, if you don’t march on Jerusalem, now. It’s do or die.’ That got him to look. To turn away from the desert’s shimmering heat and give me one of those looks of his that made me shiver. What did I say…?

But yesterday I got my wish. We turned our faces to Jerusalem, the whole bunch of us, and trudged back to Bethany. To Martha and Mary and Lazarus again. What a meal! What a party! He seemed his old self again that night, laughing and dancing. So alive. Until Mary brought out her precious scented oil and poured it all over him. ‘For my burial,’ he said with tears in his eyes. The glorious smell was everywhere. It made your eyes water. Oh, but Judas was furious at the waste!

The party mood was back this morning, hangovers or not, as we saddled him up and prepared to show Jerusalem a thing or two. And how the crowds came out, scenting change in the air – shouting, screaming, singing. Though I wish we’d have got him a proper horse and not the weedy thing he insisted on. Still the effect was electric, glorious. Now they’d see. Now something had to begin.

I was right and wrong, it turned out when some of my folks from Bethsaida turned up, all dressed up for the festival and wanting a closer look at Jesus. ‘We want to see him too,’ they said, ‘Don’t hog all the glory, Andrew.’

So I took them inside to the room we’d rented, all proud to be his disciple – his first disciple – and there he was, head in hands, with tears running down his nose and dripping on the floor. He looked at me and once more I shivered. ‘You were right, Andrew: the hour has come. Now you’ll see the glory you wanted.’ I couldn’t stop shivering but he kept on: ‘If I love my life so much I’ve already lost it but if I lose it I might find it again. Like a grain of wheat, unless it falls and dies it’s nothing but a grain, but if it dies – if it dies, Andrew – well then think of the harvest! There’s glory for you!’

I couldn’t answer him, couldn’t look at him. I’ve been wrong all these three years. Wrong about him. Wrong about glory. Wrong about myself. But right, too. I pushed him into this. … Which is why I’m staying. I am the first disciple after all. I have a responsibility. And I have to see him through to the end, I have to know how he can do this, and maybe, if I stay, I’ll get a glimpse of this glory.

This text was first preached as a homily to the Jesuit Community of the Jesuit School of Theology at Berkeley, Santa Clara University, in March 1997.