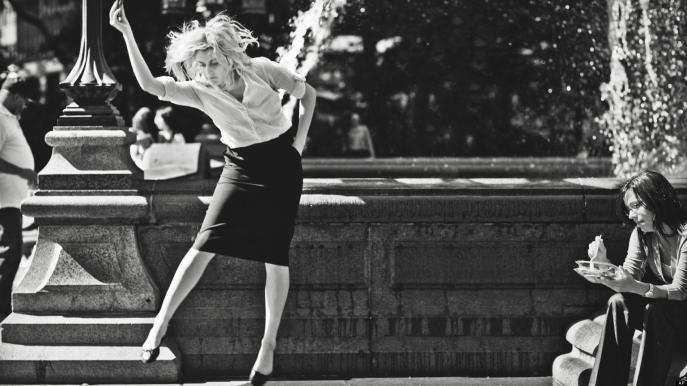 
Frances Ha documents the New York life of the scatty but irresistibly charming Frances (Greta Gerwig) as she struggles to avoid the clarity of life that is expected of her at the age of 27. Shot in nostalgic black and white, it is a nod to the romance of early French New Wave cinema (Georges Delerue's music for Truffaut’s films is quoted on the soundtrack) and monochrome Woody Allen films, the most obvious comparison being Annie Hall.

As with most ‘relationship films’, the protagonist is flawed but lovable. A friend refers to her at one point as ‘undateable’ and one can see why; eternal optimism and impulsive decision-making do not make for a secure existence – especially in New York. Add to this Frances’ pursuit of a career in modern dance and her existence is pretty hand-to-mouth.

It is a time that most of the audience will be able to recall – feeling uncertain about the future and putting all one’s efforts into relationships with friends who, over the years, have become a surrogate family having been there for one another through university, relationships, break-ups, first jobs, news jobs, parties etc. In this sense, it is Frances’ relationships with those around her, their reactions and interactions with her that make this film engaging.

The film’s ‘break-up’ comes from the distance that grows between Frances and her best friend and flatmate, Sophie (Mickey Sumner). Frances adores Sophie, declaring frequently that they are basically the same person but with different hair, and they both agree they are ‘like a couple that doesn’t have sex anymore.’ But while Frances seems content with an eternally student-like existence, Sophie is not; she moves on with a serious boyfriend.

At this point Frances is cast adrift and should start thinking more seriously about where she wants to end up. However, she lurches from indecision to indecision, moves from flat to flat, spends an impulsive weekend in Paris only to end up lonely and broke, and takes temporary employment at a summer event held by her alma mater, Vassar, which leads to an excruciating reunion with former flatmate, Sophie.

The film does not unfold as a narrative in the conventional sense. Instead it is a series of collected scenes, which are funny, but not necessarily laugh-out-loud funny. It is cheerful and well observed; in fact it is a bit like watching Brecht. Each scene could stand alone, although some are better than others.

Gerwig’s performance is key; she is in every scene and dominates the action. Some might find her insufferable but for the most part her journey is captivating. Where the journey is taking her, however, is vague. Frances’ gawky, strange way of careering through life could be interpreted in one of two ways: it is either a genuine attempt to find herself, following the heartbreak of losing Sophie; or it is a desperate attempt to escape from reality. She is constantly moving, forward, backwards and side-to-side, but her movements are always a little scruffy and unfinished – perhaps this is best symbolised when the ‘Ha’ in the title is finally explained.

And it is precisely because of this incompletion that the film’s purpose is difficult to pin down – a bit like Frances, really – and one leaves the cinema with the distinct feeling that her journey is most definitely not complete. Put simply, those who are charmed by Gerwig and her engaging way of making a mess of things will love this film; those who are not will find little in which to be interested.

Praying the Truth: Deepening Your Friendship with God through Honest Prayer