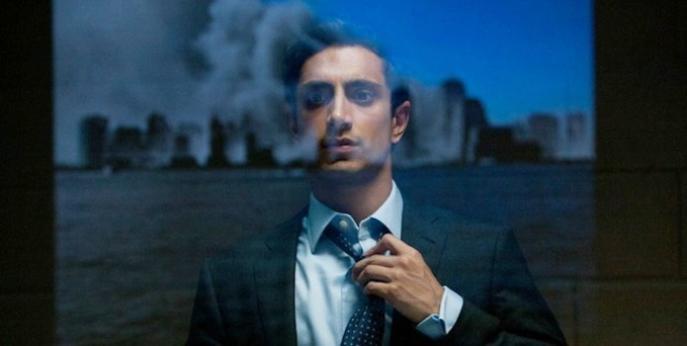 
Mohsin Hamid’s 2007 book, The Reluctant Fundamentalist, has been widely recognised as a subtle and emotionally compelling treatment of the greatest impasse of the age, the tense agony that binds the destinies of the Western and Islamic worlds. The novel takes the form of a monologue in which a young Pakistani, Changez Khan (the thinly disguised Urdu equivalent of ‘Genghis’, a nice hint at an old terror from the East, and interesting in French too), ingratiates himself (his intent ambiguous) with an American as he takes tea in a Lahore cafe. The American (tourist or security agent? we never quite know) is neither seen nor described, nor is the context of their encounter explained; all we ever come to know of the foreigner is relayed through the reactions of the main protagonist who observes his silent companion’s every twitch with a solicitude that borders on the sinister.

Of Changez, in contrast, we know everything he chooses to tell us. Which is a great deal, for the book is essentially an apologia for his short life and, in particular, for his transformation from up-and-coming business analyst in the cut-and-thrust of a New York firm to passionate ideological opponent of American influence in his home country. The obvious point of this monological form is to remind us that the boot is usually on the other foot: by and large, westerners self-narrate, occasionally alluding to Muslim experience as a mere sideshow. It is only having managed, for once, to get a literary word in edgeways that Changez is at liberty to explain the dynamics of his own changing at his own pace and without being forced into unidimensionality.

In a rare example of Indian-Pakistani co-operation, Indian film director (and Loreto Convent alumna!) Mira Nair has now made the novel, into a wonderfully engaging, compassionate and seductive film. Turning monologue into movie is no easy matter and so, with the help of the novelist himself, the film has had to supply its own scenario for the long conversation, opting for the thriller genre in the shape of a dramatic terrorist kidnapping.

In some respects this is unfortunate. Changez (played superbly by Riz Ahmed, of The Road to Guantanamo and Four Lions fame), who, in the novel had been master of the situation and the only one who knew where the encounter was ultimately heading, is now on the defensive as he is interrogated by the brooding American. The air of menace, sustained so brilliantly right up to the final page, is missing from the film which, at a stroke, has made itself vulnerable to a rather more flimsy denouement: the revelation of whether Changez is really a good guy or whether he has fallen in with the nasty extremists. This is just the kind of opposition the novel successfully dissolved and it was all the more subversive for doing so.

Having said that, the medium of film allows the visual dimension to strengthen the hand of the reluctant fundamentalist. The fine cityscapes of New York, Lahore and Istanbul allow the eye to linger on two very different notions of what the urban environment should be about. Key moments of the drama take place in a Manhattan skyscraper from which the insiders literally look down on the outside world. The arrogance of glass and steel offers a strict counterpoint to the roaming arches of Hagia Sophia, the monumental Byzantine Cathedral-turned-mosque-turned-museum which dominates the skyline of Istanbul, drawing the eye ever upwards. A huge burden is carried by the score, too. A vibrant qawwal accompanies the opening credits in which the violent kidnapping takes place. The air is charged as the scene cuts between the kidnapping and the chant. Is the song masking the cries of the victim or is it even propelling the abduction? The director says that it was music that kept her going during production and you can sense that in the raw energy of its east-meets-west sonorities.

At the simplest level, the film tells a story of love gone sour. Changez, a totally secularised Muslim (he drinks and doesn’t pray) falls for the opportunities America has to offer him, quickly rising up the ranks of his elite consultancy firm as well as getting involved with Erica (Kate Hudson), a troubled artist still trying to get over the death of her long-time boyfriend. It’s only when these two pillars of his American dream crumble that disillusionment sets in. Changez finds himself, inevitably in the wake of 9/11, the object of suspicion, and his Pakistani identity comes to the fore in a way that surprises him. This primary narrative is a necessary reminder that the sourness of much anti-western radicalism is not about the revulsion traditional religion feels for permissiveness and materialism so much as disappointment with a civilisation that doesn’t live up to its own ideals.

Significantly, puzzlingly even, there is no overt turn to Islam here, unless you count the growing of a beard. Changez’s radical sensibility is political, anti-colonial rather than religious in nature. Something in me wonders if Nair was too frightened to confront the question of Islamism head-on. It certainly raises the tricky question of what now makes Changez a fundamentalist, reluctant or otherwise. An explanation of sorts is offered at one point but I am afraid I didn’t quite buy it.

Beneath this story, though, is a more penetrating exploration of how certain kinds of passionate encounter with the other can disfigure those involved. Some will find it facile to equate the instrumentalist logic of red-in-tooth-and-claw capitalism with that of ideologically-motivated terrorism. Both, as the film attests, thrive on the destruction of the lives and livelihoods of those whose faces are unseen. But the opposite, the tryst of exotic alterities, proves to be just as destructive and more poisonously so. Changez’s professional and emotional ‘commitments’ are forged in ignorant infatuation, consummated in the total absence of any notion of who he really is. In his invincible shallowness, he is no more able to confront the havoc wrought by the casual exercise of his ‘profession’ than he is to deal adequately with a romantic relationship in which he is at once willing to be a stand-in for the dead Chris (“Pretend I’m him!”) and yet mortified at becoming the subject of his girlfriend’s far-fetched art installation. The perils of premature intimacy, the collapse of boundaries, uncertainty about belonging, these are the great contemporary themes and Nair’s film takes us way beyond clichés and does so with respect and tenderness.

What hope does all this hold out? At times the film teases us with the charming thought that in a globalised world we are all outsiders and that in such a world, we can count on the visceral connection that binds outsiders to one another. But it is a tease. Changez’s gay boss avers that he knows how Changez feels as an outsider but then fails utterly to grasp what really motivates his young protégé. Meanwhile, Changez and his American interlocutor lurch from unexpected empathy to predictable suspicion and back again before the latter ends up holding a loaded gun to the former’s head. Empathy fails every time.

Instead, the film offers a rather conservative message. To a modern world in which we imagine we can create our own identities ex nihilo, the film advises us to come to terms with what birth has made us. If we are quick to grasp at physical intimacy, mistaking it for true communion, we are reminded that real closeness takes time and effort. And if we fondly imagine that difference can be tamed by being ‘managed’ or ‘celebrated’, The Reluctant Fundamentalist insists that it actually demands the painstaking work of dialogue and translation. The closing scene is a fine, poetic eulogy, spoken entirely in Urdu. Perhaps the clue is there.

Sorry, no trailer is available for this film

Sex and the City

Forging the soul: ‘Iñigo’ at the White Bear Theatre