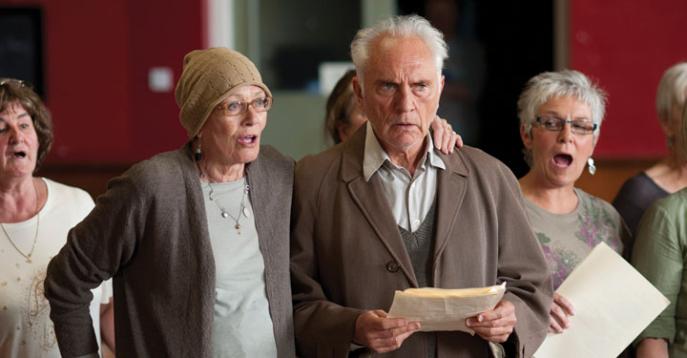 
Why is it that every time Thinking Faith asks me to review a movie, it inevitably turns out to be a heart-warming tear-jerker and I walk out of the cinema with my faith restored? If I had to guess, I’d say somebody up there is conspiring to soften me up a bit. Song for Marion will do that for you, if you’re not careful.

Terence Stamp is Arthur, a crotchety but lovable old grouch who can only stand by and watch as cancer gradually gets the better of his darling wife, Marion. After last-ditch chemotherapy is ruled out, it dawns on everyone that she is definitely in the departure lounge awaiting life’s final journey. But the irrepressible Marion, played by Vanessa Redgrave, is not one for moping around. She opts for a more humanising course of treatment – singing her heart out. To the great displeasure of her husband, Marion devotes what little energy she has left to Britain’s quirkiest and surprisingly gangsta pensioner choir, OAPZ.

From this point on, the viewer knows where this death and resurrection story is going and there are no surprises; Marion dies and Arthur eventually comes back to life. The script resists taking any scenic detours en route to Arthur’s rejuvenation. You could say that the storyline’s simplicity reflects the fact that when we come face to face with life’s brevity, our priorities do tend to boil down to a few simple things. The penny starts to drop for Arthur but the peace and happiness band doesn’t begin to play right away. You see, it can be genuinely difficult to act on your innermost intuitions: appreciating those around you, saying sorry when you’ve done wrong, disregarding what others might think and generally giving life a good crack of the whip. Song for Marion places you alongside Arthur as he negotiates a few interior roadblocks and familiarises himself again with life’s essentials.

Help comes in the form of his son, James (Christopher Eccleston) and the OAPZ choir mistress, Elizabeth (Gemma Arterton). The intimacy and emotional honesty between the lead quartet really draws you in. It’s not just the acting, in fact, but the whole production that steers away from any hint of artistic posturing. This leaves the film open to one line of criticism and as I exited the cinema, I duly overheard somebody complaining that the script was a tad one-dimensional. Point taken; it could go further by exploring a few more alleyways. But I will be generous and say that this film chooses deliberately not to deviate from its course. It is a 90 minute detox from social pretence that doesn’t hesitate to relieve you of all your reluctance to live a little.

In the pre-show interview, writer and director Paul Williams revealed that he drew inspiration from his grandparents who had stuck by one another through thick and thin. His unaffected style has done justice to a golden generation who enjoyed life in all its goodness and simplicity and remembered not to sweat the small stuff. Amen to that!