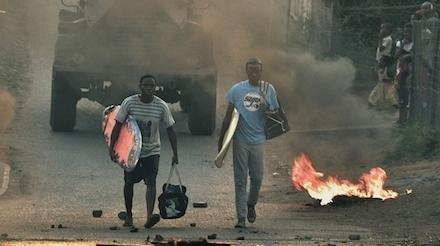 
What most captured my attention as I sat at the London premiere of Otelo Burning was the way in which director, Sara Blecher was capable of telling such a harrowing and physically violent story without portraying too graphic and brutal a story on screen. We are so accustomed to the Hollywood mise-en-scène, with its gratuitous insertion of blood and disturbing graphic content, that we have come to expect this to be intrinsic to the cinematic medium and a necessary feature of visual story-telling. So, it is surprising that Blecher and her team chose deliberately not to force our picture of what happened during some of the most disturbing and violent years in the modern period: Apartheid. The film deliberately tones down the political narrative of the time but does not negate it any way, as is evidenced by the geographical and temporal setting: Lamontville, between 1989 and 1990, around the time of Mr Nelson Mandela’s release from the infamous Victor Verster prison. Lamontville is the oldest black township in Durban and was a centre of much unrest and violence during the struggle, especially between the minority political parties of the time: the African National Congress, Inkatha Freedom Party and United Democratic Front. The film focuses on telling human stories, the ordinary moments that would have been encountered whether the characters had been embroiled in the Apartheid era or not. In so doing, it perhaps seeks to equalise the lives of black people with those of the more privileged whites, to put paid to the all too prevalent signs, ‘slegs blankes’ (‘whites only’). It portrays the situation from a previously unthought-of angle and rightly fixates the viewers’ attention on what it sees to be the worst injustice of Apartheid. In this way, I think, it seeks to redress the wrong that perhaps inevitably takes place when human atrocities become an object of study: individuals collapse into a generalised statistical mound, and names and stories are pooled to meet the desire of affording a ‘general picture’; all this at the expense of personal identities and dignities.

There is no better way to show a people’s humanity – at its worst, best and most tragic – than through tales of love. Otelo Burning is no exception. Love is displayed in its many varieties: the love between brothers (Otelo and Ntwe); the love of friends (Otelo, New Year and Mandla); the love of a parent (Otelo, Ntwe and their father Oscar); and the love of lovers (Otelo and Dezi). In each there is curse and blessing, and the film explores these at depth. These sub-narratives are explored with such richness that they would each befit a film on their own, a point alluded to by the director in an interview following the screening. For this reason, she needed a way of knitting the story together. The treatment decided upon by screenwriters James Whyle and Sara Blecher was to insert the loose stories into one overarching narrative that was cohesive and familiar to a wide audience, that of Shakespeare’s Othello. I think this was both cunning and apt as it afforded the story the coherence it needed and linked together seamlessly the themes of love, racism, tragedy and betrayal already evidenced through the individual stories... no points for guessing why the characters acquired the names they did.

The actors are superb and hold their own against their international and better-known counterparts. It is difficult to single out the best performance, though the chief protagonists offer particularly convincing performances: Otelo, played by Jafta Mamabolo, a well-known South African actor; and Mandla, played by Sihle Xaba, a champion body-boarder upon whose real life experience much of the story rests. It would be unjust not to mention the accomplished and haunting performances of Thomas Gumede (New Year), Tshepang Mohlomi (Ntwe) and Nolwazi Shange (Dezi). The cinematography is equally enthralling, shot mostly on handheld cameras to preserve the gritty reality of the time.

The film is not only about relationships between people. It is also a poignant exploration of the relationship that one has to oneself. This is explored through the relationship that each person has to water: the fear of the ‘snake’ that lurks in the liquid mass, and the inescapable urge one has to jump in and challenge the perceived fate and discover the reality for oneself, a metaphor that is pervasive throughout. This is also the box-office appeal of the film – the breathtaking beauty of South African beaches. The director describes the film as akin in part to Blue Rush. Nonetheless, the film also seems to be a vehicle to challenge conventions and to chart new territory. To see a black man competing in and winning a surfing competition – a sport that, in South Africa at least, is typically that of whites – is extraordinary; but as is uttered in the film, this is ‘what people mean when they talk about freedom.’

At its heart, the film explores freedom – of the individual, the community, the system – and the price that one is prepared to pay to taste this freedom, exemplified by the surfer as he glides across the African sunset on the perfect wave. It is this imagination, the ability to see beyond what is tangible on the streets, that drives the protagonists and allows them the freedom that they seek in the unfair and oppressive system which Apartheid imposes on them. This is also a potent reminder for South Africans who still today try to bring about the ‘New South Africa’ and to all those who continue to strive for freedom the world over. Picture this: three black boys at the tail-end of Apartheid, surfing. This is by no means a conventional picture. Nevertheless, it is the leitmotif of the film. It is highly recommended.

No Country for Old Men

The next world crisis?