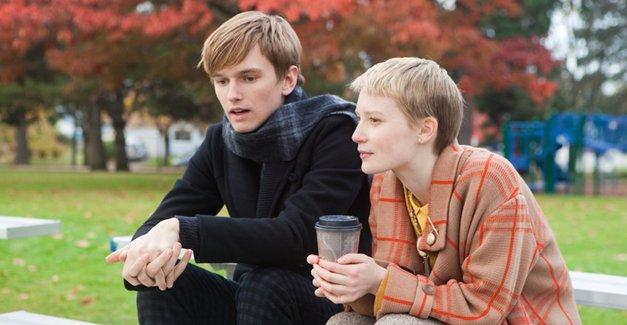 
The posters for a very popular London musical are currently declaiming: ‘You already know you are going to like it!’ Such assertions, with more than a hint of nervous luvvy desperation, are more likely to have us looking for reasons to dislike. This was indeed my feeling upon reading that Restless is ‘an affecting and delicate teen romance’, a doomed affair in which Annabelle (Mia Wasikowska) has been diagnosed with cancer with only three months to live. It’s a version of Love Story for the twenty-first century, and true to the genre leaves no heart-string unplucked. Annabelle’s star-crossed lover, Enoch (played by Henry Hopper), first encounters her at a funeral; he is into ‘gatecrashing’ the family funerals of total strangers, a habit which may or may not have something to do with the tragic deaths of his parents in a car crash.

As it turns out, both protagonists are ‘half in love with easeful death’; the difference being that for Annabelle death is a real and imminent prospect, so that her playacting is somehow given license in a way which is denied the melancholic Enoch. There is a revealing scene in which they are acting out her demise, she swooning into his arms, only for her to express annoyance when he makes as if to kill himself, Romeo-style (more precisely, ritual disemboweling, for reasons to be explained). She is miffed that her grand exit is being upstaged, and they quarrel- recognising, perhaps the self-indulgent futility of their little play.

This is, after all, the engine of the romance: how to keep death at bay, how to make terms with it in ways that are not clichéd, even as they come to think that love and death go together even better than love and marriage. Annabelle plans her funeral, envisaging tables groaning with junk food ‘since grieving people only want to eat anyway’. She idolises Charles Darwin, because his science confirms the total insignificance of the individual human being.

Much of this is painting by numbers, in ways that that seem to carry more than a few echoes of the 70s, and not just Love Story. The advertising blurb refers us to the ‘gothic whimsy’ of Harold and Maud (1971). The Californian soundtrack, and Hopper’s moody withdrawal, seemed to me a citation of Hoffman in The Graduate (though there is little trace in Hopper’s performance of the menace we associate with his father). The wan, bubbly, elfin Annabelle looks uncannily like Mia Farrow as Peter Pan; Mia Wasikowska is enchanting, and manages to chide the inadequate adults, much as she did as Alice in Tim Burton’s version of Wonderland. Both the main leads attain moments of haunting conviction.

Whether this is enough to satisfy is another question. The film sags horribly in the middle, where clearly it was felt the action needed livening up with a couple of fresh plot lines. In a shouting match with his aunt, Enoch blames her, quite irrationally (and unconvincingly) for his parents’ death. Thankfully, this theme peters out immediately. Similarly, there is a moment of threat at a Halloween party where Enoch has to escape from a nasty-looking gang (he apparently had beaten up one of their number at school, from which he was duly suspended; this revelation similarly goes nowhere as far as the plot is concerned).

More serious, perhaps is a certain laziness with regard to the overall theme: death, and what to make of it. It turns out that Enoch has a ghost friend, who attached himself to Enoch when the latter had a near-death experience during the parricidal car crash. The ghost is a kamikaze pilot, Hiroshi (Ryo Kase), and while the friendship itself is moving played, this must be the worst case of Japanese stereotyping since Mickey Rooney’s appearance in Breakfast at Tiffany’s. Hiroshi still wears his Japanese airman’s uniform, he likes to play battleships, he explains to Enoch the details of ritual disemboweling, and he gets upset when someone carelessly jokes about Nagasaki. Hiroshi’s version of a death heroically and willingly embraced for a greater cause (would this have worked if he had been a Nazi?) offers a counter-riff to Annabelle’s long journey into night, but it is not subtle.

As Annabelle nears the end, she herself now sees the previously invisible Hiroshi – no longer in military dress, but in vaudeville top hat and tails (still not to be taken too seriously, in other words). He has come to accompany her on what is going to be a long journey. And therein lies the rub, as Hamlet pointed out. A long journey to where? What’s it like, and is there anyone else there? Why wasn’t Hiroshi reunited with his own beloved – or is it the case that love is not, after all, stronger than death?

The ghost motif, in the end, shows how Restless tries to have its cake and eat it. Death’s chilling, brutal capacity to isolate, to deform and scar individuals, is the looming backdrop to the tender affair between Enoch and Annabelle; but its sheer nihilism is kept at bay by the presence of a friendly ghost, who reassures about what lies beyond without giving anything away. I remain puzzled by the title, wondering if there is an ever so remote reference to Augustine: ‘our hearts are restless, till they rest in Thee’. More likely, the restlessness is in the minds of the producers, who were not quite sure how to play this, and have ended up with a perfectly charming but rather lightweight film.

Science and Spirituality: Making Room for Faith in the Age of Science

Catholics Writing the Nation in Early Modern Britain and Ireland