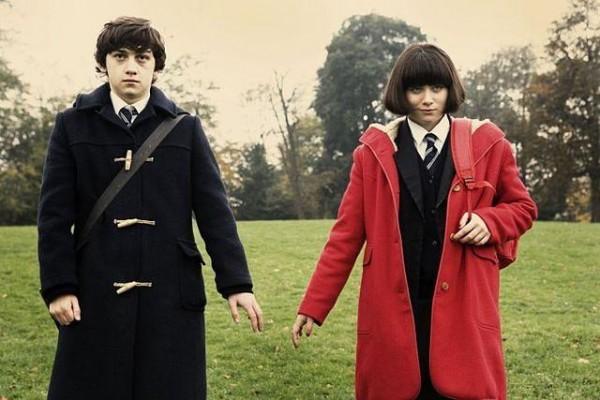 
Given the advertising, which focuses on the image of a staring schoolboy in a duffle-jacket, you would be unlikely to go to Submarine expecting it to be about naval warfare. You might then wonder why a study of teenage angst in a small town on the west Wales coast is so titled. The key to this is to realise that submarine is an adjective not a noun, and one of a number of (occasionally confusing) metaphors about life that run through the film. It’s called ‘Submarine’ because the idea is that during periods of depression, young Oliver Tate – just like his father the marine biologist – lives life as though from the bottom of the ocean.

Another of the interweaving extended metaphors is film and its language. Oliver is a well-informed fifteen-year old who understands some of the complexities and economics of the film industry (as was no doubt Joe Dunthorn, author of the novel). In the opening stages of the film, he narrates that moment that all self-obsessed, morbid and depressive teenagers have wallowed-in – the visualisation of one’s own funeral. Oliver’s would be filmed and televised, and ideally end with a dolly shot that develops into a swooping crane shot. ‘But’ the narrator notes ‘unless things improve, the biopic of my life will only have the budget for a zoom-out’. And the camera duly zooms-out. Like I said, he is a sophisticated fifteen-year old.

Other nice moments for cineastes include some very interesting editing in the first half hour, which use jump-cuts, cross-cuts and montage to communicate something of the madness of adolescent self-obsession. There is also a nice use of simulated ‘super-8’ home movie making to capture his two weeks of love with fellow misfit, Jordana Bevan. Though this does go on for slightly longer than is entirely necessary. This use of super-8 is also an element in a not-altogether convincing recreation of the past (I’m not clear what decade: the home-movies suggest the seventies, one character’s mullet suggests the eighties, but the rest of the costumes and set details don’t firmly place it anywhere other than ‘not now’).

However, the bulk of the piece hangs less on formal effect than on character-driven performances which – though they occasionally reference Mike Leigh – don’t really get to the heart of the emotions of the people concerned: this is a problem, because the theme is emotional, but the treatment avoids emotions, often preferring to make some slight filmic reference in an apparent attempt to shrug off the seriousness of the material. I spotted homages to A Bout De Souffle and (more bizarrely) Don’t Look Now, no doubt there were others. But these are done with such throw-away and casual emphasis that all they succeed in doing is distracting us (‘was that really a reference to Don’t Look Now? It was, there it is again. What on earth was that doing there?’) and so diffuse the power of the central insights of the screenplay. These are worth repeating: our sexual experiences in adolescence stay with us for the whole of our lives; our parents’ mental health forms the basis of our own. Depression, like other elements of our personality (the shape of our noses, a taste for spicy food) is an heirloom that can be passed from one generation to another.

Unfortunately, these insights are lost in a production that reeks of clichés: Oliver Tate reads Catcher in the Rye and Nietzsche (don’t all depressed teenagers?), and his misfit quasi-intellectual character draws heavily on Adrian Mole. His mother could be any one of a number of Alison Steadman parts, and his father is little more than a comedy Open University Lecturer out of central casting – the narration seems to suggest he is the Open University Lecturer, the one with long hair, a kipper tie and wipe-clean drip-dry shirts. Except it’s just not that funny, really – everyone had a good laugh at the brown ties and the yellow shirts back in 1985 and got over it back then.

As a portrayal of adolescence, I found this interesting but not engaging. It does not compare well with Napoleon Dynamite (2004) for a toe-curling study of the social outcast, or Juno (2007) as an exploration of teenage sexuality and its consequences. In British cinema, this material has been well-covered in numerous films: consider Bill Forsyth’s Gregory’s Girl (1981) or Michael Apted and Jack Rosenthal’s P’tang Pang Kipperbang, (1983) or other works in that same First Loves season of films commissioned by Channel 4 in its first year, many of which explore exactly the same combination of first love and parental breakdown.

It’s not an accident that three of those references come from the early eighties, when representations and experiences of love and desire were searing themselves onto this reviewer’s imagination. As Oliver comments at one point, what happens in that period of our lives is caught on the film of memory and we can spend years later ‘revisiting the same handful of images’.

For contemporary teenagers, there is a more troubling element to this. Abusive representations of sexuality are proliferating, and pumped out through the internet by commercial and criminal interests. These images are consumed by teenagers right now, swapped and shared through technologies their parents and teachers barely understand and burning themselves into young people’s imaginations right at the time that their sexualities are developing. Stand-by for very different rites-of-passage films in the next decade. Such cinema will be more troubling than this petit histoire, but maybe then we might be able to move on from Adrian Mole and Holden Caulfield.

The Embryology Bill: What is at stake?