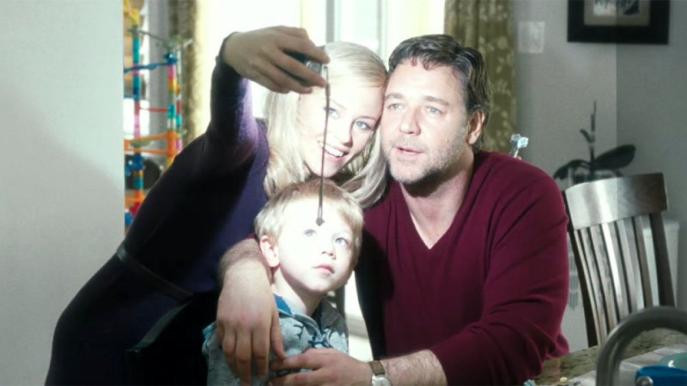 
Back in June of 2009, this journal reviewed the French thriller, Anything for Her: the film was a ripping, action-packed(and basically unbelievable) crime-drama about a literature teacher who takes to extreme measures in an attempt to liberate his (apparently) unjustly-convicted wife from gaol. In Fred Cavayé’s film the teacher was a determined, practical man, who got entangled in the dark world of Paris’ banlieue, of illegal immigrants, forged passports, drug deals and messy deaths. This is the milieu of the legendary, appallingly shocking Irréversible.

Anything for Her has recently been remade for English language audiences as The Next Three Days by Paul Haggis with Russell Crowe in the lead. It is currently on general release, and has been running fifth in the UK box office, having been similarly successful in the USA last autumn.

If you saw the original, Haggis’ version at first seems like a frame-for frame remake: it includes the same homages to Irréversible, with the back-to-front story-telling, and the same references to the violent possibilities of fire-extinguishers. However, it becomes a bit more than just a pedestrian re-make for an audience who can’t read subtitles: Haggis twists the screenplay keeping the interest of those who know the story, and drawing out some of the themes that are of characteristic interest to him, not least disappointment and cynicism.

These two interests were there in Haggis’ screenplay for Quantum of Solace, and In the Valley of Elah for which he was also director. Quantum of Solace was the second of the Bond films to revisit the darker side of the character, and in which an environmentalist philanthropist is exposed as just another capitalist exploiter; In the Valley of Elah was a touching portrayal of a father’s dogged investigation into his son’s death, in which the old man seeks evidence of a conspiracy that it slowly becomes clear simply did not exist. Other reviewers have noted Haggis’ relatively recent departure after thirty years from the Church of Scientology (he rejected their stand on homosexuality) and have suggested that this sense of betrayal and escape underlies his attraction to the break-out movie that is Anything for Her.

A sense of failure and weakness seeps through much of this version: whereas the French teacher-cum-gangster of Anything for Her is rugged, capable, and surprisingly handy with a 9mm automatic pistol, Russell Crowe’s John Brennan is baggy, saggy, and generally rather inept. I hope it adds to the possibilities of tension (rather than giving the game away) to say that whereas in the French film, the plan is well-designed from the start, (and when there are issues, the hero seems remarkably capable of manfully shooting his way out) in the American one, the plan seems cack-handed and to unravel at every stage. All of this allows for a more convincing character development, showing a loving dad gradually growing through failures and mistakes into a competent and effective criminal. It could happen to anyone.

Another interesting variation is the ‘writing-up’ of the possibility that Crowe’s wife (played by Elizabeth Banks) might actually have done it, and not be as innocent as we at first thought. Some viewers might relish this decision to foreground a possibility that was merely an ambiguous inference in the French version, others might find it overdone. In either case, it seems to fit with a director who has lost a degree of moral confidence.

And in that sense, this film is more thought-provoking than the French version, which seemed wilfully to avoid any of the moral doubts and questions. Around about half-way through, Haggis uses a moment filmed in Crowe’s literature class to introduce references to Don Quixote, and from this offer the idea that this whole engrossing project (break my guilty/innocent wife out of gaol, emigrate, leave everything we have ever valued, start a new life) might just be a fantasy, a madman’s confrontation against an imagined enemy, a final moment of insane self-sacrifice against an invented opponent. In addition to these doubts, the Haggis version forces its protagonists to make choices: there is a genuinely dramatic moment late on in the film where Brennan and his wife are forced to choose between freedom and their child, between their roles as parents and their love for each other as man and wife.

There are also some engaging performances by a skilled supporting cast: a striking debut cameo by Aisha Hinds as a junior police officer, and a vibrantly engaging performance by Lennie James (who turns out to be a south Londoner) as the frustrated policemen trying to find Brennan and his wife. On the other hand, there is a very odd moment where the camera lingers just a little too long on an otherwise irrelevant character; a little research unearths that this ‘walk-on, look-serious, and rush-off’ part is played by Sting’s wife, Trudie Styler. It’s a peculiar caesura, producing an effect not unlike product placement in the Bond films.

On the whole, this is a pacey and engaging thriller and an interesting rendition of the original; it will give you a solid Saturday night out if you like twists, tension, the odd car chase—and don’t require a plot to be 90% credible.

Jesus wasn’t killed by the Jews

Racial Justice Sunday: Do I love my neighbour?