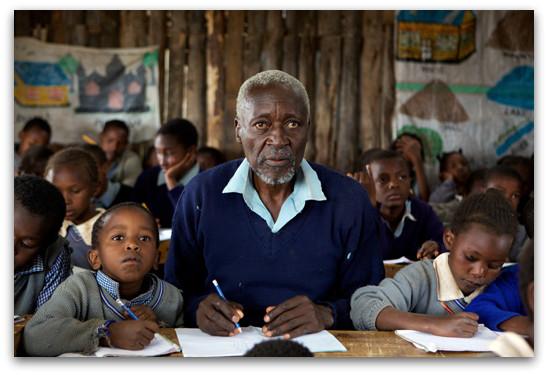 The First Grader is an inspiring film based on the true story of a Kenyan man, Kimani Ng’ang’a Maruge, 84 years of age, a Mau Mau – proud of his tribe and his ancestry. When it was announced on Kenyan radio following the government’s new policy that there would be free education for all, Maruge decided that this was his opportunity to learn to read. The nearest ‘institution’ is a very remote small modest building with not enough chairs and desks for all the primary school children who he would be learning with.

The scenes of hundreds of children and their parents and guardians pushing and shoving with birth certificates in hand to register their child, gave us a glimpse of a country where education is viewed as a privilege and not a right, and that a teacher, a good teacher, could be that person who could change your life forever.

The film has many layers and messages, revealed gradually as the story unfolds. We discover that Maruge’s access to education was not just a right he was denied as a child, but that it is now possible for Kenyans today because of what he and others like him suffered during British colonial rule.

We witness the bond develop between Maruge and teacher Jane (Naomie Harris) when he is eventually able to learn with the young children, amongst much controversy. We see the development of all the characters: teacher Jane who inspires the children and takes on the fight for Maruge to keep his place at the school; teacher Alfred whose angry, icy and unapologetic way in dealing with Maruge later melts into a respect for a man of character and integrity.

There are some beautiful, beautiful moments in this film; a young lame girl who sees Maruge lonely and isolated, struggles to his side and holds his hand to comfort him – a little girl of around 7 years old. As the story develops the children welcome him and begin to listen to his stories, sing his songs, the oral tradition of Africa passing on its heritage to the next generation – under the cotton tree, a tradition which was preserved and taken to the Caribbean with the African slaves, who told stories of home, and the strength of a people, irrespective of the plight they currently found themselves in, a tradition I myself try to preserve.

‘Your pencil is your friend’ and ‘learn until there is soil in your ears’, are some of the lines you’ll remember and start to quote, gems teacher Jane imparts to her students, and when she is forced to transfer to another school because of her support of Maruge, the children show their love for their teacher Jane by an act of solidarity and action, an ability to demonstrate that they will not allow them to replace their teacher – this also shows how that resilience of African people to stand up for what is right is in the blood, even at such a young age.

There are some dark moments in the film; with the use of flashback, director Justin Chadwick shows us snapshots of the British detention camps, the cruelty imposed on the natives in their aim to crush these people who are holding on to their proud heritage and sense of identity which is vividly shown through Maruge’s eyes. This account of Kenya’s recent past is one Chadwick took pains to retell to us all. Perhaps most significantly to the second and third generation Kenyans – some of whom do not know their more contemporary history – to perhaps enlighten rather than simply criticise, so that hopefully we will work together to see that these atrocities do not happen again.

This film of charm and resilience will make you laugh, cry, think and will inspire. This is a must see for young people. However, the irony is that this Kenyan story which highlights a significant time in its history, is told by former colonial masters at the British and earlier the Toronto Film Festivals. Perhaps there is a parallel between this and Barack Obama whose father was Kenyan, who now lives and leads a nation in the White House, a mighty symbol of freedom, which was built in part by slaves.

See this film when it comes out – it’s up there with one of my favourites!

Prayer and discernment in lockdown
Learning to pray in front of the television
Co-creators of a better world
Ecological Conversion and the Spiritual Exercises
Beyond the pandemic: believe everything or deny everything?