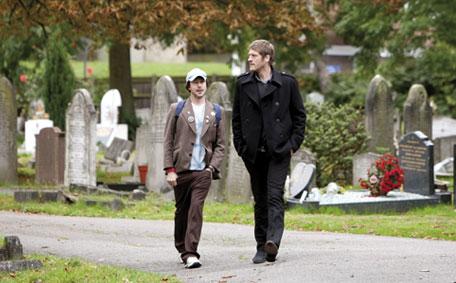 
Treacle Jr. is a rare, almost unique creation in modern mainstream cinema. It is free. But freedom comes at a cost, the cost of the film, which is not free. Writer and director Jamie Thraves took the decision at the idea’s conception to finance the film entirely independently, which is a great risk (his wife remortgaged her house to see its completion). Treacle Jr., then, devoid of all the inputs of a selection of invested parties or corporate interests, stands totally uncompromised as itself. And as such the film does possess an identity somehow that many others lack. It is clearly an artwork in itself rather than a story told or events documented. Its independence gives it coherence and liberty.

More than anything, arguably, Treacle Jr. is an exploration of that certain kind of hardship that finds itself prevalent but often overlooked in the developed western world, and how people deal with it, together or alone. This is explored through the actions of 3 characters, who find themselves together at a certain point in time, with unexplored pasts and uncertain futures.

Tom (Tom Fisher) is a man who has attained a particular vision of a good life; he is seen in the opening scenes sitting with his wife in the sort of welcoming, sunlit open-plan kitchen that a dulux advert would want to eat breakfast in, later talking in hushed tones to his newborn child, then boarding a train from Birmingham New St. to London, where he settles down on a piece of cardboard in a doorway. We find ourselves thinking, ‘Wait. Why isn’t he happy?’ and then realising that of course, he must not be necessarily happy because his life has become a particular archetype of success and contentment. We all know it is rarely that simple, but we often need reminding.

We follow Tom through his formative experiences of homelessness until they lead him and us to Accident and Emergency at our very own King’s College Hospital London, where he encounters Aidan (Aidan Gillen, The Wire) one of life’s wildcards. Aidan is first portrayed as an annoyance, as a jabbering gnat hovering about Tom’s ears. Tom however, being chronically passive (which later emerges as one of the contributors to his breakdown), cannot bring himself to tell Aidan so. This results in one of the film’s comic scenes, as Tom half-heartedly runs through a graveyard to try to escape the oblivious Aidan.

As the two are drawn together through a few chance encounters, we see more of Aidan’s life, and Tom’s empathy for him develops into a friendship. Aidan was what he describes, with comic hanging and strangling action, as a ‘blue baby’ (a baby who was born with the umbilical cord around his neck). He was given up by his parents because, as he puts it, ‘they thought [he] might turn out all like [insert nonsensical sounds here], but [he] just turned out fine.’ Aidan remains irrepressibly optimistic and upbeat in spite of repeated abuse and continual rejection, a whole lifetime’s worth in all likelihood. He is endlessly affectionate and empathetic, he is, in a sense, something of a saint. He survives on a fantasy of fame, with its mantra being ‘All sorts of people come out of the woodwork when you’re famous. All sorts of people.’ This refers directly to those who have rejected him overtly, like his parents, his ‘girlfriend’ Linda (Riann Steele) but also to the opportunities he sees in it and his route to a degree of happiness. The totem of his philosophy is a drum kit. It stands waiting in a music shop which he frequently visits to looks at it, play it and tell the shopkeeper to keep it for him. It is his route to fame, to acceptance, to happiness, and, as he puts it, to heaven.

The setting gives the film a unique reality also. Thraves chose to shoot everything on location in South London, and the places filmed often take a prominent part in scenes. Aidan takes Tom out to the Horniman museum for a special treat, which is itself a beautifully strange backdrop for their unguarded conversations.

In Treacle Jr. Thraves explores the relationship between freedom and escape, that they are not quite the same thing. Freedom can be just as well attained through a choice to remain than to break away, and all one needs to do to achieve freedom sometimes is to realise that one was already free. This represents a part of Tom’s journey in the film. Aidan’s relationship with freedom is entirely different though, as his liberation comes, at last and well deserved, through escapism. Through moments experienced where reality shrinks away one is wholly engrossed in the beauty of action, which Aidan calls heaven. Tom initially says to Aidan that he doesn’t believe in heaven, which Aidan cannot comprehend, as he has seen it and has been there. In Treacle Jr., the development of Tom and Aidan from hopelessness to the opposite, through rites of passage, human connection and making sense of the senseless is portrayed beautifully, intelligently and sensitively. The characters are written and performed with great subtlety and are easily empathised with. It is a real human story told honestly.

Good And Bad Power: The Ideals and Betrayals of Government

Where the Wild Things Are

Before the Devil Knows You're Dead