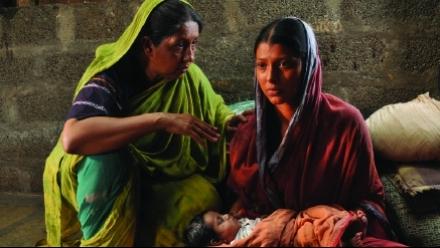 
Whether your expectations have been heightened by the success of Bollywood blockbusters with melodrama, romance, colour, singing and dancing, or the cross over to mainstream Hollywood with Oscar winning films such as Slumdog Millionaire, I am Sindhutai Sapkal attempts to invite the viewer into the culture and reality of a woman living in poor rural India, and for us not just to be eyewitnesses to what she and many like her face, but to understand the real continued plight of certain groups in society in countries whose current political and economic development tries to tell a different story. This is a good effort but for me falls slightly short of the mark.

The film attempts to tackle some cultural taboos; arranged marriages of girls as young as 12, the plight of Indian women, education for girls, the caste system and more, and any criticism of what is accepted as conventional norms would be controversial for audiences in Mumbai.

Mahadevan tries to start a ‘holy myth’ about this woman, who incidentally still lives, portraying her as almost perfect, which may go against a western perspective where we are more cynical or suspicious about our idols, those who are claimed to be saints.

Western film audiences prefer their heroes or heroines to have flaws; their infallibility, their imperfections helps us to admire their accomplishments as we relate their struggles and imperfections to our own.

We are taken on a journey with a young girl, whose future is already mapped out; tending cattle, fighting to get an education, being married off to someone old enough to be her grandfather, raising boys, cooking and cleaning for her family and living under the dominance of men in her home and in society. Our protagonist enters our world as an elderly woman who is travelling on a plane from India to America to give a talk. She appears as though she has never flown before and in striking up a conversation with a businessman in the seat beside her, her life story unfolds in a series of flashbacks, which Mahadevan uses a little too liberally, and in a couple of instances unnecessarily.

The struggle to be educated is her reality; herding the cattle taking them to be watered, parking them in a safe spot whilst she rushes to school, retrieving her school slate from its hiding place, to only be threatened with expulsion for always being late, without any sympathy from her educators for how much of a struggle this young girl experiences to get what she believes is her right. This is our first view of the male perspective in this film, the lack of appreciation of how badly she wants to learn, the attitude that it doesn’t matter about her education because she is a girl. Shouts are heard so she rushes to find her cattle in a farmer’s field, our second look at the male attitudes in this story. The farmer is so angry he strikes her across her face and orders her to remove the animals immediately. She stands there accepting her lot fighting back the tears and whilst you start to get a feel for how her life will unfold, you also see her strength, even though at this stage she is but a child.

Her mother should be the one who fights for her rights, the one to protect her, but you see another side to ‘unconditional love’ and another face of the strength of women, an ugly face as she turns her back on her daughter when she needs her most. However, she and her father have a special relationship, and whilst he lived, he tried to go against the cultural norms and to allow her to pursue her educational ambitions, she loved to read. But her destiny to marry at 12 years old could never be altered, and at the pre marriage ceremonies you see a glimpse of the caste barriers, which have mostly broken down in large cities, though they persist in rural areas of the country. The Indian Constitution has outlawed caste-based discrimination, but it continues to survive in modern India because of a combination of political factors and social perceptions and behaviour, and this is seen in the film.

Following her marriage and move to live with her husband’s family, you get yet another insight into strong Indian women – the mother-in-law. She is not her ally but her jailor, and rules that home with a similar rod of iron, as did her mother, and criticises all that Sindhutai does. The inevitable first union between ‘a child’ and her husband is dramatically portrayed and leaves you with a continued lack of understanding of how this can still go on today in India. Her treatment by her husband ranges from indifference to mild cruelty, but when accused of sleeping with his brother, Sindhutai is cast out of her home, pregnant and scared, and she gives birth alone and on more than one occasion contemplates suicide. Rejected by her own mother, she finds herself in a village where a woman who has lost her child and whose grief stricken mind thinks Sindhutai is her daughter, takes her in and places her under lock and key and when confronted with the truth, dramatically dies, leaving our heroine destitute again with baby girl in arms.

During her time surviving on the streets, she meets other children and without much herself, feeds them with what little she has, and starts her journey to eventually setting up five orphanages for abandoned children. We are introduced to intense poverty, unaccompanied children especially girls and ‘imperfect’ boys on the streets disturbingly vulnerable.

She stands up for what is right to officials and others, mainly men, who wield the power at that time, and becomes a champion for the unheard, with women and children following her on her travels. From her humble beginnings and quiet strength, it is hard to see how she makes that leap, but I suspect this is more to do with Mahadevan’s gaps in showing us the character development of our heroine.

How authentic is the story, how close to reality was the director’s account of the heroin’s truth? Talking to us after the preview, he told us that not only was he apprehensive at our reaction to the film but he’d recently experienced that same apprehension when this was shown to Sindhutai Sapkal for the first time. Keeping the authentic dialogue in Marathi rather than Urdu, (with English sub-titles) is realistic, but I’m not convinced this story which attempts to depict deep humanism in the face of injustice and humiliation, will cross over successfully to mainstream cinema, either here or in India.