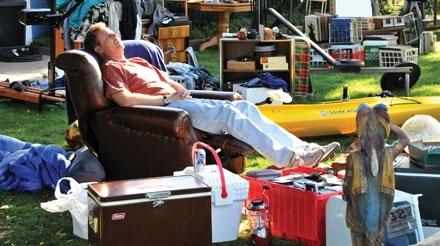 
The fiction writer Raymond Carver’s epochal collection of short stories What We Talk About When We Talk About Love begins with a beautiful offering called Why Don’t We Dance. This brief yet affecting story provides the framework for Rush’s first directorial debut and describes the meeting between a young woman and a middle-aged man who has been drinking heavily. He is surrounded by all his possessions and we are treated to an insight into this most intimate human moment. Rush himself said that Carver’s story had been lodged in his mind since he read it some while ago. This is not surprising considering the quality of the story itself. But it is, I think, some feat considering he has created a full-length film around this short piece of writing, let alone one that is true to Carver’s unique sense of American miserablism.

Nicholas Halsey, played by Will Ferrell, is in the depths of a ‘bad day’. Having recently been fired from his long-term job in marketing, suffering at the hands of his own addiction, he returns home to find his locks changed, his wife gone and his possessions scattered all over his own front lawn. Tough one. And despite his generous nature and gregarious humor he has fallen victim to his dependence upon alcohol which bar his 2 remaining ‘friends’, Detective Frank Garcia (Michael Pena) and 11- year old Kenny Loftus (Christopher Jordan Wallace), is now his only real dependent. Detective Frank Garcia, his alcoholics anonymous sponsor, arrives at a relapsed Halsey’s house late at night to tell him he can buy him some time but after a few days he must move as the US law states a porch sale cannot exceed 5 days.

Over the passing days we watch as Halsey boldly decides to sell his belongings to the people in his neighborhood. He has no grand plan. He is living day-to-day using the money he has made to pay for his beer and the wages of chubby 11- year old Kenny Loftus. Halsey recruits disaffected Loftus to work for him because he feels a bit sorry for him. Halsey promises he will pay him the minimum wage and will ‘grant him cigarette breaks’ as ‘required by U.S law’. Kenny doesn’t smoke but agrees to working for him providing he teaches him how to play baseball. Over the course of the following days we get to witness some of Halsey’s realisations regarding his own life as well as other people’s (notably his next door neighbour’s penchant for sadomasochism and red wine). Then there are the comedic moments of suburban parochialism, which punctuate Rush’s portrait of Middle America. Halsey makes his first sale which turns out to be half a bottle of mouthwash to an eccentric old man in his neighborhood. Ferrell really comes into his own here as he creates some utterly sidesplitting moments without trivializing Halsey’s situation one iota.

Ferrell exploits his comedic skills giving Halsey a sense of pathos other actors might not have done. We do not blame him for his circumstances. How can we? How can we blame someone for buckling under the pressures that other people operate normally under? As Halsey himself says; what even is ‘normal.’ No one in the film is ‘normal.’ Even in suburban America where ‘family values’ and the nuclear family are lauded as some kind of prize; some bastion of success, Rush, like Carver, reveals that this is certainly not the case. Kenny, the 11-year old boy, is bullied and lies over playing sports; his next-door neighbour has some fairly left of centre sexual preferences. And even the supposedly secure marriage between the kind, pregnant primary teacher Samantha (Rebecca Hall) and her husband who like Halsey is revealed to be a pretence and façade. But for what?

And still the film is not suggesting that all is lost. Far from it. There is no real moral lesson to be learnt and no moral judgments to be cast. Perhaps he will sober up and perhaps he won’t. Rush said he wanted the audience to bring their own experiences to the film and it’s ending. We are just like the characters in Carver’s and Rush’s story. There is no real justice in this world. In this world of Rush and Carver’s people must somehow learn to cope with the situations they find themselves. That is all they, and we, can do.

Theology in the Context of Science