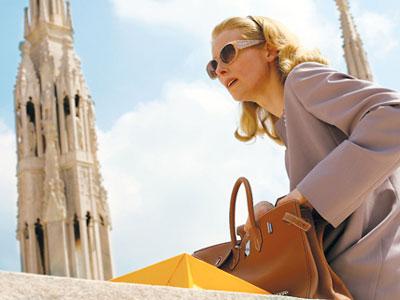 
In 1995, Tilda Swinton spent a week in a box in the Serpentine Gallery. Visitors to the exhibition were presented with the actress, apparently asleep, in a seemingly sealed Perspex box. The piece might have raised questions in the minds of viewers about the boundaries between the personal and the public, between life and performance, about the status of the body in art.

There is something about Swinton’s physicality that demands and commands our gaze: earlier in her film career, Derek Jarman often used her striking (and largely silent) presence to create attitudes and atmospheres, in, for example, The Garden (1990)and War Requiem, (1989). In I Am Love, she is presented to us in another box, this time the very stylish silk-lined, marble and ormolu one of an Italian bourgeois marriage. Swinton’s body, sheathed in snappily tailored one-piece dresses (only the colour seems to change, the style is always the same, creating a slightly chilling sense of control) glides with poise and elegance through the stiflingly ordered setting of her family and marriage. Everything is perfect in this world, all flowers neat, all dresses pressed, all seats at dinner carefully considered, all food perfect, until all the rules are broken in an affair with a skilled and creative chef.

So one reading of this film might cast it as a pretty straight-forward romantic fantasy: pent-up bourgeoise, Emma Recchi (Swinton), meets creative genius and maker of orgasm-inducing soup, Antonio Biscaglia (Edoardo Gabbriellini); they run away to the woods/countryside/fields/mountains; middle-class family are left holding the account-books. What sets this apart are, I think, two key things.

Firstly, this film is absolutely ravishing to watch: cinematographer and design team (Yorick le Saux, Francesca Balestra Di Mottola, Monica Sironi, and Maria A. Cannarozzi) pull the set, the costumes and the photography into a particularly compelling coherence. The photography is strikingly impressive: there are microscopically controlled zooms that shift to tracking- and dolly-shots, foreshortened and extreme long-shots that contrast with ultra-extreme close-ups, and there is also a nice use of a very, very shallow depth of field. As with last year’s Il Divo (and as Sight and Sound also notes in next month’s edition), there seems to be something interesting going on in Italian cinema at the moment.

Secondly, there is this focus on Emma Recchi’s body, in the sense of the word as used by the (Jesuit educated) philosopher Michel Foucault. I think it’s not an accident that Emma falls not only for Antonio’s personality, but for his cooking – food has that capacity to be symbolic both of our basest needs, but also (in that contemptuous Brechtian sense) of ‘the culinary’: art that tastes great, but is over in moments without leaving anything behind in the mind (apart from a shadowy, sugary trace). This film is titled I Am Love, and like that image of Tilda Swinton in a box, the name raises questions: who is love, what is love? I suggest that underlying this piece is a Foucaultian philosophy in which desire and the body’s search for pleasure is recognised simply as more powerful than anything else. This is, I think, what love is for director Luca Guadagnino: the body’s search for pleasure; a compelling force that cuts through all other categories and alliances.

All this creative destruction becomes politically more tolerable in a plot where Emma Recchi’s bodily desires take her away from a stiflingly controlled family of quasi-aristocrats (in this reading, the film is only an aggressive remake of Room with a View). The nod towards politics is there in a number of subtle details: those with an eye for the language of design will immediately notice that the villa in which the family spend most of their wealthy time is an example of Italian modernism, a form of fascist architecture — it is a plot possibility that is underlined very briefly at one point in the film, where there is a passing reference to the source of the family’s wealth during the Second World War. A more fringe reading of Italian cinema might detect in Edoardo Gabbriellini’s subversive cooking an hommage to Nani Moretti’s high-stepping Trotskyite pastry chef in Aprile (1998). On a more serious point, the sexual politics of the film are emphasised in a moving moment of redemption, when Emma’s decision to break away from her family receives the clear but tacit blessing of her gay, closeted, daughter.

Oscar Romero called for a love that is ‘violent’: well, whatever the love or the desire represented in this film, it is certainly destructive, revolutionary, subversive of established power. As the former master of the Dominicans, Timothy Radcliffe OP, has recently acknowledged and repackaged for a Catholic readership, there is a relationship (even in our Church) between power, sexuality and desire, a political relationship he suggests that has been corruptive of our humanity and our religion.

I Am Love offers an opportunity for reflection on the relationship between these forces, between power and desire. It seems an appropriate theme for us all to consider in the light of the current crisis in the Church’s attitudes to sexuality and the institutional, hierarchical priesthood.

What is love? Hannah Arendt and the 'amor mundi'