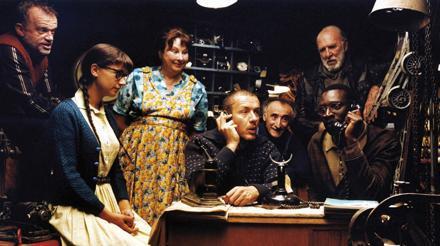 
The character list gives you a clue as to the world you’re about to enter: Tiny Pete, menacing Arab, asbestos concierge, animated sculpture, Max the scrap metal dealer, the Devil, woman with little dog. Micmacs is a role call of the weird and the sideways, those stuck in the margins of normality. Into this world lands Bazil, a film-store clerk with an accidental bullet stuck in his brain. He’s after revenge on the arms dealers who made his bullet and the landmine that did for his father many years before: a fairy-tale plot positioned somewhere between Lucky Number Slevin, Inglourious Basterds and Fantastic Mr. Fox. Combined with silent-era physical comedy and the joyful aesthetic that succeeded in Amelie, Jean-Pierre Jeunet’s latest film is an excellent escape from dreariness.

The “family” who adopt Bazil can best be described as a group of scrap-metal performance artists. Their lives oscillate between scavenging and creating in the waste heap of the city. There’s a delight in the superfluity of creation, though the film never feels overloaded with detail – Tiny Pete’s performing toys, Mama Chow’s unavoidable dinners – rather it’s a happily unstable reaction to the excesses of modern life. Their fairy tale existence on the city’s detritus illuminates by comparison one of the big fairy tales of the developed world: that things appear when you want them and disappear when you don’t want them. Disassociated from the production and destruction of the endless objects that perforate our days it can be easy to be fooled by their arrival at the front door and the disappearance of waste a few days later. What is hidden from us are, for example, the dumps in Accra, Karachi or Guiyu where children pluck out the guts of laptops and TVs. Micmacs’ landfill is a less poisonous place to live and a lot more fun but stems from the same fact of parallel machinations taking place around us. The set designers of our world can be malicious or, like Amelie, delicious – but either way there is a sense that if all the world is a stage, we don’t see all that’s gone on to make our props or write our lines, and the mise en scène was decided long before we made our entrance.

Micmacs is far from didactic – though the litany of real wars during the arms dealers’ confessions works in the same way as the real footage that interrupts the animation in Waltz with Bashir – and it feels like an escape from the iWorld by which we can feel bombarded, where everything aspires to be sleek, efficient and modish. There is already a trend of nostalgic fashion doing the rounds – young men sporting moustaches and wearing tweed, the ubiquity of charity shop vintage dresses, the cultural coup of owning a gramophone or throwing a tea and cake party – a kind of fake anti-modernity that signifies just about nothing. Despite its contrast of the slick worlds of the arms dealers and the ragged world of Bazil, Micmacs isn’t anti-technology, but it is an escape from a world where something not working is a bane and a reason to chuck it out. The YouTube finale of the film is a brilliant touch in that it locates Bazil and his family in our universe.

It’s a happy film above all – a fiction where the gutter means kindness not inhumanity, powerlessness leads to imagination rather than despair and poverty is a binding force. The Dickensian back stories of the revengers and the pleasure of watching the villains get humiliated and strung up is worth the entrance fee: it purged me of the taint of a miserable city-bound day. On exiting the cinema Micmacs wouldn’t quite let go – even the underground with its crannies and rats and nooks and tracks seemed magical. Crossing the river under a big toenail moon a family of three passed me skipping hand-in-hand to the tune of the permanent one-man-steel-band; a teenager on a date on the last night of half term broke into a skip in response, half mocking, half rejoicing.

‘Give them something to eat’: The Christian approach to food aid