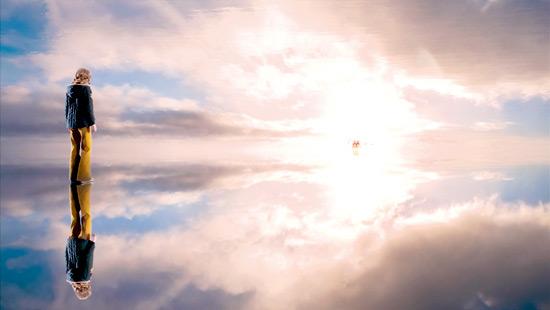 
With a shocking murder at its heart, and a vision of the afterlife that comes from a young, naïve narrator – who seems not to have been overly damaged by her horrific death – The Lovely Bones combines sentimentality with realism to uneven effect. Avoiding a focused examination of grief for extended periods in a surreal, special effect-drenched purgatory, director Peter Jackson emphasises his own film making panache at the expense of emotional purgatory.

Saoirse Ronan, as the murder victim and narrator (Susie Salmon), turns in a performance that captures teenage naivety and hope, while Stanley Tucci just about overcomes the paedophile stereotyping to be a sinister presence. While the film lacks the intensity of the book, which played off the innocence of the girl against the despairing aftermath of the murder, it engages through a relentless energy, as the themes of grief and survival are played out through police procedure, family drama and, of course, the cod-Freudian splendour of the eternal realm.

The film creates an unnecessary tension between ‘The In-Between’ of Susie Salmon’s afterlife and the horrific nature of her rape and murder. Jackson has avoided the nastier aspects of her death, leaving the real world narrative limp: if Mark Wahlberg and Rachel Weisz never quite capture the depth of parental grief, or the marital turmoil of the book, it is part of the film’s refusal to engage fully with the brutality. And Salmon’s afterlife – referred to as purgatory in many reviews, but feeling more like a drift through the subconscious – is a visual treat lacking any metaphysical bite. Both gritty realism and supernatural meditations are, sadly, without meaning.

By placing Salmon in a ghostly world, the film never attempts to answer the big questions about the continued existence of the soul, turning her into a sort of poltergeist who seeks justice in tiny ways: while she seems to have reached some degree of acceptance, the spiritual realm offers little sustenance to her bereaved parents. It is a kind of generic afterlife, owing more to Jungian archetypes and Freudian symbolism than any religious tradition. In this, it offers an afterlife that is firmly rooted in life’s experience, rather than something unique or timeless.

The elegant paradox of ‘lovely bones’ is not explored – there is little redemption to be found on earth, and death leads to a spectacular but amoral realm. That the film is sentimental – and easily watchable – is a betrayal of the serious subject matter, even if it is superficially a bright, engaging adult story.

Ignatius of Loyola: ‘Placed with the Son’