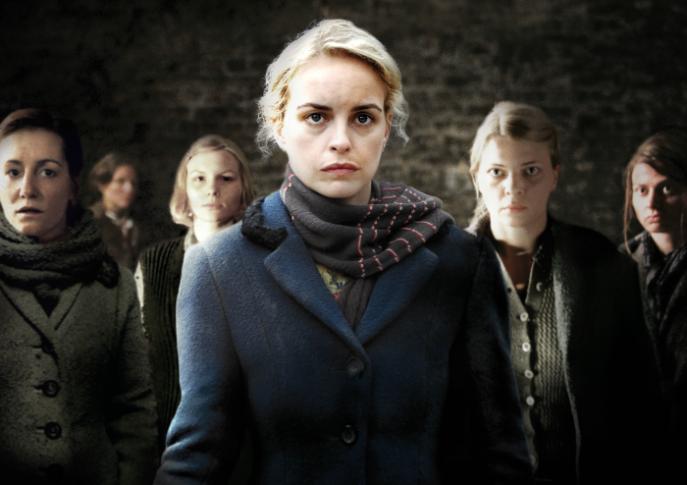 
According to the film’s post-script, shortly after the publication of the book on which this film is based, Marta Hillers withdrew it from distribution. The author is reported to have been shocked by the reaction to her memoir as one that ‘brought shame on German womanhood’.  I suppose she should have guessed.  After all, she shows a bourgeois widow ‘selling herself for food’ and elsewhere boasting of the sexual compliments she has been paid by her Ukrainian rapist.

What advertising the film has received in the UK has focused on the fact of sexual violence: as is now widely known, the advancing Red Army subjected hundreds of German women to rape.  But the violence is not the principal subject of this piece so much as the extraordinary relationships that are suggested to have developed around it.

After some initial scenes cowering in cellars and attempting to resist the Russian soldiers’ sexual violence, the author and protagonist, an anonymous blonde 35 year-old officer’s wife, resolves that prostitution is preferable to rape.  To this end, she seeks out the most powerful Soviet officer she can find to make herself ‘his whore’: horrific metaphors for those choices made by all vanquished peoples.

In time, however, a form of love builds between them.  One of the questions the film poses is what sort of love this might possibly be, in the thoroughly commodified relationships in Berlin at the time – a Berlin where everything seems to be available in exchange for a shrivelled potato.

It would be very easy to fall back on a vulgarly theoretical perspective and suggest that these women are simply victims; and I have read reviews which suggest that this film is part of a fictional revisionism in which Germany is recast as exactly that, the victim – of the Soviets, of the Nazis, of the RAF.  But this is Berlin in 1945, and the women at the centre of this film (whom we are compelled to view with compassion) are the same housewives whose knees wilted at Hitler’s perorations and who strewed flowers in front of the bronzed German manhood returning from the front in the fleeting Glücklichezeit (the ‘happy time’) of the blitzkrieg.

‘Anonyma’ herself is clear about her guilt.  She acknowledges the heady drug of Nazi energy in the 1930s, and the compelling elation of the German victories at the start of the war.  She is quite clear that she had not only been complicit in the Nazi rise to power, but had been drunk on it; as in real life Marta Hillers was herself a Nazi propagandist, whose brief journalistic career had benefited from the party’s rise to power.

But love is not only stronger than death, it is stronger than politics.  What unfolds in the pillow talk and the drunken revelations is a shattering experience of deep affection and intimacy growing in and out of and through relationships that are founded on hatred.  From the commercial sexual encounter between a man and a woman grows a relationship that is indeed a form of love, in which each is coaxed to a form of self-realisation and new honesty:  the colonel towards sacrifice, sensitivity and humanity, the woman to a confrontation with what happened in the east and a recognition of German guilt, of what was done in her name.

In the unfolding of the story, this film becomes one of those difficult dramas in which it is impossible to see anyone as wholly innocent, nor wholly guilty, nor exonerate their crimes, nor point and accuse.

If only we could point and accuse.  The Second World War, the Holocaust and Nuremberg are (not least through their ubiquity in secondary education) the closest the UK now has to a shared national myth – a case of ‘1939 and All That’.  Regrettably, that story of the small country who threw everything away to save democracy is, as well as being true, simplistic, and has served to license a Churchillian fantasy on the part of a number of lesser politicians.

What Anonyma shows, like The Thin Red Line before it, is that when governments choose to release the rage of warfare, a human barbarity fights along side the heroism of the common man.  So this film will make suitable Lenten viewing for anyone who has yet to think twice about what happened in March 2003, and what was done in our name.

Faith and the Psychologists: On how atheist psychology serves faith