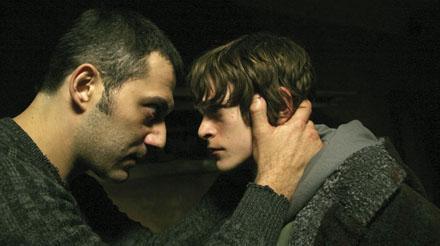 
The author Niccolò Ammaniti and the director Gabriele Salvatores have joined forces once again to produce a dark, violent and intense drama set in Northern Italy. The film condenses the themes of Ammaniti’s novel which gives it Shakespearean echoes. The ‘chiarocuro’ drama is as much elemental as human. Indeed one reflects the other. The film explores the harsh, sometimes violent but passionate love Rino (Filippo Timi) has for his young son Cristiano (Alvaro Caleca). The film, like the novel, eschews any romanticism of poverty and presents us with unrelenting brutality of life on the edge of society.

The landscapes are of stone and shallow, cold, rocky rivers reflecting an equally hard, brittle winter light. Or they are of dark nights of driving, merciless rain, entangled undergrowth and sodden muddy ground that resists and distorts every human action. This is Eden after the Fall. The fragile, neglected structure that Rino and Cristiano call home sits in this unyielding world as a metaphor for their precarious existence – as precarious socially as it is physically. Against this, Rino builds his own harsh and incoherent fascist code to hold off the chaos and make sense of the injustice of a world that has consigned him to this struggling existence. And then there is Quattro – for Quattro Formaggi – the simpleton, who completes this small community at the boarders of our social consciousness.

Quattro (Elio Germano) provides an alternative strategy for survival in this impoverished world, namely, escapist fantasy. At first we see this as an engaging innocence with the elaborate collection of items for a permanent Christmas crib. There is, however, a more corrupt and sinister fantasy, his addiction to pornography and one female ‘star’ in particular. And so the struggle for insignificant survival, neither tragic nor aesthetic might continue, if fantasy did not overtake reality and make it a nightmare.

Quattro mistakes a pretty girl for his fantasy porn star and, after stalking her one night, drags her off into the undergrowth. In a desire to turn dream to reality he attempts to rape her which ends in murder. Distraught at what he has done, Quattro has the wit to call for Rino who is so disgusted with the crime that he threatens to kill Quattro. Before he can do so Rino himself suffers a heart-attack and lapses into a coma. Here we enter the territory of the thriller noir – for Quattro is not as stupid as we thought. He may be seen as a fool but now he reveals himself to be a cunning one. He contrives to make it look as if Rino has committed the attempted rape and murder. He tries to hide their bodies and escape the scene. Their mud covered bodies lie in the drenched, entangled undergrowth; Eden has become a hostile, lawless place and the simpleton has revealed himself to be a cunning and deadly serpent ruthlessly prepared to betray to secure his own survival.

Cristiano discovers his father in these circumstances and immediately thinks the worst. Yet his love cannot abandon his father and so he sets out to save him and hide the body. The plot unfolds with the eventual discovery of the girl’s body and Cristiano discovering that his father is innocent. Now that reality has overtaken his fantasy, Quattro has no way of escape. He commits suicide. Although we have seen too much of his cunning to acquit him of his violence and betrayals, there is pity. Is Quattro, too, not also a victim?

There are two powerful and contrasting moments at the end of the film. In the funeral mass for the murdered girl, her father cries out to a silent God. He cries not only for justice but to a God who seems to have abandoned his world. Is there really any difference between the arbitrariness of lives and a world in which human existence is meaningless? Can the ritual of religion really weave some sort of fabric of sense with which to wrap ourselves against the elemental forces within and without?

Cristiano kneels by the bedside of his father and takes his hand. He confesses to his father of his failure to believe in his innocence even though he has protected him by disguising all the evidence. He now knows that it was the hapless Quattro who was to blame.  Cristiano does not know that his father has recovered from his coma. He hears and understands all that his son is saying; all that he has done for love.  Cristiano has not yet seen his father’s tears.  Here is a moment from the Winter’s Tale – a moment of reconciliation and resurrection. But they are moments within this world; they seem just as much the product of chance as the violent and untimely death of the girl.

Fortunately, at the film showing Gabriele Salvatores was present for questions. The audience seemed on the whole to be more interested in the mechanics of the film and the personality of the actors off screen than the taught and intense drama we had just watched. However, there was one question at the end asked about the ambivalent status of God in the film. Salvatores was clear that it was a film about redemption but redemption without God. His view was that there is so much unanswered evil in the world that it is impossible to believe in a God who saves. Salvation comes, he believes, through our own relationships and the human desire to heal what was broken. It was interesting that he seemed to have forgotten that other Father-Son relationship and the Incarnate God who was crucified.