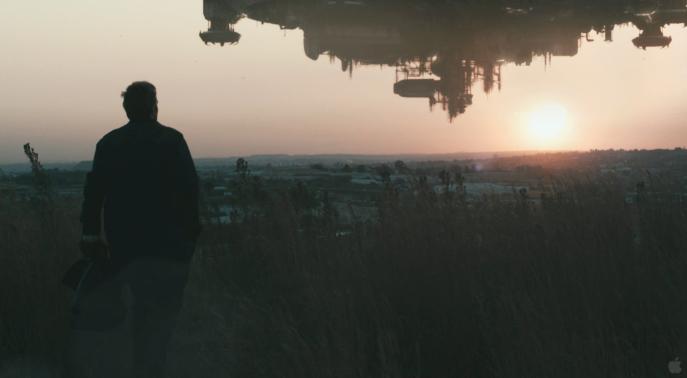 
A personal hope I have for Neill Blomkamp's District 9 is that it will end the era of fake South African accents in film. So far so good - the authentic setting of Soweto-Johannesburg, the local actors and the local idioms are part of what has made the local film critics rave. The academic talking heads in the press conferences gave District 9 as much of a homely flavour as the shaven-headed military types with Afrikaans names blazing away in the action scenes.

As for the hero, Wikus Van der Merwe, he looks and sounds just like the character in the Van der Merwe jokes which are part of the oral tradition – part bigot, part buffoon. He is also a rather chilling throwback to the gung ho apparatchiks who enforced the laws of the apartheid regime. However in his zeal for dealing with the 'prawns' as the aliens are derogatorily referred to, he might also echo some of our current problems with xenophobia on the part of both government officials and populace – 'aliens'.

The aliens of District 9 are shaped liked hominids, sheathed in lobster-like carapaces but are all too human and have become addicted to cat food (why cat food?) which is being trafficked by Nigerian gangsters. They have a warbly language, which, surprisingly, even the most limited human characters in the plot appear to understand perfectly. Hence they have neither the endearing, innocent otherness of an ET nor the implacable hostility of Sigourney Weaver's omnivorous nightmare.

They were pretty unlucky, I suppose, to end up marooned over one of the world's tougher cities. However, when the Johannesburgers broke into their craft they found them in such poor shape that they felt constrained to take them in, though they soon decided to segregate them in an 'informal settlement', in real life the Chiawelo area of Soweto. Eventually it is decided to relocate them further from the city, which is when the trouble starts.

There are no clear-cut heroes in District 9. It's a pretty Hobbesian world in which everyone acts out of self-interest.  There have been complaints about which groups have come off worse in the goodies-baddies stakes. The Nigerians can fairly count themselves particularly hard done by as they are depicted exploiting both aliens and humans. But the white corporate manager in charge of the company tasked with moving the prawns is as sinister as he is powerful. He is secretly experimenting on the prawns and desperately wants to find the secret of how the devastating alien weapons can be made to function with human-alien DNA.

Van de Merwe is something of an exception in that he goes through a moral Odyssey for the full 112 minutes as he has an unexpectedly close encounter with very unexpected outcomes (at least for him if not the movie-watcher). The main conceit of the film is well-tried but Blomkamp, with the technical support of Peter Jackson, tells it afresh in a sci-fi movie set in a city in the developing world.

What counted as strengths for other local critics somehow backfired for this writer. The suspension of disbelief required by sci-fi makes extra demands on you when you actually live in the place in which it purports to happen. Johannesburg with a huge spaceship hovering overhead for 20 years? Joburgers who went to the rescue of the distraught aliens? And who put them up, albeit in one of the poorer parts of Soweto? There were also some fairly large gaps in the plot and the marksmanship of the machine-gun wielding security forces is particularly low-grade, even in the world of celluloid belief-suspension.

In the end it may not be possible to push a sci-fi allegory too earnestly. I for one found the allegorising somewhat too obvious and heavy. But the story is fast moving, and the action scenes keep rolling in like the vehicles and helicopters that Blomkamp hired from the UN; the effects are excellent and the Joburg setting has all the rough charm of the mining town that Joburg remains, a place which, after all, was once invaded by 'uitlanders' as the Afrikaners called the gold-addicted aliens of the late 19th Century.