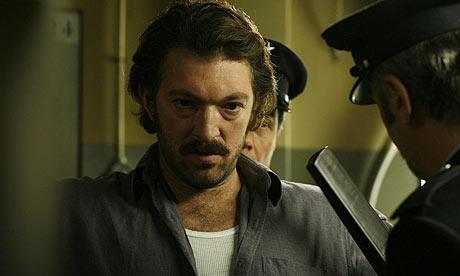 
Mesrine: Public Enemy No.1, the second instalment of Jean-François Richet’s two-part biopic of the infamous French gangster and self-titled ‘revolutionary’ Jacques Mesrine, begins just as its predecessor did, with a reminder of Mesrine’s brutal end. Whilst the opening of part 1, Killer Instinct, documents the events leading up to Mesrine’s death in 1979, when he was shot by a van-full of French police whilst trying to escape the capital, Public Enemy No.1 opens with the aftermath. Crowds have gathered round the flashy wreck that was Mesrine’s car, now riddled with bullet-holes, smattered with blood and holding its lifeless owner. Comissaire Robert Broussard, the police chief in charge of the hunt for Mesrine, arrives at the scene and takes it in, somewhat disbelieving. ‘It’s over’, he says, ‘He’s dead’.

Having put Mesrine’s life abruptly into perspective, Richet takes us back to 1973 and picks up where Killer Instinct left off. Cassel’s now ageing Mesrine comfortably seduces the audience all over again (the plumpness he gradually acquires is more than made up for by his confidence and charisma). Robbing banks (two at a time now) with such ease and comfort that it seems to only vaguely thrill him, Mesrine is living in a world of his own construction, completely detached from the law. Even after he is caught he escapes so easily and with such audacious disregard for the situation and the establishment (he takes the judge at his hearing hostage).

When he is caught again, his flat surrounded by police marksmen, he responds to Comissaire Broussard’s knock on his door with a measured and calculating coolness that seems almost unbelievable. He barters a half an hour before his arrest with a promise to come out peacefully after that time. He spends this thirty minutes burning passports and placating the hysterical woman he has charmed into his bed, and greets the police in evening wear, cigar in smiling lips and champagne in hand. At his trial, Mesrine does not deny his crimes, but argues the falsehood of the charge of their criminality. He disputes his status as public enemy number 1, declaring to the court with alluring candour that he is not the enemy of the public, but the enemy of banks, and that the state labelling him so is confirmation of its corruptness and deference to money and big business. ‘I’m just robbing a bigger robber than myself’, he says. Whether one believes that bank robberies are justifiable or not, one cannot help but find some truth in Mesrine’s ideals, and an admirable courage in his dismissal of the charges and the state’s concept of justice. Richet does not let this slip by, however, without an awakening reminder to the audience of the real nature of Mesrine’s crimes. A crowing Mesrine is in full flow defending his ‘revolutionary’ ideals, when the judge cuts in. He is angry, almost shaking, at the courtroom’s treatment of Mesrine, which has been laughing at his jokes in a way that suggests it is sympathising. With chilling and real outrage, he warns the audience in the courtroom (and the cinema) that one must not forget the nature of his crimes. He has killed many without hesitation or remorse, and will do so again. He is a brutal and violent man, who has shown on numerous occasions his disregard for human life. This is a necessary reminder, and is probably the most charged moment in the film. The judge’s anger at the fickleness of the public, in the courtroom then and in the cinema now, and the ease at which Mesrine has taken us in shocks the chastised viewer, and Mesrine’s acts are again pulled back into perspective.

After Mesrine is inevitably sentenced and incarcerated (again), he inevitably escapes (again), this time in a guard’s uniform and over a wall. Mesrine’s swagger, along with his paunch, is becoming bigger, his varied and often comedic costumes more elaborate and his ideas far grander. He begins to talk of revolution and death. Richet here introduces one of the bigger questions to cloud the life of Jacques Mesrine. Was he a revolutionary or just a gangster? He certainly had revolutionary ideals, and acted in accordance with them, but there are certain questions about how far he went. Henri Lelièvre, a millionaire he kidnaps addresses these directly in the film. Lelièvre asks: ‘Do you know the difference between a revolutionary and a bandit?’ Mesrine is somewhat stunned by this question. Lelièvre continues to explain that a true revolutionary would have killed him immediately for his immorality, whereas a bandit would take his money and let him go (something which Mesrine had promised all along).

As Mesrine’s road slowly nears its end, he becomes more and more occupied with his death. The man who once said ‘Nobody kills me until I say so’ starts to acknowledge the inevitable. When asked by a reporter how he thinks he will die, he admits thoughtfully that he is not the sort of man who grows old. When asked further if he thinks he will be killed he says: ‘It’s logical. It’s the outcome.’ This is reminiscent of a certain piece of old wisdom that talks of a life lived by the sword ending with it. As his death approaches, the audience can almost see its reflection in his eyes.

Public Enemy No. 1 is a complex, gripping and ultimately tragic take on a life that was those three things and more. As in Killer Instinct, Cassel commands the screen and inspires nothing short of awe in the audience. Ludivine Saugnier is excellent in her supporting role as Mesrine’s last love and Mathieu Amalric is very convincing in his cautious and level-headed portrayal of Mesrine’s last accomplice. Richet’s conflicted depiction of Mesrine is expertly subtle and manipulates the audience’s sympathies effortlessly. Both parts of the biopic are now showing in one piece, how it was always intended to be shown, so if you can stomach four or so hours of whirlwind romance, stubborn rejection of society, real violence and talk of revolution, now is probably the best time to catch Mesrine.