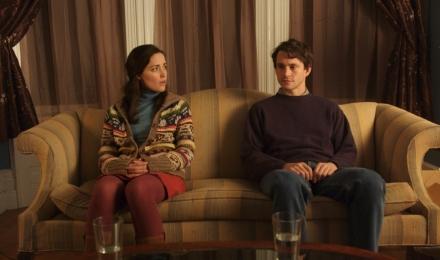 
As the winner of the Sloan Prize at this year’s Sundance, Adam arrives at the multiplex with an independent credibility. Attempting to use the romantic comedy format to think through the problems of Asperger’s Syndrome – or using Asperger’s to interrogate romantic comedy’s sentimentality – Adam is brave enough to place a difficult subject at the heart of the film, and Adam’s own communication difficulties serve as a symbol of human miscommunication.

Adam (Hugh Dancy), at the centre of the film, avoids most of the usual mental-health clichés that undermine most cinematic studies of psychiatric conditions: his awkwardness is painful and charming, an exaggerated version of romantic struggles common in both life and art. He can be unpleasantly blunt and self-interested – particularly when he talks about space or sex – and the film does not flinch from the consequences of his illness. Yet, because we are aware of his condition, he is given a sympathy that would not be given to other characters, and this weakens the impact of his behaviour for the audience.

His romantic interest, Beth, is unevenly characterised: at times experienced, other times naïve, she is reduced to a foil for Adam’s own drama. Like many Hollywood heroines, she is rather more of an object than a person in her own right. Perhaps more than anything else in the film, she is captured by the conventions of the Rom-Com. Played with charm by Rose Byrne, her attraction to Adam is delicately nuanced; his distance initially frustrates her, but also might be the spur to her interest. As they come together and deal with typical romantic situations, such as meeting friends and her parents, Adam’s autism becomes a challenge to their love, and her personality veers uneasily from desire through compassion to disappointment.

The romantic comedy is well-written and resolves itself with aplomb; but the issue of the autistic spectrum, which lies at the heart of the film, is never effectively grappled. While the details of Asperger’s are performed, they are filtered by the soft tone into slightly exaggerated idiosyncrasies rather than symptoms of illness. The planetarium scenes, the Forrest Gump joke, the midnight trips to Central Park are all eccentric rather than autistic; in order to make Adam a credible and recognisable romantic hero, he has been smoothed, made poetic.

Ultimately, Asperger’s Syndrome is not really taken seriously. It is a challenge that the lovers must face, and it is a victim of the structure and mood of romantic comedy: nothing terrible must happen to the protagonist, only the illusion of darkness. It is a striking high concept that veers very close to exploitation: even if it avoids the Oscar-winning carpet-chewing of other films featuring a character with mental health issues, it does not provide a satisfactory meditation on autism. This is a good rom-com that is made uncomfortable by its ambitions to aspire to a greater meaning.