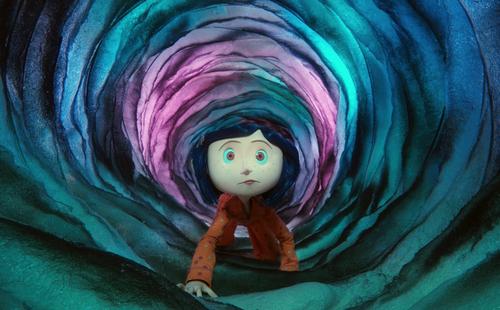 
I’m not sure quite what it is about the promise of three whole dimensions that awakens such excitement in a person. We live in three dimensions, or so I’m told. So, clutching the standard issue 3D glasses of the year 2009 (we have moved on, apparently, from cardboard frames with one red and one green lens), I take my seat and try to work out whether I’m supposed to wear them for the trailers. (I’m not, by the way.)

Expectations have been very high for Coraline. Directed by Henry Selick (Nightmare Before Christmas, James and the Giant Peach), who must, by now, be considered something of a pioneer in contemporary animated film, there were feelings prior to its release that it would live up to and even surpass his previous works. It is cut from very much the same cloth (excuse the pun – everything in the film is handmade) as James and the Giant Peach. Both are thoughtfully told adaptations of recognised and beloved children’s stories with clever, conceptual animation, arresting imagery and a child protagonist reaching the upper years of their proper childhood and having to strive well beyond their means to regain control of their world, literally and metaphorically. Unlike James, though, Coraline’s adventure is an inward one, and she plays a significant role in bringing her troubles on herself.

The film’s opening scene is very impressive, possibly its best. The audience join a doll being manipulated by a pair of sinister skeletal hands who skilfully, in no more than half a minute, take it apart completely and make a new doll out of its remains, one that looks just like Coraline. Selick’s artistic eye and attention to detail in direction are apparent immediately, and set the tone for the rest of the film. As dexterous fingers work the sharpest of needles through shiny buttons and woven cloth and, thanks to the 3D glasses the needle protrudes from the screen to rest, almost, on the tip of your nose, one can feel themselves investing in Coraline’s world already.

At the heart of this story lies something of a warning. Coraline, becoming disenchanted with her life, her new house away from her friends, her parents’ lack of attention and her annoying new friend Wybie, runs away. She runs away through a secret door to a world just like hers. Well, not quite like hers. Everything is better there. Her ‘other’ parents exist only for her pleasure, chatterbox Wybie is unable to speak and she even has a four-poster bed. The one uneasy reminder that the world is not perfect is that, instead of eyes, everyone here has two shiny black buttons. Coraline’s unease is quickly overwhelmed, however, by the brilliance and magic of everything else around, and she fickly abandons her ‘real’ parents with the smallest hesitation. Here is Coraline’s nearly-fatal flaw, the fault that almost secures her downfall. She is taken in too easily, bribed with treats and leniency, and although she is not altogether unaware of the sinister tone that certainly suggests ulterior motives, she makes her decision to ignore it.

Undoubtedly, this film is a magnificent one to look at. The freedom that animation of this kind allows has not been wasted. The world created by Selick’s team is nothing short of magical. Juxtaposed with the beautiful but somewhat inhospitable landscape of Ashland, Oregon (the town to which Coraline and her parents move at the beginning of the film) are the fantastical ostentations of the world through the secret door, where assemblies of flowers spring from the ground before your eyes, candy floss fires from cannons and ‘jumping mice’ perform perfectly choreographed shows for Coraline’s (and the audience’s) wide eyes. This, to me, is what is most special about animated films. A world can be made from scratch. The story is not constrained by the way boring, ordinary things like people and walls and cats – which are all good for some reasons and not so good for others – are seen in the real world. In Coraline, each wall has been created especially for the purpose of constructing and being within the story’s reality, and so it looks exactly as it should. It is, in a manner of speaking, perfect. And there is certainly something special about walking in on a world like this, one you know has been made just the way it was intended, just for you to look at and participate in.

Coraline is a very good children’s film and, as in all good children’s stories, there is room for adults, more so than in the majority of other children’s films. It is imaginative, clever, scary and ultimately redemptive. It follows in the same vein of centuries of fairy tales with a macabre feel, a sinister force at work and a vulnerable, naïve, well-meaning, if a little bit self-important hero who, inevitably and in spite of herself, becomes saviour. The audience follows a child’s journey into her own distresses, temptations and failings and, ultimately, arrives at loyalty, love and fellowship. All may continue as normal in Coraline’s household at the journey’s end, but one gets the feeling that something has irrevocably changed.

No Country for Old Men

The next world crisis?