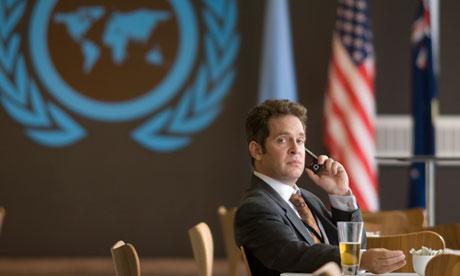 In the Loop is a very funny film in the long tradition of British political satire with a nod towards the bitter humour of Evelyn Waugh.  Just like Waugh, Armando Iannucci shows the unpalatable fact that so often in war (and its proxy, politics) it’s the backsliders, the cheats and the duplicitous scumbags whose careers seem to rise inexorably, while the real heroes (with their quiet moments of self-sacrifice) go un-noticed or betrayed.  Despite this darker side to the comedy, the witty dialogue – sprinkled with a barrow-load of gross vulgarities – keeps the audience laughing, saving us from throwing our chairs at the screen in anger at the injustice, or hiding under them in embarrassment.

Beautifully, the story begins with one of those unexpected questions on the Today programme that can occasionally catch ministers unawares: a handful of mistaken words cause everything to unravel. Simon Foster (Tom Hollander), ingénue and for some reason Minister for Overseas Development, has been given the graveyard interview just before nine, and has been dribbling-on about diahorrea (‘what is this, the shi*ting forecast?’ asks the enraged press secretary).  Thoughtlessly (or possibly, just telling his own version of the truth) he says that any new war in the Middle East would be ‘unforeseeable’.  Such a statement – when the Government has hitherto been quite consistent on the subject, consistently evasive – is regrettable.  So he is forced to back track, in the street, surrounded by a mob of the media fox-hounds (in a model, incidentally, of exactlywhat Labour Party media training tells you never to do).  Here his magisterial comment is that ‘to walk the path of peace, occasionally we must climb the mountain of conflict’ (‘”Climb the mountain of conflict”?’ snarls the press secretary this time. ‘You sound like a Nazi Julie Andrews’).

The unexpected result of this is that Simon Foster becomes a tool in the machinations of bothsides, the hawks and the doves, and is flown to Washington to make everything even less clear.  War and politics are full of the unexpected results of one’s actions: in reality tragedy, in fiction, farce.

In the Loop is such a funny film that if I have a reservation, it’s that it was too easy to laugh my way through the whole two hours.  Laughing at things robs them of their power, so it’s commendable to laugh about the bullying machismo of the spin machine.  But I have this niggling concern that there are things about the invasion of Iraq that we should remember through something other than comedy.

The centre of the comedy – and the dramatic tension – is drawn from watching Simon Foster spin in the wind, unable to decide whether he supports the unnamed proposed war or not.  The grit in this satire is that this was exactly what the Labour Party did in 2003. The tragicomedy lies in the study of men lying to themselves about what they really believe, unable to admit the truth even to themselves. It’s the problem that faced Pontius Pilate:  I don’t really want to do this bad thing, but the political forces seem stronger than me, what else can I possibly do?

Back in 2002, one answer to this niggling doubt was the scrabble to find a version of the truth that fitted what people wanted the truth to be, hence the notorious dossier, Iraq’s Weapons of Mass Destruction.  In the Loop beautifully satirises the sloppy thinking that surrounded its authorship.  The fictional dodgy dossier in the film began life as a highly critical, anti-invasion report, hitherto unread by the key policy-makers (because they don’t read), hastily edited of all its criticality, evidence, nuance and provisos.  Such a process is often referred to as ‘sexing-up’.

The Hutton Inquiry found that the British Government’s dossier was not in fact ‘sexed-up’ as occurs in In the Loop.  But the Inquiry also concluded that political requirements may have subconsciously influenced the presentation of the intelligence.  Nothing improper occurred, but some of the psychological boundaries appear to have been blurred, with an adverse effect on the truth, because the truth was not what people wanted to hear.  As the late Robin Cook pointed out in his resignation speech, the truth was that ‘Iraq probably has no weapons of mass destruction in the commonly understood sense of the term’.[1]

New Labour ideology has often swatted such scrupulosity aside, claiming that compromise is necessary to achieve what really matters.  And, of course, everyone does have to compromise in some way, at some point in their life.  But the real skill is to know when your compromise is actually about the good of the country and not about saving your job or keeping your career staggering on for another year or two.  So it is important to remember that it was Mr Cook, a man who claimed to be an atheist, who threw his career away to defend his idea of truth – unlike a number of professing Christians involved.

In The Loop Trailer - In Cinemas April 17