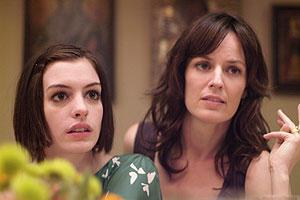 
Princess Diaries? Bride Wars? No, these films were never going to win Anne Hathaway any acting awards. But by playing completely against type in Rachel Getting Married, she is now fighting it out for THE award. When the Oscar nominations were recently announced, Hathaway’s name could be found in the Best Actress category, right next to Oscar regulars Meryl Streep and Kate Winslet, for her role in this film. It is a nomination that is completely deserved.

Hathaway plays Kym, a drug addict who has spent the best part of the last ten years in rehab. She is given weekend release so that she can attend the wedding of her older sister Rachel (Rosemarie DeWitt).  When the two sisters are first reunited, the prevailing mood is one of happiness. However, it takes only a little time before old feelings of hurt and resentment begin to appear. In fact, there are moments in the film when the audience must wonder if Rachel has any love at all for her younger sister.

Kym is clearly a troubled person, who finds being with her family as stressful as it is enjoyable. As we witness one of Kym’s addicts’ meetings, we find out that much of the tension stems from the fact that she was accidentally responsible for the death of her younger brother, who drowned while in the care of his intoxicated sister.  We see how this event has affected each member of the family, and particularly how it has shaped Kym’s feelings about herself and her relationships with her family. The effects are shown vividly during a dramatic confrontation between Kym and her mother (Debra Winger). Watching mother and daughter fight is one of the most raw and pivotal moments of the film. It feels as if this is the first time the pair have discussed the infant’s death.

The film is essentially a close observation of intra-family relationships in the run-up to the joyous yet stressful occasion of a wedding.  The film allows the audience not only to witness the emotions, good and bad, that are brought to the surface, but also – through the use of hand-held cameras as a filming device – to become involved in the action. This is especially true when we watch the final scenes, the wedding itself: we feel like we are actually dancing with the wedding party, rather than just viewing the scene from our cinema seats. While this filming technique is no longer very original, for this film it works perfectly.  It gives the audience the impression that they are watching one long home movie.

Until the wedding scenes, the majority of the emotions conveyed are those of sadness and resentment. This melancholy, however, makes way at the end of the film for the happiness that arises when the bonds of familial love overcome the hurt and pain that have been caused, as such love can do. While Kym’s family may not be able to forget some of the things she has done, they have forgiven her and love her unconditionally.

Rachel Getting Married, with its ultimately uplifting message, is a beautifully made film. The contrast of Kym’s depression and her sister’s bitterness with the love they have for each other is a joy to see on screen and, in a non-Hollywood/Disney/nauseating way, makes the audience appreciate the importance of family.