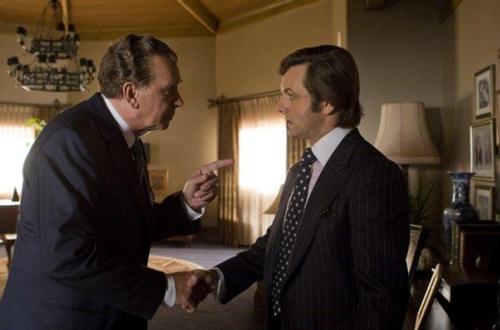 
Silence was always a lingering facet of President Richard M. Nixon’s political career. In 1969, Nixon claimed that it was the ‘Silent Majority’ that would re-elect him president. W. Mark Felt, the FBI agent and secret source whom Watergate journalists Bob Woodward and Carl Berstein salaciously dubbed ‘Deep Throat,’ was compelled to keep silent about his identity for thirty years. And then there was, most damningly, the crucial 18 minutes of taped presidential conversation ‘accidentally’ erased by Nixon’s personal secretary Rosemary Woods as she transcribed perhaps the most sensitive of all the Watergate tapes.

What director Ron Howard does masterfully in this film, with the writing of Peter Morgan leading the way, is to begin to fill in the infamous 18 minute gap. The material he uses to do this is the set of interviews conducted between presenter David Frost and Richard Nixon in May 1977. In these interviews, Howard has found his electric moment. He allows catharsis to triumph in the most unlikely of venues, and under the coordination of a then-unlikely figure, David Frost.

Frost had had a rough time of it on American television in 1972, having his talk show shoved into a late timeslot and eventually cancelled. But this was not for lack of gravitas. Frost’s stated aim upon leaving the scene in New York was precisely to pursue public affairs programming. Distancing himself from the pack, he intended to renounce his early satirical roots and head into the more grey-flannel world of news reportage. Frost’s emergence as a serious interviewer took five years, so that when he sat down with Richard Nixon in 1977, he was aptly prepared to plunge into the long Nixonian silence.

As the story unfolds, the viewer is constrained to remember that, essentially, this is a film about an interview. But the interview itself held historic significance. It was the first time President Nixon had gone on record since his resignation from office on 9th August, 1974. Nearly three years later, Frost was set in front of Nixon for what was promised by some to be ‘the trial Richard Nixon never had.’

The larger drama is supplied through a creative mix of excellent acting and informative back-story. Howard has chosen to recount the convolutions of Watergate via ersatz off-camera interviews, conducted by reporters Bob Zelnick and James Reston, Jr., which keep the viewer connected and informed. Cinematic methods aside, it is the acting which is most gripping.

Frank Langella is not only a convincing look-alike for Richard Nixon, but he also ably captures much of Nixon’s quixotic charm, intellectual scope, and seething will to power. Michael Sheen is remarkable as David Frost, but Peter Morgan’s characterisation of Frost seems a bit incongruous. Frost is portrayed as a breezy playboy, more adept at popping champagne corks than popping-off at former presidents. Frost/Nixon aims to create a contrast between Frost, a lightweight presenter whose career is in a tailspin, and his tweedy research advisors. In addition, looming ominously in the background is the monumentally well-prepared Richard Nixon, the world-class debater who once vanquished Khrushchev. This set-up creates the catharsis, although the story is not exactly accurate.

In May 1977, the United States was still divided over Watergate, a state of affairs not truly represented in the film: Frost’s feisty East Coast Liberal research team members are the true keepers of democracy; Nixon’s handlers come across as a cowering circle of irrelevant, ultra-conservative ideologues. Lost in this simplistic dichotomy is the fact that that many Nixon advisors – two with surnames of Cheney and Rumsfeld – were the keepers of core Republican political strategies which would propel Ronald Reagan into the White House within three years of Frost’s broadcasts.

What is more accurately depicted, if at times caricatured, is the cohesive role played by religion in American life in 1977. Frost’s Methodism – he is the son of a Methodist minister – is mentioned along with Nixon’s Quakerism, and Henry Kissinger’s Judaism. Nixon, who employed a Roman Catholic priest to write his speeches as a vice presidential candidate, was always open to ‘religious sensitivities.’ When a sincere Nixon relates his pre-resignation Oval Office prayer session with Henry Kissinger, one wonders if in this context prayer is being used as fuel for further indictment, or the simple rendering of fact.

For a film director, silence is lethal, but Ron Howard has taken the opportunity to draw Nixon out of the silence in this suspenseful and engrossing film.