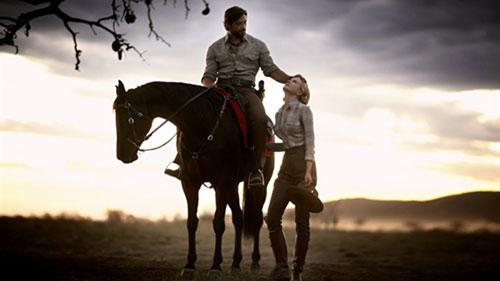 
The scene is set: bounding kangaroos, sweeping landscapes, indigenous hunters, war, peace, romance, beer and brawls; welcome to Australia, love.  The ‘epic’ style allows film directors to take many liberties, particularly when it comes to stereotyping.  And in this Australian take on Gone With The Wind, you get stereotyping by the bucket-load.

The set up is classic: wealthy English aristocrat journeys to the far side of the world where a daily struggle is waged against the inhospitality of the vast deserts of Australia.  The Lady Sarah Ashley (a wooden Nicole Kidman) arrives in Darwin straight from her country seat in England to take control of a cattle station in the Northern Territory of Australia.  In Australian lore, English aristocrats are almost invariably feckless and soft, unprepared for the harshness of Australian life.  The boys in the Darwin pub chuckle over a warm beer, “She won’t last a minute, haha.”  In the real world, perhaps they would have been right.  After all, running a cattle station in the Northern Territory during the 1930s would have been a tough gig.  But in Australia, a spoilt English lady can transform herself into a hard-edged, new age woman over night.  She takes over her property, Faraway Downs, stands up for the rights of the local Aboriginal people and generally starts with a bang.

The film contains all the popular romance of Australia and displays a place alien to Europeans and contemporary urban Australians alike.  The rough and ready Australian men riding horses at breakneck pace across the burning desert fit perfectly with that Australian myth of the tough man of the bush.  The first twenty minutes of the film are entertaining, with comedy made of kangaroo-shooting, pub brawling and the disconcertment caused among the locals by aristocratic manners.  From here, the story not only gains flesh, but becomes long-winded.  Lady Ashley becomes entangled in the politics of the Northern Australian beef industry and, with a steely gleam in her eye, determines to take on the corrupt local beef monopoly.  Sound romantic?  No, but in true ‘Western’ style, the struggle leads to a life and death adventure, as love is born between ‘The Drover’ (Hugh Jackman) and Lady Ashley while they herd cattle for hundreds of kilometres, through deserts and fire, defying the efforts of the unsavoury emissaries of the beef monopoly.

The developing love interest between the sweaty Australian Drover and the prim English woman is a core narrative.  But interlaced with this are the themes of race, the Aboriginal Dream Time spirituality, the red desert landscape and the Australian nation.  By attempting to explore all of these themes in one over-long film, Luhrmann fails to create a strong storyline; too many bases are covered.  The plot follows all the usual patterns: love, a period of strife, a great challenge, sacrifice and the final victory of the lovers and the forces of good.  Hugh Jackman’s performance is average, although the Drover does introduce some of the few rays of respectable humour into the narrative.

Race discrimination and the treatment of Aboriginal people by white settler Australians is certainly a prominent element within the narrative.  Nulla, a small boy of mixed race, is a victim of the policy of removing Aboriginal children from their homes, children who came to be known as the Stolen Generations.  But ironically, Nulla is ripped from the lily-white arms of Sarah Ashley, his self-proclaimed guardian, rather than from an Aboriginal mother.  To an Australian, it seems almost humourous that an English aristocrat is seen to be leading the charge for Aboriginal rights in the 1930s.  The film seems to devalue the real Aboriginal story.  It appropriates the theme of the Stolen Generations (even referring to the Australian Prime Minister’s apology in 2008 in the conclusion) but allocates it scant attention.  Additionally, the Dream Time is romanticised and turned into a mystical source of magic which comes in handy when rounding up ‘cheeky bulls.’

In light of the recent apology to the Stolen Generations, the film seems to call for unity between Aboriginal and white Australians and beg for greater reconciliation: “just because it is, doesn’t mean is has to be.”  However, attempting to discuss themes that are very serious to Australians via the medium of overblown Hollywood drama doesn’t push my buttons.  In this case, it seems opportunistic.  And like all Hollywood epics, the film ends on a didactic note, designed to send the viewer forth with their emotions on the boil.

To be fair, this film did at least recognise an important question for Australians in the twenty-first century: the perception of home.  The alien voices carried in the night across the Australian desert and red rock, the dotted fires and immense landscape were evocative images.  They tie into the exploration by Australians of their own identity and history over the past century.  Australia ends by touching upon the questions of the twentieth and current centuries, of whether Australians will look towards the Europe of their past, or to their own continent and identity: “You are on a journey, and now we are going home, to my country, to our country.”  Sadly, the confused plot, stereotyping and lengthy running time combined put me in mind of my own journey home, to bed.

Beatitudes on Film: We’ve got a golden ticket