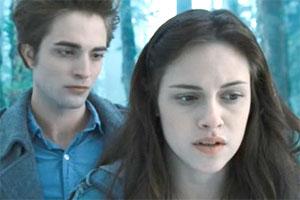 
Twilight the novel is a cult bestseller, combining a luscious yet chaste sensuality with an angular reinvention of vampire glamour. The film, at least to its audience in Glasgow, is far less interesting than the sub-culture that surrounds the book; movie posters have been covered in kisses and many of the teenage audience arrived at the cinema covered in felt-tip declarations of love for the hero.

The plot – which the film follows surprisingly faithfully, even extracting huge chunks of dialogue and including scenes that aren’t entirely clear without the benefit of the book’s detail – is simple. A big city girl, Bella (Kristen Stewart) arrives in a small town. Despite her attractiveness to the guys at school, she falls for the aloof Edward (Robert Pattinson). Her feelings are reciprocated, but Edward turns out to be a vampire. A nice vampire, perhaps, who refuses to drink human blood on principle, but nevertheless strong, fearless, wise and troubled.

The real strength of the book lies in the breathless descriptions of Edward; Pattinson has no chance of being so restlessly beautiful, and the film struggles to capture the elegiac longing that makes the novel more than just a simple teenage romance. Bella, who is meant to be the heroine, is far too passive; her love for Edward – always unfulfilled, always repressed – is reduced to a girlish crush.  Rather than dwell on the characterisation, director Catherine Hardwicke brings to the fore the dramatic battle between good vampire Edward and bad hunter vampire James.

While Cam Gigandet captures the grubby allure of James far more effectively than Pattinson conveys Edward’s angelic charm, this subplot is relatively awkward and is little more than a background to reveal Bella’s intense desire and Edward’s restraint. This gives the film an air of confusion, as if it can’t quite decide whether it wants to focus on action or romance.

With the movie being a relatively tame rehash of the best bits of the novel, plenty of critical energy has been directed at author Stephanie Meyer’s Mormonism. Whether in the paranoid calls for a boycott of the film and the series of books, or the more thoughtful explorations of Mormon eroticism (essentially the consideration that abstinence has its own sensual charge), Twilight has been identified by its commentators as advocating a specific religious morality.

Edward and Bella’s chastity is a central theme. It is made clear that any explicit sexual contact, beyond kissing, would be too much for Edward: his desire for Bella would cause him to tear her apart, due to his superhuman powers. Bella’s desire – to become a vampire – seems to signify her need for physical intimacy, a desire and need consciously refused by Edward, making him even more attractive to her.

Unfortunately, this can’t really be drawn into a coherent ethical scheme. The so-called “erotics of abstinence” that the film promotes depend on the idea of no sex being sexier than sex, or some sort of moral self-teasing that seems wilful. The film makes no effort to explore the ethical dimensions of their relationship, offering only a few clichéd temper-tantrums to clarify poor Edward’s torment.

Unfortunately, Hardwicke rarely uncovers them. There are moments of charm – the first date, Edward’s family scenes – and moments of action, as when Edward races to save Bella or lifts her up a mountain. Yet, as with so many adaptations, the book is much better.