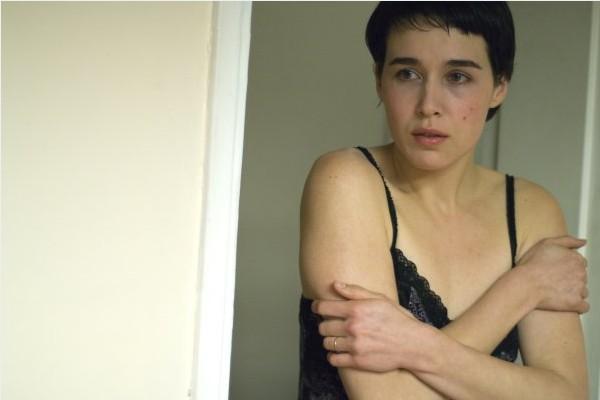 
Watching The Silence of Lorna is like witnessing a conscience in action. Lorna is an Albanian woman caught up in a marriage scam in order to gain Belgian nationality: it is her conscience that begins to stretch its muscles as her “boss”, Fabio, demands more and more profit. As the story plays out we see the battles between Lorna’s dreams and her sense of morality, and between those who would push her to ignore that insistent internal voice.

It’s a very quiet film, devoid of soundtrack to the extent that the uncomfortable whispers of the audience were audible across the cinema, as were the opening credits of the film showing in the adjacent screen. The silence in question, Lorna’s, is both descriptive and provocative; the face of the actress Arta Dobroshi barely shifts from an opaque expression of defence. Her taciturnity in expression throws into relief the moments of spontaneity: her joy at dancing with her boyfriend in contrast to her stone-like waltz with another prospective passport-husband.

The naturalism of the film makes for uncomfortable watching. Scenes have a habit of ending with a neutral recording of insignificant events: Lorna putting items into a bag, or examining a chair or drinking a glass of water. These patches of silence become more tense once we realise what is happening within her, and are interspersed with shots of the dry cleaners where Lorna works: a place of compressed gas, chemical sprays and hot irons, everyday objects that are imbued with menace by the camera’s refusal to turn away.

At the heart of the film is the question of how deeply the characters recognise humanity in each other. All of us, through psychological and cultural defensiveness, perhaps, rather than malice, close our eyes to the real depth of humanity in other people: thousands seen dying on television, or crouched on a street corner, or even the assumption that “that’s just the way it is”. Fabio is bemused at Lorna’s concern for her first passport-husband Claudy: “He’s just a junkie”, he points out. His puzzlement is understandable; after all, Lorna has already agreed to take advantage of his addiction by marrying him for her new nationality, so why should she take the trouble to begin to see him as a human being? We see Lorna’s conscience taking a stand in the war of the everyday, challenging first her own will and then that of others.

The Silence of Lorna has been described as a tragedy. There’s certainly a deep sadness underlying the narrative, but it’s not a tragedy in the simplest sense of the word. Despite the debilitating environment many of the characters live in there’s too much power within Lorna to call her a victim in the passive sense of the word. And I can’t remember leaving a cinema as I did having watched this film, with the small unspeaking audience seated and listening to a piano play over the closing credits as if they were making observance of a liturgy.

From Harry Potter to Jesus Christ

Europe: What is Pope Benedict Thinking?