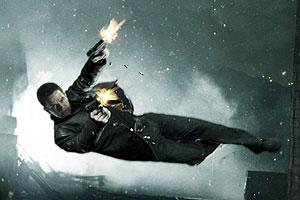 Unfortunately the film itself terrorises conventional notions of theme, plot, characterisation and suspense, spinning out multiple twists in an increasingly desperate attempt to hold the audience’s attention. By the end, when Payne has been reduced to a stereotypical cop-done-wrong and the thefts from Jacob’s Ladder have been abandoned for gung-ho Matrix steals, even the celluloid seems to have stopped taking the film seriously, lurching from sepia sentimentality to psychedelic noir with no purpose or meaning.

This chaos does expose two interesting facets. First of all, the villains behind the horror, after several false leads, are revealed to be an ultra-modern conspiracy of rogue pharmacists and the military. Secondly, the interesting potential of the apparent demonic army gathering about the city is squandered for a very dull reduction of mystical experience to chemical imbalance. Through some thoughtless movie-making, Max Payne inadvertently grapples with contemporary paranoia.

Payne could have been a classic tale of an anti-hero seeking redemption, balanced between violence and salvation, aware of the horror but somehow remaining above it. Instead, the movie is a bad trip, a recreation of the disorientation and senselessness generated by ugly drugs and disturbed minds. The Norse symbolism, the meditations about divine power, the theme of spiritual warfare are all merely the mutterings of addicts. Supernatural forces, which provide the film with some remarkable visual sequences, are mere delusion: mental states controlled by drugs. The potent metaphors of demonology are wasted. Marginalised as flashy effects, they could have lifted the film into allegory or explored the meaning behind some of the random violence.

Having reduced spirituality to chemistry, the plot also fluffs the source of the evil. An experiment gone wrong creates a super-drug, which gives the user a mystical experience. The mysticism in question is Viking, so the users run around screaming about Valkyries or hacking each other into pieces.

Behind the action is a double paranoia. There is the problem of the warrior returning from war, having done things no human should ever do. This was the story after Viet Nam, the veteran unleashed and unstable. Max Payne relates this old fear to the contemporary conflicts in the Middle East. Then there are the big pharmaceutical companies, who are achieving the sort of status that lawyers once held: despised, castigated as money-grabbing and the reason behind the decline of the American Dream. Starkly – this is not a film of nuance – two modern horrors are identified.

Frankly, it is only these two concepts that make the film bearable. The action sequences are derivative of The Matrix, without the playfulness. Wahlberg sleepwalks and no-one else even has a character. Surprise after surprise rip continuity to pieces. Portentous epigrams struggle to justify extreme violence and multiple murders and even the simple morality is undermined when Payne necks the naughty drug and goes on a killing spree. Amoral and tedious, Max Payne is intellectually and spiritually repulsive, and no cool flying monsters can excuse it.

'The Nativity', Part One: A love triangle like no other

Evacuation Stations: Memoir of a Boyhood in Wartime England