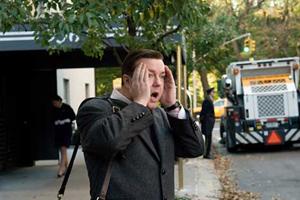 
So here it is, Ricky Gervais' first lead role in a Hollywood film, and a romantic lead at that. Will the chubby funster melt our hearts? Well, sort of. In an unexpected twist, Gervais isn't that funny but does manage to pull off the dramatic side of things quite convincingly. Perhaps this is a uniquely British viewpoint. We're used to his high-pitched, exasperated outrage from his sitcom Extras and on his regular TV appearances, but this trademark comedy manoeuvre has certainly lost its charm and makes for few laughs. Nonetheless, Gervais deserves credit for braving a sincerity not previously seen. He plays Dr. Bertram Pincus, a lonely, misanthropic dentist who dies for seven minutes during a routine operation and awakes with the ability to see ghosts. One of the ghosts, Frank (Greg Kinnear), pesters him to break up his widow Gwen's (Téa Leoni) relationship. Naturally, the moody dentist begins to thaw and falls for Gwen, making him a better man.

It's a familiar story. Charles Dickens wrote the ‘grouch redemption via supernatural intervention’ prototype with A Christmas Carol. If anything, Ghost Town is a step backwards; its ghosts can't even time travel! But there are lots of modern influences too. Obviously Pincus "sees dead people" á la The Sixth Sense and then there's the Patrick Swayze opus Ghost with its broadly similar plot (rest easy, Gervais doesn't strip to the waist for some saucy pottery). There are touches of Groundhog Day too with its wisecracking cynic lead. But most reminiscent is As Good As It Gets, another redemption story set in Manhattan's Upper East Side that had Jack Nicholson as its rude neurotic and which also starred Greg Kinnear. That film won Oscars, Ghost Town won't. It's haunted by all these predecessors and never establishes its own identity. The settings – Central Park, Museum of Natural History – have all the meaning of a postcard. The apartment buildings with doormen and plush cocktail bars continue the sterile, upper middle class, urban fairytale. And the soundtrack is pure Hollywood – a rich, sumptuous and safe sound that is as snug as open fires and magical as Christmas but clichéd as hell. In many ways, writer-director David Koepp has got the classic New York romantic comedy he clearly desired, but with its homogeneous feel, was adhering to that template such a good idea?

Thankfully, David Koepp is a much better writer than director. His CV is packed with modern Hollywood classics; Jurassic Park, Forrest Gump, Mission: Impossible, Men in Black, Spider-Man, to name but a few. As a screenplay, Ghost Town is a fair addition to that list. It's well-paced and goes down smoothly. In fact, the sub-plot in which Pincus is pestered by different ghosts to help their dearly remaining is set up so well that one can't help but wish the film saw Pincus spend more time with these other characters. However, such is Koepp's skill, that the sub-plot delivers an emotional punch that few could have predicted.

What's strange about this rom-com is that there is no kissing. Stranger still, you won't miss it. Just as understatement defines Ricky Gervais’ performance, it also defines the romance. Basic human connections are the order of the day here and it’s just as well. Pincus was so successfully set up as a misanthrope that a transformation any greater than not being a twerp would have been too much.

In light of recent successful rom-coms, Knocked Up for example, Ghost Town even with all its clichés is a pleasant experience. It’s hard to say whether it underused the talent of its three leads, but the ‘less is more’ attitude of this film works just fine as it is and we should be grateful for that at least.

Marriage: What’s in a name?

Roads to Rome: A Guide to Notable Converts from Britain and Ireland from the Reformation to the Present Day