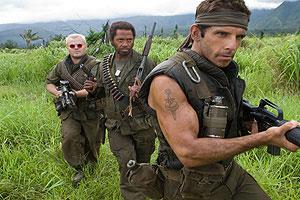 
Love him or loathe him, there is no denying Ben Stiller is Hollywood’s reigning king of comedy. Together with his “Frat Pack” buddies Owen Wilson and Vince Vaughn, he has starred in some genuinely funny films such as Dodgeball and Starsky and Hutch. And perhaps the funniest of all these, the model spoof feature, Zoolander was also directed by Stiller.

Team that fact with a super-sized advertising campaign, and it’s fair to say that expectations were high for Stiller’s latest foray into directing, Tropic Thunder.

This satirical comedy focuses on the production of a macho war epic of the same name. Our star/director plays Tugg Speedman, an action hero in need of his next hit movie. Starring along side him is five time Oscar winner Kirk Lazarus (Robert Downey Junior) and low rent comedy star Jeff Portnoy (Jack Black).

After several rather costly errors and an on-set war between the superstar egos, director Damien Cockburn decides the only way to get his epic made is to go guerilla style and he promptly dumps his actors in the middle of the Vietnam jungle. They must try to find their way out while dodging some slyly placed pyrotechnics then voilá, movie made. Or so Cockburn hopes.

But of course his plan doesn’t quite go according to plan and before long, the hapless film stars are being hounded by the Flaming Dragons, a group of heroin farmers who think they are under attack from American soldiers.

So the plot, while slightly dotty, is an amusing one (I couldn’t help but imagine how Brad Pitt, George Clooney and Matt Damon would fare were the situation for real) and individually the characters are all funny. Highlights include the drug-addled Jeff Portnoy being forced to go cold turkey in jungle terrain and the fact that Kirk Lazarus is such a devotee of method acting that he undergoes surgery to change the colour of his skin so he can become “the first white actor to play a black man.” Stiller is also amusing as the slightly dim Speedman (think Zoolander in the jungle) who is desperate for an Oscar nomination.

There is also a surprise cameo from Tom Cruise, playing the grotesque studio head Les Grossman. While it sometimes crosses into cringe-worthy territory (this is Mr. Cruise after all) the role does a lot to remind audiences that he can actually be an amusing actor.

However, despite all this, Tropic Thunder for some reason never really seems to reach the same comic heights as some of its Stiller-led predecessors. Perhaps it is because the film sometimes thinks it is being too funny and is expecting too much from its stellar cast.

While the film is obviously a comedy the very theme dictates it is part action adventure too. And these sub genres don’t sit particularly comfortably next to all the jokes.

So while no means perfect, Ben Stiller’s jungle epic is definitely worth a look. For Tom Cruise in prosthetics if nothing else.

Our Kind of Traitor