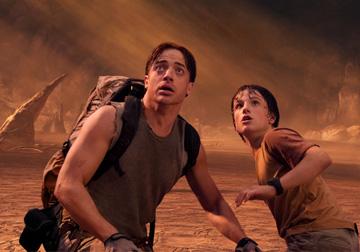 
Strangely for a film that boasts new technology and sporadic references to modern culture, Journey to the Center of the Earth  (in 3D) is a strangely old-fashioned film.  It achieves a breathless energy, ignores characterisation and lacks the sophisticated scripts that have marked out Disney’s recent productions.  All three of the main characters – including the ever-wooden Brendan Fraser – are ciphers and the plot is hurried along with the efficiency of a school trip around a virtual museum.

Based on Verne’s science fiction classic – the book becomes a sort of guide for the adventurer, in rather nice piece of intertextuality – Journey sets out to include as many CGI effects as possible.  Fraser plays Professor Trevor Anderson, still mourning for his lost brother, while Josh Hutcherson is his orphaned nephew who arrives for a fortnight of bonding.  When Trevor notices some sort of geological coincidence, the pair race off to Iceland, hook up with a local guide (Anita Briem) and end up tumbling beneath the surface.

Certainly, the non-3D version of this film would be tedious.  Most of the tension, the shocks and thrills depend on toothy fish leaping out of the screen, tyrannosaurus heads looming, and the audience being placed in the point of view of a careering mine train.  Moments of genuine emotion – the discovery of the beloved brother and father’s corpse, the threat to Fraser’s laboratory by a corporate rival professor, the inevitable love scene at the finale – are hustled along, making way for another rollercoaster ride over rapids, down volcanic hillsides or across a subterranean ocean.  Even the jokes are mere asides to action – and the science, of course, bears no relationship to any reality.

Fortunately, Fraser’s good humoured persona – imagine a less tortured Keanu Reeves – makes an amiable guide for the drama.  Complete miscast as a renegade professor – he is utterly unconvincing whenever he explains anything – he is a solid foil to Josh Hutcherson, his alienated nephew who is dragged along on the scientific investigation.  Anita Briem is a negligible love interest, helping the boys out but rarely getting in the way of their bonding.

However, this film is not about wit, character development or coherence.  It delivers non-stop action, happily borrowing from other films – particularly Indiana Jones and the Temple of Doom – and races through the action to its predictable happy ending.  Early on, the rising temperature forces the heroes into a desperate escape: this heat provides most of the energy for the plot, as time runs out, they are separated and reunited before making the final flight to the surface.  The speed of each episode is impressive: the pace is relentless.  This serves to hide the various shortcomings of script and science, turning the film into a potent race to the expected end.

This is the film’s strength: it is an old-school thriller, never too violent (even the tyrannosaurus has a cartoon horror), never too wordy and enjoyable for the high jinks and absurdity.  Little is asked of the actors, or the audience, only to sit back and enjoy the ride.

Journey to the Center of the Earth: Theatrical Trailer