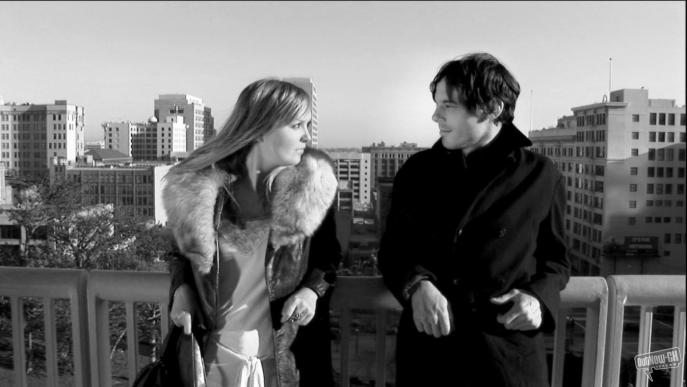 
Reportedly, the 1898 film The Kiss featured the first (forty-seven second-long) on-screen kiss.  I suppose the clue is in the title.  1898 is pretty early in the history of cinema, and that’s quite a long clinch (you may wish to experiment at home), but kissing in its various forms has been a feature of the medium ever since.  There have been puritanical characters who’ve tried to cut out all this fun, such as Fr Adelfio in Cinema Paradiso (1988). He guards the morals of his Sicilian parishioners by watching every new release before it is exhibited, and cutting the final clinch from the film.  The offending lip-synch is not discarded, however;  for the projectionist rescues them from the cutting-room floor, and splices them together into an hour-long festival of illicit kissing.  And that’s a lot of kissing.

Characters like Fr Adelfio probably still exist in certain parts of the world.  In the unlikely eventuality that they are reading this review, we advise them to stay away from In Search of a Midnight Kiss.  It’s not just the kissing, it’s the onanism, swearing and other rumbustious vulgarity that will give cause for offence.

The key to the plot is (as with the earlier film) in the title.  But if you’re not American, it may help to have something explained to you:  a midnight kiss is not any-old portent of frolic, dalliance, and good sport—it is quite specifically that ‘osculation’ which occurs at midnight on what Americans call ‘new years’.  (Kissing, incidentally, presents hacks with certain problems because one runs out of neutral words:  ‘embrace’ is quite good, but a bit suggestive.  Osculation is the scientific term, so a touch clunky, but apart from the archaic ‘buss’—which does in fact mean kiss—synonyms rapidly become graphic:  peck—which isn’t right—canoodle, caress, neck, snog, smooch.  Rather bizarrely, one thesaurus offers ‘salute’ as an acceptable alternative.  Tell that to the marines…)

The ‘midnight kiss’ therefore contains the weight of the failure of the old and expectation of the new.  In a land where competition suffuses every aspect of life, to be left without a date on that occasion is a particularly bitter failure.  And the protagonist, Wilson (Scoot McNairy) is pretty down on his luck.  He works in a video store selling pessimistic films about romantic failure to other grumpy misanthropes (a job not dissimilar to film criticism, I suppose:  if it has any authentic creativity, it lies in the social interaction, not the exalted process of writing or making).  Everything has gone wrong for Wilson:  he has lost his laptop and the screenplay with which he was going to break into movies, he’s lost his girlfriend, and even—unimaginable and appalling deprivation in Los Angeles—he has lost his car.  On top of that, he is caught by his flat-mate pleasuring himself to a photoshopped image of the flatmate’s girlfriend.

The film follows his last-ditch attempt to get that reified and elusive midnight kiss, and tracks a lonely-hearts date from first, terrifying encounter, through storm and pain to some final sense of reconciliation with life.  Shot in a grainy, and (I think) digital black-and-white that signals a formalism from the start, the piece owes a lot to Woody Allen in its feel, subject matter, and that final vaguely discontented sense of understanding.

In Search of a Midnight Kiss is gutsy, fresh, and youthful, and reads like an authentic portrayal of what it is like to be twenty-five, talented, frustrated and lost.  There’s a nice sub-plot about realism and betrayal in love, and the script cleverly resists a pat fairy-tale ending.  There’s one moment in the narrative that is slightly reminiscent of GCSE drama, but on reflection fits well into the imagined lives of the characters.

This is not, however, a film to take your uncle—the bishop from Lagos—to see on one of his occasional visits to London.

X Files: I Want To Believe