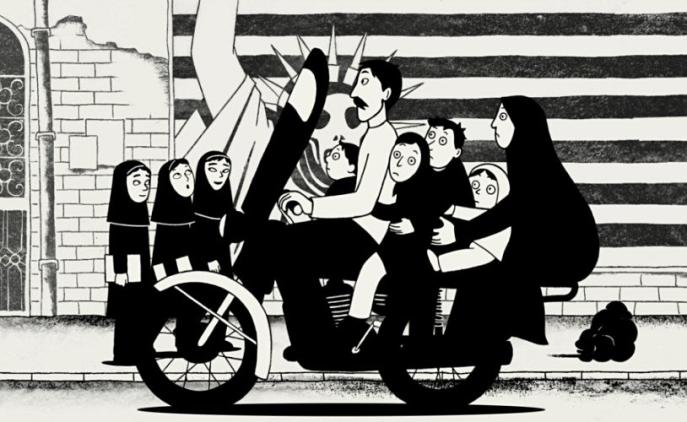 
I watched Persepolis with the utmost pleasure, that kind of delight one experiences at seeing a life fashioned out of its raw materials as something worth cherishing and sharing. Marjane Satrapi’s graphic novel sidesteps onto the screen with the kind of ease that makes you hope that it will be seen by those currently preparing the film version of Watchmen (Alan Moore’s creation, due out in 2009). The film tells the autobiographical story of Satrapi’s youth enmeshed with her experiences of Iran and Europe in the 1970s and ‘80s.

The young Marjane idolizes Bruce Lee and wants to grow up to be the ‘last prophet in the galaxy’. Later, this develops into a love for Iron Maiden and a combative intelligence that winds up the restrictive forces that emerged from the 1978 revolution. Her family’s history entwines Marxism with Iran’s dynasty of emperors, making of Marjane one of the many contradictions thrown up by mankind’s attempts to wrench reality into the shape of a belief. Through the girl’s eyes, tales of torture and imprisonment become part of her childhood games, whilst above her head her parents discuss the latest political grotesquery.

Shot as three long flashbacks in traditionally animated black and white in order to match the style of the original novel, Persepolis is an example of near-flawless story telling. Its manipulation of moods uses the restrictions of black and white to create a tonal flexibility – mystery, violence, simplicity, agony – that matches the extremes of Marjane’s adolescence. The horror of the politics is held up as a terrible farce, a child’s shadow theatre with cardboard puppets: the success lies in the emotional connection with the animated figures, and there were tears around me in the audience. Despite the seriousness of the content, the story allows time for its watchers to breath and smile – Marjane’s grandmother explaining the secret of her still-youthful breasts, or a tetchy alliance between God and Marx energising a depressed Marjane.

The medium allows for the kind of plasticity that standard film, even with its magician’s box of Beowulf-enriching special effects, can’t achieve. Animations carry with them different expectations, and so the directors are able to mix up Marjane’s internal world with the physical reality around her: the depiction isn’t a “real” one in the same way as it would be if actors were to be seen on the screen, so the audience are transported somewhere between fairyland and a place where people pick their nose waiting to cross the road. Despite this distancing effect, Satrapi’s vision of Iran is brought closer to the viewers: Marjane complains that in Europe, Iranians are thought of as ‘crazy fascists who spend all our time killing each other’, and Satrapi has explained that part of her motivation to write the Persepolis series was to be able to show her Parisian friends a different side of life in Tehran.

Marjane’s grandmother provides the vocalisation of the film’s morality: integrity and individual responsibility are the grails, seen in the light of the regime’s violent attempts to organise public and private life to fit its wishes. Its liberal flag flies throughout the film, with the pleasures of parties, alcohol and romance acting as the counterbalance to the Revolutionary Guards. In this way it is reminiscent of books like Milan Kundera’s The Book of Laughter and Forgetting, where the world of the flesh becomes a hideout from armed ideas. However, this love of liberality isn’t a stylish Europhilia on behalf of Marjane’s family; she makes it clear that Iran is her beloved home, and that repression is not her country’s natural state.

Persepolis is one of the few films I’ve seen that have engaged me far beyond adrenal or emotional titillation. Its abrupt ending left me grateful that amidst the hundreds of films made each year, this one had found its way to being created.

The fair minimum: is the Living Wage enough?